They took everything: her family, her home, her childhood.

By the age of nineteen, Raven has spent most of her life in the sprawling slums of America, fighting as a rebel against the dictatorship. When the rebellion steals an experimental time-travel device, she travels back five decades to the year 2013. Her plan: assassinate the future dictator when he is still young and vulnerable, long before he comes to power. She must move fast to reshape history, because agents from her own time are on her trail, ready to execute her on sight.

Raven literally explodes back in time, appearing in a lightning bolt onto a highway during a storm in 2013. A semi-truck narrowly misses her, and even though she can’t remember who she is or where she is, she reluctantly decides to go with the kindly truck driver on the road to get out of the rain. All she has is a backpack that contains some men’s clothing, a huge wad of cash, a futuristic looking cube, and a plasma gun that sears through flesh. But their trip in the big rig to a truck stop and grungy hotel (with separate rooms) is cut short just as Raven is trying to figure out why the food in the restaurant was so cheap and plentiful, and everyone is walking around so carefree. Then the men attack–using a spinning drone shooting laser beams–and Raven and the truck driver try to escape the men from the future sent to kill her. But not everyone gets out alive in this brutal, fast-paced, and action filled beginning of JL Bryan’s lastest novel.

Raven’s original world is bleak and full of war. The government is a full-on dictatorship, and she has been fighting with the rebellion supporters since she was a little girl. She’s lost her parents to the dictator’s security forces when she was eight, and she was  hidden away and turned into a soldier. She became a damned fine one at that. When the rebellion leaders find out about a time travel device developed by the government, they devise a plan to storm the scientific lab and steal it so they can go back in time to kill the dictator, hoping to change the course of history for the better. Raven was supposed to only be part of the team to storm the lab, but when the man who was trained to jump back in time for the assassination is killed, she makes the sacrifice to go in his place.

That’s when she discovers that learning about your past in bits and pieces gives you some perspective on the right way to handle things, and maybe killing Logan, the future dictator before he’s corrupted by power won’t change the future as much as the Rebellion thinks it will. So Raven has to devise a new plan, one that has her clawing her way into Logan’s life when he’s just a simple freshman at Yale, and more interested in having fun and dating instead of money and power. But Raven finds that things get much more complicated than she ever imagined the longer she stays in 2013.

Raven is a strong, smart, and charismatic. She is a fierce fighter with years of experience from living in a war torn country and also quick to think on her feet, and that makes her even more realistic and likable to me. She has her faults and getting a bit too comfortable in 2013 is definitely one of them. But who can blame her when the future is so bleak and war torn? I even found myself liking the future dictator Logan towards the middle of the book. The secondary cast of characters was kept decently small so you can keep track of everyone but they were still well developed. I especially enjoyed the trademark goofy character that JL Bryan always includes that have funny/strangely dirty names for things–in this case it was the truck driver Jebbie.

I give Nomad a five out of five. This thrilling dystopian sci-fi takes the age old question of “If you could travel back in time and stop an evil person, would you?” and explores the repercussions of changing the course of history. How would it effect your life if you alter the events of the past? Could you really kill someone to save the rest of the country? Would it even work? Raven has to answer these tough questions, and I thoroughly enjoyed discovering the answers to those mysteries in this fast paced new adult book. If you enjoy science fiction and time travel, especially if it’s to change a very dark and bleak future, then this book is for you. 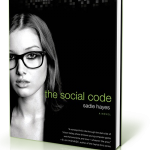 Vivid, Fantastic and Romantic! Defy by Sara B. Larson
The Morganville Vampires…

« Waiting on Wednesday – Love Letters to the Dead by Ava Dellaira
Review: Discovery by Lisa White »

4 Responses to “Review and Giveaway of Thrilling Dystopian: Nomad by JL Bryan”