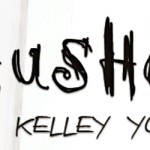 Exclusive Cover Reveal! Didn’t I Warn You? by Amber A. Bardan
BEA 2011 Recap Vlog from Heather, Pushy and Danny