He'll risk his whole heart to save her from the past

Gaby Cane was always a bit afraid of her attraction to Bowie McCayde. Even when she was fifteen and Bowie's family took her in, she had sensed his simmering resentment. Now ten years later, she's an aspiring journalist who can hold her own with any man professionally, the dark shadows of years gone by far behind her. Then Bowie strides back into her life—only this time, he needs her, and the pull of loyalty to his family is too strong to ignore.

When Bowie asked Gaby to help save his family's Arizona ranch, he never expected the girl he once knew to return transformed into a stunning, successful woman. As they work together, Bowie is shocked to find that her innocence and beauty stir a hunger he can't deny. But the rogue rancher can sense something holding her back, and he's determined to uncover the terrible secret Gaby is fighting to keep hidden…

Fire Brand was one of those books that I really enjoyed reading, especially since I’ve been branching out of my usual genres. This western romance is set in Arizona in the 1980s–before cell phones or the internet, and when computers were only desktops. I’m starting my review with this because I had one hell of a time figuring out what time frame this book was set in. I opened my Kindle and began to read, but only with some vague historical references from the characters and the lack of modern technology was able to eventually narrow the time frame down. It was when I sat down to write this review that I saw that this book is a reissue of a previously published book from 1989, and wish I would have known that going in. I think I would have been able to enjoy this one more with the tint of the attitudes and styles of the time period.

Gaby Cane is pretty fearless and driven when it comes to her job as a reporter, but when it comes to personal relationships, she shies away from any physical contact with men, and she doesn’t liked to be touched in general. Having fled Tennessee for Arizona to start a new life when she was 15 years old, she wound up at Casa Rio, the McCayde’s sprawling ranch, where she’s taken in and treated like the daughter they never had. But Bowie McCayde–the son they did have–resented her presence and his mother’s doting on Gaby, so he made himself scarce over the years. Gaby flourished there, always admiring Bowie from afar but never getting close to the handsome, hardworking head of a construction company.

Ten years after Gaby came to live with his parents, Bowie needs Gaby’s help since he’s never been close to his now widowed mother. When Aggie McCayde goes on a cruise and comes back with a new boyfriend, Bowie wants to make sure that he’s not a gold digger looking to get a chunk of their successful ranch. He enlists Gaby’s help to suss out if this guy is on the up and up or not. Bowie didn’t expect to have to fight a growing attraction to the grown up and confident at work Gaby. She gets him tied up in knots inside, but she’s so skittish he doesn’t know how to approach her. On a professional front, he won’t sell his land to an agricultural company that’s looking to move into town, which will supposedly create jobs that Lassiter sorely needs. Bowie knows that they’ll destroy the already tenuous water supply that his cattle rely on, so he refuses to give in. Gaby’s reporter instincts kick in and she starts to investigate the agricultural company for the local paper, at first as an excuse to stay in Lassiter to keep an eye on Aggie, but then to be with Bowie.

Gaby and Bowie’s relationship gave me whiplash at times. She’s traumatized from an event in her teens so she has no experience with men, while Bowie is an alpha male all the way. He’s hot headed and says mean things that he doesn’t mean when he gets mad. He’s suspicious of her reasons for staying in Lassiter when his mother says mean things as well. Poor Gaby is caught in the middle with her sweet, trusting nature, and she definitely doesn’t have the backbone to always stick up for herself.

I give Fire Brand a four out of five. While the book does come off as dated, especially with how much of a chain smoker Bowie is and some of the ways Bowie treated Gaby, I really enjoyed reading the two love stories along with the agricultural company side story and a lot of the historical Arizona information. Bowie was very hot and cold towards Gaby, but he was often sweet, charming, and soft spoken to her. Their blooming relationship was very fun to see develop throughout the book. Fire Brand had one of the most annoying, selfish, and self-centered parents that I’ve ever read, though. Both Aggie and her boyfriend act like immature children when Bowie interferes in their relationship, and Aggie gets downright nasty with her son and Abby. I would be ashamed to call that woman mother. Overall, Fire Brand was a nice stroll back to the way things used to be, before technology was so front and center. I forgot how hard it was to investigate things without the internet and Google! I worked for over 16 years as a newspaper reporter on both weekly and daily papers. In between reporting jobs, I had a son, Blayne, my greatest creative achievement. I love iguanas and most other animals, and am the biggest geek on earth. If it’s electronic, and non-lethal, I probably have one. I was always the kid who was out of step with the rest of the world, and I still am. My father was a college professor, so my sister and I grew up not quite understanding what prejudice was.

I traveled a lot when I was more mobile than I am now, and I never met a person I didn’t like. Writing books is more than a job to me, it’s my life, next to being a wife, mother and grandmother. I am a person of faith, but I respect all religions and all cultures.

I write romantic suspense for HQN books, mass market and series contemporary romance for Harlequin, and science fiction novels for Luna Books. In my spare time, I sleep. 🙂

Enter the Rafflecopter widget below for your chance to win a $25 Amazon Gift Card. 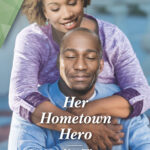 Her Hometown Hero by Jacquelin Thomas