In honor of the release of the latest installment of Gena Showalter’s Lords of the Underworld series, THE DARKEST TORMENT, all of the books are going on tour this month across several great blogs. I’m shining a spotlight on the fifth book, The Darkest Passion. Be sure to check out the Giveaway at the end for your chance to win a complete signed set of the entire Lords of the Underworld series! Series: Lords of the Underworld #5

For weeks, the immortal warrior Aeron has sensed an invisible female presence. An angel-demon-assassin has been sent to kill him. Or has she? Olivia claims she fell from the heavens, giving up immortality because she couldn’t bear to harm him. But trusting – and falling for – Olivia will endanger them all. So how has this mortal with the huge blue eyes already unleashed Aeron’s darkest passion?

With an enemy hot on his trail and his faithful demon companion determined to remove Olivia from his life, Aeron is trapped between duty and consuming desire. Worse still, a new executioner has been sent to do the job Olivia wouldn’t…

The Lords of the Underworld were the guardians of the Gods. Now living on Earth, each one with a different demon from Pandora’s box living inside of them, this series is very intriguing. Gena Showalter writes the best alpha male and strong female interactions, full of steamy scenes as they clash and tangle. Definitely my kind of series.

And the upcoming release… Series: Lords of the Underworld #12

Driven to his death by the demon of Distrust, Baden spent centuries in purgatory. Now he’s back, but at what cost? Bound to the king of the underworld, an even darker force, he’s unable to withstand the touch of another…and he’s quickly devolving into a heartless assassin with an uncontrollable temper. Things only get worse when a mission goes awry and he finds himself saddled with a bride—just not his own.

Famed dog trainer Katarina Joelle is forced to marry a monster to protect her loved ones. When she’s taken hostage by the ruthless, beautiful Baden immediately after the ceremony, she’s plunged into a war between two evils—with a protector more dangerous than the monsters he hunts. They are meant to be enemies, but neither can resist the passion burning between them…and all too soon the biggest threat is to her heart.

But as Baden slips deeper into the abyss, she’ll have to teach him to love…or lose him forever. of the spellbinding Lords of the Underworld, Otherworld Assassins, and Angels of the Dark series, as well as two young adult series–Everlife and the White Rabbit Chronicles–and the highly addictive Original Heartbreakers series.  In addition to being a National Reader’s Choice and two time RITA nominee, her romance novels have appeared in Cosmopolitan (Red Hot Read) and Seventeen magazine.  She was interviewed on Nightline and has been mentioned in Orange is the New Black.  Her books have been translated in multiple languages.

She’s hard at work on her next novel, a tale featuring an alpha male with a dark side and the strong woman who brings him to his knees. You can learn more about Gena, her menagerie of rescue dogs, and all her upcoming books at genashowalter.com or Facebook.com/genashowalterfan

Other series written by Gena:

Enter the Rafflecopter widget for your chance to win a complete signed set of the Lords of the Underworld series!
a Rafflecopter giveaway 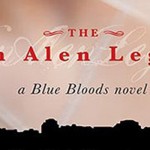 Super Six Sunday – Favorite Books of 2013 So Far…
The Assignment by Jade A. Waters – 10 Interesting Facts About The Assignment & Giveaway