hy72ir6n49g5z831meqb Oh how much I wanted to love you! Second Star, Plus One & The Here and Now • Bewitched Bookworms

Ah … We’ve all been there. Books you picked up and truly wanted to love, but  then..  ended up not loving them, at all! So here are a few books that had lots of potential but weren’t just books for me.

So here I have three books that simply didn’t do it for me. They are not complete reviews, but rather rambling thoughts why they didn’t work for me! It takes guts to deliberately mutilate your hand while operating a blister-pack sealing machine, but all I had going for me was guts.Sol Le Coeur is a Smudge—a night dweller in an America rigidly divided between people who wake, live, and work during the hours of darkness and those known as Rays who live and work during daylight. Impulsive, passionate, and brave, Sol deliberately injures herself in order to gain admission to a hospital, where she plans to kidnap her newborn niece—a Ray—in order to bring the baby to visit her dying grandfather. By violating the day-night curfew, Sol is committing a serious crime, and when the kidnap attempt goes awry it starts a chain of events that will put Sol in mortal danger, uncover a government conspiracy to manipulate the Smudge population, and throw her together with D’Arcy Benoît, the Ray medical apprentice who first treats her, then helps her outrun the authorities—and with whom she is fated to fall impossibly and irrevocably in love.Set in a vivid alternate reality and peopled with complex, deeply human characters on both sides of the day-night divide, Plus One is a brilliantly imagined drama of individual liberty and civil rights—and a compelling, rapid-fire romantic adventure story

Seriously, the cover is made of awesome and I absolutely love the two kissing faces. But, also the synopsis was so promising. Sadly though, the book didn’t do it for me.

First off, the world building didn’t make sense for me, forcing people to live either Day or Night felt completely forced for me and I didn’t completely buy the reasoning.

Moreover the romance wasn’t convincing either, and they went from getting to know each other to being completely in love.

In addition, there were some moments where the language was really really dark and krass and in my opinion way over the top and not suitable for teens. I was so shocked over what this girl (a secondary character) said, and if I am shocked it should mean something as I don’t usually care.

The Here and Now An unforgettable epic romantic thriller about a girl from the future who might be able to save the world . . . if she lets go of the one thing she’s found to hold on to.Follow the rules. Remember what happened. Never fall in love.This is the story of seventeen-year-old Prenna James, who immigrated to New York when she was twelve. Except Prenna didn’t come from a different country. She came from a different time—a future where a mosquito-borne illness has mutated into a pandemic, killing millions and leaving the world in ruins. Prenna and the others who escaped to the present day must follow a strict set of rules: never reveal where they’re from, never interfere with history, and never, ever be intimate with anyone outside their community. Prenna does as she’s told, believing she can help prevent the plague that will one day ravage the earth. But everything changes when Prenna falls for Ethan Jarves. From Ann Brashares, the #1 New York Times bestselling author of The Sisterhood of the Traveling Pants series, The Here and Now is thrilling, exhilarating, haunting, and heartbreaking—and a must-read novel of the year.

Time Travel is always an exciting topic! So Prenna and her family come from the future and live among the present day people, yet they are not allowed to not interfere and do not form relationships with them. Reason is somehow weird and not completely convincing. Again I’m having huge logic problems with this story , but I think was mostly threw me off was the pacing and the time travel logics (or lack thereof). Now, don#t get me wrong – time travel barely makes sense in the first place – but when done right, I don’t start doubting the reasons I get presented with.

Again, we have a nearly instant love, even though they knew each other before for quite a while, but then suddenly they are highly in love. I didn’t feel the chemistry between them and didn’t didn’t by their deep connection. Sorry. A twisty story about love, loss, and lies, this contemporary oceanside adventure is tinged with a touch of dark magic as it follows seventeen-year-old Wendy Darling on a search for her missing surfer brothers.

Wendy’s journey leads her to a mysterious hidden cove inhabited by a tribe of young renegade surfers, most of them runaways like her brothers.

Wendy is instantly drawn to the cove’s charismatic leader, Pete, but her search also points her toward Pete’s nemesis, the drug-dealing Jas. Enigmatic, dangerous, and handsome, Jas pulls Wendy in even as she’s falling hard for Pete.

A radical reinvention of a classic, Second Star is an irresistible summer romance about two young men who have yet to grow up–and the troubled beauty trapped between them.

Oh look at this wonderful cover! So so wonderful, right? Plus I love Peter Pan and the idea of an Retelling. So I went into this book all excited! Sadly, very soon I found myself being super confused. I had no clue anymore if this was reality or fantasy. Wendy is searching for her lost brothers and finds herself at a beach with Pete, there she even stays and leaves her parents without knowing where she is. Reckless and stupid in my book.

Enter in Jas – a drug dealing guy and we enter a confusing love triangle that completely threw me off.

Again, the whole story leaves a dream like impression and I was often so very lost and didn’t know anymore what was real and what not, and while that might be exciting for some people, it was simply not for me!

So, those were three books that I wanted to love but didn’t . I’m sure they are exciting for some readers and I hope you were among them.

Did you read these books? Did you like them? 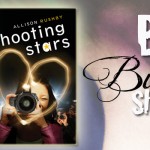 Book Birthday Shout Out {28}
And the winners are….

Dear Celaena – Yours, Danny | Heir of Fire by Sarah J Maas
Blog Loving Time!
Discussed! by Danny – Books Into Movies, or better not?

« The Dark Caravan Cycle – Contests and other exciting things about Exquisite Captive by Heather Demetrios
Sunday with the Bookworms {2} with The Midnight Thief, Never Have I Ever, Rot & Ruin and more! »

7 Responses to “Oh how much I wanted to love you! Second Star, Plus One & The Here and Now”