First it was SLUT scribbled all over Lizzie Hart’s locker.

Lizzie’s reputation is destroyed when she's caught in bed with her best friend’s boyfriend on prom night. With the whole school turned against her, and Angie not speaking to her, Lizzie takes her own life. But someone isn’t letting her go quietly. As graffiti and photocopies of Lizzie’s diary plaster the school, Angie begins a relentless investigation into who, exactly, made Lizzie feel she didn’t deserve to keep living. And while she claims she simply wants to punish Lizzie’s tormentors, Angie's own anguish over abandoning her best friend will drive her deep into the dark, twisted side of Verity High—and she might not be able to pull herself back out.

Debut author Chelsea Pitcher daringly depicts the harsh reality of modern high schools, where one bad decision can ruin a reputation, and one cruel word can ruin a life. Angie’s quest for the truth behind Lizzie’s suicide is addictive and thrilling, and her razor-sharp wit and fierce sleuthing skills makes her impossible not to root for—even when it becomes clear that both avenging Lizzie and avoiding self-destruction might not be possible.

The S-Word by Chelsea Pitcher is a uniquely refreshing take on the YA genre, one in which the ethos of noir fiction is intimately blended with the contemporary frailties and foibles of the under 18 set.  Dark and definitely mysterious, the story is told through the perspective of Angela Lake, the cynical and deeply hurting former best friend of Elizabeth Hart, Verity High’s Suicide Slut.  Angie is an interesting mix of dark and jagged angels:  a Betty Page, pin-up cheer leader with a serious tough streak, she’s equally at home gliding through the glittering popular kids as she is rough talking those who get in the way of her quest to find out who drove Lizzie to kill herself.  And the fact that we see everything and everyone through her eyes makes this book a deliciously dark and compulsively addicting read.

Character development is at the forefront in The S-Word.  Angie was obviously a favorite of mine, although every character we meet is richly detailed and fleshed out.  Without weighing us down with descriptions, Chelsea Pitcher creates a cast of vibrant and fascinating kids and through them a world where one senses that anything might happen, so long as that anything had more to do with the seedy underbelly of life than the puppies and lollipop world these kids pretend to live in when in front of their adults.

Everything about this book drew me in.  The characters, the plot development and the mystery behind who killed Lizzie.  While by about half-way through the book, the answer is obvious, it becomes the aftershocks of that event that move center stage and in the end, Angie not only up ends the entire school with the consequences of their actions but comes to find some solace and healing of her own.

Rich, dark and deliciously fascinating, this book is a perfect read for a cool fall evening. 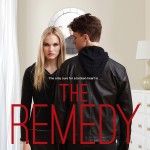 10 Responses to “Review: The S-Word by Chelsea Pitcher”