It’s one thing to bring the woman you love back into your life. It’s another to try and keep her there. For Dex Foray, con­vinc­ing Perry Palomino to open her­self to their bur­geon­ing rela­tion­ship has been more chal­leng­ing than hunt­ing ghosts, bat­tling demons and stalk­ing Sasquatch com­bined. Add in the fact that the only way they can keep their Exper­i­ment in Ter­ror show run­ning is to take on a third part­ner in the form of the mys­te­ri­ous Max­imus Jacobs — all while inves­ti­gat­ing a sin­is­ter voodoo sect in New Orleans — and you’ve got the per­fect South­ern storm and a recipe for dis­as­ter. Luck­ily, Dex has never been one to back down, even when his life –and heart — are on the line.

I’ve really loved the Experiment in Terror series so far, but all six books have been written in the female main character’s point of view. Come Alive is the first book where we get an unfiltered and uncensored look at what it is to be Dex Foray, and I’m pleasantly surprised to say that I really enjoyed getting that glimpse for a change of pace.

Book seven starts off right where Into the Hollow left off, with Perry and Dex dealing with the aftermath of their disastrous hunt for Sasquatch in Canada that left one human guide dead and a couple of llamas as casualties too. Their relationships is a big question mark even though they are currently living together in Dex’s apartment in Seattle, but soon they find that it’s easy to be together and forget the rest of the world exists–especially that they still have a job to do. Since the police confiscated their footage as evidence, they are forced to go on another assignment to film a new episode of Experiment in Terror. But their boss doesn’t trust them to get the job done, not wreck all of the equipment, and keep their sponsors happy, so he adds a new partner into the mix–a man that both Dex and Perry are intimately familiar with, and definitely not happy to be working under.

Of course their partner is Dex’s ex-bestfriend from college and the man who tried to get Perry committed when she was possessed by a demon, Maximus, and he jets everyone off to his hometown of New Orleans to investigate a haunted house. But his old acquaintances have other ideas of what needs to be looked into, and soon Perry, Dex, and Maximus find themselves deep in Voodoo, Zombies, and duplicity.

Dex is funny, sexy, and an over the top romantic in his own way. He tries to bring Perry out of her shell and show her just how wonderful she is, but there’s something holding her back. Since this is Dex and Perry, the period of smooth sailing for these two is short lived, but it’s very nice while it lasts. It’s strange to not be inside of Perry’s head after constantly knowing what’s going on with her for six books, and you can feel Dex’s frustration at not knowing exactly what’s up with her most of the time.

Come Alive gets a big old five out of five from me. It was great to see things through Dex’s eyes for once, and the revelations that come up with Maximus were wild! The horror was stepped up quite a bit in this installment, and even I was a little bit uncomfortable with the climax due to claustrophobia issues (but that makes for a great read). Definitely a great installment full of thrills, chills, and moments that make this series great.

Book Review: Every Other Day by Jennifer Lynn Barnes
Say Yes To What’s Next by Lori Allen – #TLCBookTours Excerpt 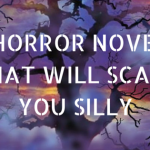