When the team is sent back to the stormy Oregon coast to investigate a haunted school, Perry wants to use the opportunity to reconnect with her family and reintroduce Dex into their lives. Only Perry’s not the only one who’s reaching out – her grandmother Pippa has started appearing to her with disturbing warnings and Perry’s presence at the school has ignited a chilling new wave of supernatural phenomenon. Once used a century ago as a sanatorium to house children dying of tuberculosis, the school’s past residents are slowly coming back to life and with one thing on their mind. They want someone to play with, someone to join them. Forever.

Even when dead, some children get whatever they want.

And they want Perry.

The Experiment in Terror series is one of my favorite horror series out there. Great story lines, interesting character development, and intriguing new settings and paranormal aspects for each book keep me coming back for each new installment. Ashes to Ashes is the eight book in this series, and after spending the entire previous book in sexy, self-assured Dex Foray’s point of view and loving every minute of it, I wasn’t sure if I would be able to sink back into Perry Palomino’s psyche that easily.

Two months after the events in New Orleans (and the seventh book, Come Alive), Dex and Perry have settled into a nice life in Seattle. Their friend Rebecca has joined the Experiment in Terror show behind the camera, managing their locations and the logistics of the shoots. It’s been eight seemingly long months since Dex and Perry first met in a haunted light house on the Oregon coast, and a new case for the show brings them to the same area to investigate a haunted school for gifted artistic kids that just happened to also once have beeen a hospital for children with tuberculosis early in the twentieth century. Perry sees this trip back home as a chance to reconnect with her family, even though they barely speak since they’d tried to commit her when she was possessed by an evil spirit a few books ago. Her family has always blamed Dex for what happened to Perry, so they will never accept their relationship or the fact that she chose to live with him in Seattle. Even though the odds are stacked against him, Dex is willing to try to win them over—for Perry.

The school has some of the creepiest ghosts that Karina Halle has written. The upper floors of the school are abandoned and crumbling while the lower level is finished, and the body shoot offers much room for spirits of dead patients and doctors to hide and skulk about, just waiting to attack Perry and Dex. Rebecca isn’t even spared the attention of the hauntings in this one, even though she normally can’t see the supernatural.

Dex is amazing in this book. He’s his usual self-assured, dirty talking, flirty self, but he’s also super romantic and protective with Perry. Nothing is more important than her well-being, and he’s very clear with his intentions throughout the book. They are so clear throughout that it was a bit too predictable, but Perry didn’t seem to get it.

That leads me to Perry. She seems to have taken a few steps back in character development for some reason. She’s second guessing everything, from Dex’s feelings for her, to where she’s at in her life, to what her friends see in her. I spent a large part of this book wanting to smack Perry and tell her to open her eyes, to stop being stupid. At this stage of this series and all that she and Dex have went through to be together, she should be past most of her self-doubt by now.

I give Ashes to Ashes a four out of five. With the scariest ghosts yet and the creepiest setting, Dex and Perry have certainly met their match with a place that can mess with them in some surprising ways. While Dex is moving forward nicely in a positive way–he knows exactly what he wants his relationship with Perry to be–Perry is busy seesawing back and forth about everything. Lucky for her, Dex will stand by her through anything. The writing is descriptive, atmospheric, and witty in spots just as I expect from a Karina Halle book, with a good dose of sexy to spice things up. Only one more book is left in this series, and hopefully we don’t have to wait long since this one ended on one hell of a cliffhanger. 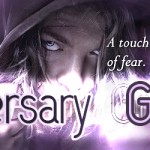 6 Responses to “Ashes to Ashes by Karina Halle”