Meet the Mitchell brothers of Fool's Gold, California—five gorgeous men who've left a trail of broken hearts in their wake…

Maya Farlow learned the hard way to depend only on herself, so when she fell too deeply for the bad-boy charms of Del Mitchell, she did the only thing she could—she ran. Stunned, Del left Fool's Gold to make his name and fortune in extreme sports.

Now ten years later, Maya's been hired to promote her hometown's new slogan, The Destination for Romance. The celebrity spokesman is none other than Del, the man she dumped but never forgot. Awkward!

Although Del's not the type to hold a grudge, he's determined to avoid falling a second time for the woman who broke his heart. He's a daredevil, not an idiot. Trouble is, in all his adventures, he never found a rush as exhilarating as Maya's kiss. Maybe risking his heart will prove to be the biggest thrill of all…

I was introduced to Susan Mallery’s wonderful books through another one of TLC Book Tours offerings earlier this year with the offer to host an excerpt and review for the amazing start to a new series, The Girls of Mischief Bay (Excerpt, Review). When the next installment in her Fool’s Gold series came up, I happily agreed to host another excerpt and review tour. Susan’s writing has such a smooth and open way about it that feels as if you’re eavesdropping on familiar friends, observing their lives from just over their shoulders. And you sure couldn’t beat the way this book opened with the Mayor looking at naked butts on the Internet. I was definitely intrigued!

Maya and Del spent one very hot summer together that left them engaged, but with Maya’s fear of thinking anyone could actually love her, she fled picturesque Fool’s Gold for college, leaving heartbroken Del behind. While Maya went on to pursue her dreams of becoming a broadcaster in Los Angeles to less than stellar results, she did become quite successful behind the camera and decided to take the Communications Director job for her old hometown, if only to lick her wounds and get some downtime.

Del was all set to take over his family’s local touring business, but when he was left heartbroken when Maya dumped him, he couldn’t stay in Fool’s Gold anymore. He fled and put his outdoors sports to good use, becoming an extreme sportsman and entrepreneur, only returning to Fool’s Gold when necessary. But with his father’s 60th birthday approaching at the end of summer, he couldn’t stay away any longer.

Does Love Get a Second Chance When Trust Is Broken?

Almost immediately Del and Maya are thrown together by the Mayor to film a series of commercials and videos to promote tourism to Fool’s Gold. Even though Maya has her doubts about working together with Del, he shows no reservations or animosity whatsoever, and so begins their renewed friendship and the possible rekindling of a romantic relationship. But with each of them so afraid to voice their feelings and Del’s distrust of Maya over their breakup ten years ago, will either one ever face up to them enough to finally come clean? Or will they dance around the truth in their working relationship–and they do work so well together that more than the mayor notices and wants to hire them–for so long that it will be too late?

Maya is such an independent, successful, career-oriented woman, but she saw how her mother’s failed relationships and their bitter mother-daughter relationship taught her that she could only rely on herself to get by. When she fell hard for Del, it scared her so much that she didn’t think he’d really meant any of it. After ten years apart, she was still single and she wasn’t sure why she’d never committed to anything other than her work, but she’s slowly realizing what’s been missing in her life once she spends time working with Del. Even though she’s stayed friends with his mother Elaine–and she’s forced to keep a very important secret from the boys and Elaine’s husband in this book–Maya knows what it means to be loyal and true–now.

Del is floundering in his professional life now, after selling his board business for a ton of money, he doesn’t really need to work again. But his artist father never thought much of his talentless son’s career choices, so he doesn’t really feel any pressure from his family. What he does know is that he doesn’t want to settle down in one place. He’s too restless for that. Traveling the world makes him happy, and he starts to wonder if that’s something that would make Maya happy too. He’s a one woman kind of man, and that’s certainly why he broke things off with his ex–a famous figure skater with a cheating problem.

This Town Is Full of Quirky, Meddling People–But They Are Good Intentioned…

Fool’s Gold has a few side characters that try to give these two the push they need. The two cable access tv show hosting elderly women were a raunchy, nosy, and quite stealthy, “Don’t really care because we’re old” hoot, while Mayor Marsha even did some gentle prodding of her own behind the scenes. Del’s mother Elaine even puts her nose out there a few times, but other more pressing issues arise. Maya’s cadre of girlfriends were all very interesting, and I can’t wait to see more of them in future books.

I give Thrill Me a 4.5 out of 5. I love jumping right in with Susan Mallery’s books. You’re just launched right into the action and it feels like you know the characters already, and in this case, the series is eighteen books in but I had no problem starting the series with this book. The romance and emotion were realistic and the characterizations were well drawn. Del and Maya have to deal with not only their past problems, but also Del’s ongoing, long-term family issues as well as sibling fights, illness, and patriarchal loftiness.  Fool’s Gold is vividly painted and I can’t wait to see which Mitchell brother will be featured in the next book!

millions of readers around the world with books described as “immensely entertaining, intensely emotional” (RT Book Reviews), “hilarious” (Fort Worth Star-Telegram), and “heartwarming” (Publishers Weekly). One major retailer recently described her as “the queen of romantic fiction.” While she deeply appreciates the accolades of critics and booksellers, Mallery is even more honored by the enthusiasm of her readers and the word-of-mouth that catapults her toward the top of the bestsellers lists time and again.

She is the author of more than 150 novels, including the uber-popular Fool’s Gold romances. This latest book,Thrill Me, introduces the five fabulously sexy Mitchell brothers. Del Mitchell, the eldest, has just returned to his California hometown after making a fortune designing a sky surfboard that cemented his status as an extreme sports superstar.

Do you have a favorite Susan Mallory book? Are there any series that you’ve started reading in the middle and had no problems getting into them? 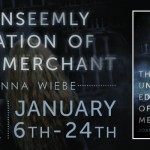 2 Responses to “Thrill Me by Susan Mallery”