hy72ir6n49g5z831meqb Spellbinding and Aaamaazing! The Girl at Midnight by Melissa Grey • Bewitched Bookworms

For readers of Cassandra Clare's City of Bones and Leigh Bardugo's Shadow and Bone, The Girl at Midnight is the story of a modern girl caught in an ancient war.

Beneath the streets of New York City live the Avicen, an ancient race of people with feathers for hair and magic running through their veins. Age-old enchantments keep them hidden from humans. All but one. Echo is a runaway pickpocket who survives by selling stolen treasures on the black market, and the Avicen are the only family she's ever known.

Echo is clever and daring, and at times she can be brash, but above all else she's fiercely loyal. So when a centuries-old war crests on the borders of her home, she decides it's time to act.

Legend has it that there is a way to end the conflict once and for all: find the Firebird, a mythical entity believed to possess power the likes of which the world has never seen. It will be no easy task, but if life as a thief has taught Echo anything, it's how to hunt down what she wants . . . and how to take it.

But some jobs aren't as straightforward as they seem. And this one might just set the world on fire.

Who doesn’t look at this cover and wants to jump into a different world this book promises right away? The cover looks magical and I was hoping to find a magical story between these pages.. and oh boy … I did!

A Mysterious World full of magical creatures hidden among our own mortal world..

This could describe many amazing stories and quite frankly it’s often a concept that works for me. And, yes I am going to compare it to The Mortal Instruments and Harry Potter even though The Girl At Midnight most definitely has a completely different storyline!

Echo seems to be a normal human girl, an orphan who lives in a Library until a mysterious bird like creature takes her into her world that is hidden from the mortals. As Echo gets older – she learns more and more about a seemingly pointless war between the Avicen and the Draconis (YES – Humanoid Dragons…). Both sides hunt for the mysterious Firebird that is fortold to end this war! And.. Echo is right in the middle of this treasure hunt that is getting more dangerous and mysterious by the minute!

The Firebird – where is it hidden and who will find it first? A hunt around the world!

Echo’s Forster mother (or Forster  bird) entrusts Echo with hunting down the Firebird, which remains a big mystery. Not everyone believes in it and not everyone wants if found. And then, there are the Draconis – the sworn enemy of the Avicen – are also hunting it.

The hunt was true adventure exactly they way I love it! There will be many different places Echo needs to go all over the world, from New York to Japan to Europe Echo and her unlike Allies trying to find something which is gone for centuries!

So many amazing, awesome and intriguing characters and some unlike Allies!

Echo is fierce, snarky, smart and fast and I loved this girl’s independence, strength,loyalty and sense for adventure right away. But, Echo is not alone on this hunt and they are such an unlike cast of characters and I love every one of them! Besides Echo’s soft, healing best friend – there is a colorful outcast Avicen who likes to tease and push the buttons of those around him. And then, Echo finds herself working together with two Draconis as well – and it seems like they might have a similar goal, so they end up working together. And yes, I feel head over heels about these two boys, one a prince with a wonderful soft heart and one his trusted friends who might love his friend a little more too much… I loved this bunch of intriguing characters so much!

Oh be still my heart and please, give me some romance…

The Girl at Midnight by Melissa Grey is an outstanding debut and comes with everything that makes a story amazing and makes us squeal all over it. A magical treasure hunt, a magical world right next to ours, a cast of incredible characters, a mysterious prophecy and a forbidden romance! All I can say is that everyone who loves YA Fantasy and YA Paranormal must read The Girl at Midnight!

Melissa Grey has a wonderful Pinterest Board that I loved to look at while reading!
So how about you? Do you also love these kind of settings with a world hidden besides ours, with mysterious and magical creatures? 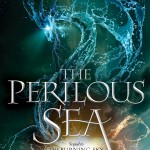 « Friday’s Five Reasons Why Reading YA Rocks! … even as an Adult!
TV Tuesday – I Dare You To Watch : Revenge »

7 Responses to “Spellbinding and Aaamaazing! The Girl at Midnight by Melissa Grey”