Happy Friday!! You remember a few weeks ago, I had Nikki Kelly here on the blog with an amazing inspirational post about her upcoming Young Adult debut LAILAH. It’s been a phenomenal post, I urge you to check out.

And I couldn’t be more excited to have Nikki here today for a fantastic Interview, and I have another fantastic Giveaway for you at the end! Nikki, I am so excited to have you here at the Bookworms again. You know I’m a big fan of you and Lailah so I’m so thrilled to chat with you!

Thank you so much for having me Danny! I am a huge fan of the Bookworms!!

This totally made my day Nikki!

OK, I know this will be a question you’ve probably been asked before, but I am such a big fan of vampires that we need to chat about them a little. So Nikki, tell me: why vampires? What makes them so exciting for you? What is so fascinating?

I am also a big fan of all things vampire! They come in all different shapes, sizes and varying levels of shininess these days, don’t they?!

I guess I just find something extremely fascinating about the idea of these immortal beings, which are immensely strong and powerful, using those traits for good or evil or both! It all depends on the vampire in question; take Jonah, for example – I find him extremely compelling because he’s in a constant state of inner conflict, simply because of ‘the what’ he is. Then you go and throw in ‘the who’ he once was, ‘the who’ he is now and ‘the who’ he is becoming and you have the beginnings of a lovely layered character full of inner turmoil—the best kind to write!

I also personally find something – dare I say it? – incredibly sexy and dangerous about a being that oozes such deadly charm! I don’t write about werewolves, for example, because I don’t find anything appealing about a person who transitions into a large dog and back again – though I have a feeling that might stem from the fact that I have a Pug…

Do you have a favourite vampire story? (Mine are Twilight – YES Twilight and the Night Huntress series, just to name my absolute favourites!)

Yes of course! For me it would be Twilight, with The Sookie Stackhouse Novels as a close second! I love what Twilight has to offer: I adore the romance and, while I like my heroines to be a bit kick-ass (something Lailah is growing into as the Saga progresses!), I am a sucker for the damsel in distress routine now and again!

So, to summarize all of the above waffle…

The Sookie Stackhouse Novels – for gritty, flawed and riveting characters.

How did you go and develop your own vampire lore, (which I think has some very unique features beside the classic ones)?

I wanted to ensure that all my supernaturals were as original – and as different – as possible. For me, that stemmed from asking various questions: Where did they come from in the first place? When, and how, did they come to be here? And then the two most important questions (you might notice a theme here!): ‘the what’ and ‘the who’ are they? The final questions, which needed answering, were of course: What motivates them all? What do they want?

In answering all of the above, and borrowing a little here and there from my own belief system, I was able to create new worlds and beings, but utilize existing belief or myth on which to base them. For example, the two worlds the beings emerged from were based on the concept of Heaven and Hell. I then spun that into something else entirely.

I took the myths about vampires and angels etc. and tried to demonstrate how, through storytelling and game of telephone, the idea of what they are has become quite different from the truth – the truth of course being the reality of things in my books!

I think, with all things, it’s ultimately an evolution of story telling. Meyer’s Twilight was an evolution from Stoker’s Dracula. Meyer took the notion of vampires – creatures that are known for being dark and demon-like – and made them attractive and gave them a moral fiber. The vampires in Styclar are, yet again, another evolution of the beings we have come to know as vampires. They exist in a different way, and they play by a different set of rules.

Lailah is quite a mystery. Did you know exactly when you created her what she was, or was it something that developed while you were writing?

When I first brought Lailah to the page, I had spent some time asking myself what she was, and then I ended up realizing that the far more important question was who she was. I therefore knew her history, and her beginnings, on the ‘what she was’ front from the outset, but the real journey for me was discovering who she was and that only came with writing her.

Lailah also doesn’t have much of an idea of who she really is, but it’s obvious that she has already lived a few lives (so to speak. We can’t reveal more; otherwise we would spoil it too much!). Nikki, if you had the chance to live another life during another time, who/where/when would you like to choose? It can be a famous historical figure, or just a time period 🙂  (I would love to be Katherine Swynford, Duchess of Lancaster, as I have a big fascination with English history)

Great question! If we were talking factually, then Amelia Earhart – she was an aviation pioneer and an author! And though the end of her story was a tragic one, I really want to know what happened! So much so that I would like to be her on the day she disappeared simply to find out! Now, if you were talking fictionally… Doctor Who. So I could fly around in my Tardis and experience all that time and space has to offer!

Let’s talk a little about the boys we are going to meet. Nikki: Team Gabriel or Team Jonah?

Ha! Nice try, Danny!! I am Team Fence! For two reasons; the first because I genuinely love both ‘guys’ equally, but for very different reasons; the second because, if I did sway more to one Team and I revealed it, readers would likely assume that’s whom Lailah would end up with!

If Gabriel would have to describe Jonah in a tweet, what would he say?

And now, if Jonah would have to describe Gabriel in a tweet?

I am going to quote Crystal from @Crystalbookland here who I think said it best, and Jonah would probably agree:

As I have the stage… 😉 I’d love to say a massive thank you to every blogger and every reader who is getting behind the Saga and showing so much love already, before the book is even in stores!! You guys are quite simply awesome; I’m sending many hugs down my wi-fi right now!!

Thank you so much for stopping by today Nikki!

Thank you for having me! xox

“I was born and raised only minutes away from the chocolately scent of Cadbury World in Birmingham, England. So it will probably come as no surprise that when I’m not dreaming in Vampires & Angels, I dream in chocolate! For the past ten years I have lived in West London with my hubby and two dogs, Alfie – the Pug & Goose – the Chihuahua.LAILAH is my debut novel, and first launched in serial form to wattpad, a readers & writers community. Within just 6months, LAILAH had over a million reads and thousands of comments and votes.Since then, The Styclar Saga has gone on to pick up a traditional deal with Feiwel & Friends, and LAILAH, the first book in the series is due for release on October 7th 2014.These days I spend my time balancing my amazing job of writing fantasy fiction, with my other, very important role of Chocolate Connoisseur. I like to multitask and do the two together. It makes me happy.” The girl knows she’s different. She doesn’t age. She has no family. She has visions of a past life, but no clear clues as to what she is, or where she comes from. But there is a face in her dreams – a light that breaks through the darkness. She knows his name is Gabriel.On her way home from work, the girl encounters an injured stranger whose name is Jonah. Soon, she will understand that Jonah belongs to a generation of Vampires that serve even darker forces. Jonah and the few like him, are fighting with help from an unlikely ally – a rogue Angel, named Gabriel.In the crossfire between good and evil, love and hate, and life and death, the girl learns her name: Lailah. But when the lines between black and white begin to blur, where in the spectrum will she find her place? And with whom?Gabriel and Jonah both want to protect her. But Lailah will have to fight her own battle to find out who she truly is

Visit the other Tour Stops for more exciting content and Giveaways!

Win a ARC of LAILAH! (sponsored from Macmillan)

US/CAN only – Entries via the Rafflecopter below

The Lies About Truth by Courtney C. Stevens
In My Mailbox – Danny’s Edition 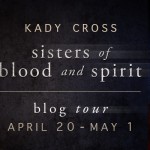 « A Fresh New Voice – The Young World by Chris Weitz
Sunday with the Bookworms {9} … with Exile, Wondrous Strange and Vacation! »

29 Responses to “Chat with the awesome Nikki Kelly, Author of Lailah by Nikki Kelly & giveaway”