(only 3.99 for the eBook!)
Synopsis from goodreads
Rating

The Hematoi descend from the unions of gods and mortals, and the children of two Hematoi-pure-bloods have godlike powers. Children of Hematoi and mortals-well, not so much. Half-bloods only have two options: become trained Sentinels who hunt and kill daimons or become servants in the homes of the pures. Seventeen-year-old Alexandria would rather risk her life fighting than waste it scrubbing toilets, but she may end up slumming it anyway. There are several rules that students at the Covenant must follow. Alex has problems with them all, but especially rule #1:Relationships between pures and halfs are forbidden. Unfortunately, she’s crushing hard on the totally hot pure-blood Aiden. But falling for Aiden isn’t her biggest problem–staying alive long enough to graduate the Covenant and become a Sentinel is. If she fails in her duty, she faces a future worse than death or slavery: being turned into a daimon, and being hunted by Aiden. And that would kind of suck.

I admit this one took me by surprise only to leave me wishing I had read it earlier, or later so that I didn’t have to wait for the next one. I heard lots of things about Half-Blood and many girls were falling head over heels for Alex but still I didn’t pick it up. So, when I was in holidays and had actually time to read I simply gave it a shot.
And..
Oh my Freaking Goodness!!

Think Vampire Academy just in Greek and not in Russian… and no Vampires..

I read a lot of reviews saying that this one feels too close to Vampire Academy. I disagree. Yes, it does has the school elements, plus the forbidden love between teacher and student, but other than this Half-Blood is its own story and deserves to be treated as such. Mrs. Armetrout deals with Greek gods and creates a race of half-gods with super human powers. However, there are the ones that are much purer in terms of godlike blood lines and both races shouldn’t mingle, too much. Alex is a half-blood but she has been on the run for quite some time with her mother took her. Now, she’s forced to go back – alone and scared. And she has to learn the truth about herself and the reason behind her mother’s sudden escape.

I LOVED Alex; I loved her voice I loved her strength! She was awesome! The story is told from her POV and I found myself snicker and laugh from time to time at her snarky thoughts and witty replies. But of course as strong as she seems there is still a girl behind all this strong talk and inside she’s vulnerable. I’m tempted to say that her stubbornness and strong belief in herself was sometimes a little too much, so much so that her stubbornness overrules common sense, but..

*sigh* You cannot NOT fall in love with Aidan; this man full of willpower and has a very keen sense on what is right or wrong. He’s kick ass and bad ass – of course he is – but at the same time appears to be much more rational and mature than Alex. Oh plus, Aidan is of course hot and a Pure. This means, that Alex and Aidan are definitely not allowed to be together – but this adds to the suspense factor of the story. The romance between them was lovely, strong, full of emotion and sometimes downright sexy! I loved it!

Secondary Characters? Yes! And they are awesome!

The one I loved most is Alex’s best friend – a boy who instantly takes her back even after she’s been so long away. He’s the best friend any of us can wish for and I loved him so much! But, what I loved most is that he was really just and only her best friend! No hidden and secret feelings! Thank You so much!!

The Plot? Yep, awesome too!

Besides the amazing characters, there is also a lot going on with the plot, which kept me on edge the whole time. It’s never boring and the story moves on very fast. Alex has to learn and discover some secrets that will shatter her world and leaves us gasping with her.

I abso-freaking adored this book! The writing was incredibly refreshing and the dialogues and characters were perfect – right to the point, intense and funny! The characters are all strong and detailed and I loved Alex and Aidan instantly. I did fall for this book, the story and  the characters hard and now, I can’t wait for the next book!

Additional Notes: There is a prequel out called Daimon which takes place before Alex comes back to school and which leads up to the happenings in Half-Blood. Also, the next book Pure comes out in April and I.Can’t.Freaking.Wait! 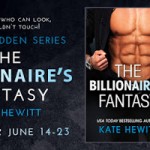 The Billionaire’s Fantasy by Kate Hewitt Blog Tour & Giveaway:
Homeroom Diaries by James Patterson, Introducing the Freakshow and a Giveaway