Last week, I asked you (yes you) to help me decide:
a. if I should buy an eReader
&
b. which eReader you thought I should buy.
The response was fan-freaking-tastic.
And only marred by a momentary kafuffle with the comments.
just.so.you.know.
I did read every comment.
I was just unable to responded to a few,
and I thank you all for taking the time to not only
vote on the survey but give such awesome feed back.
This very post was in fact born out of your amazing, insightful responses. 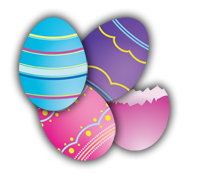 The purpose of this post is as follows:
1. To discuss the outcome of the survey.
2. To give a little advice to those of you who are on the fence
about buying an eReader due to finances, lack of interest, and/or
just flat out confusion over what exactly you should buy.
3. To give my opinion on why some prefer the Kindle and others the Nook.
4. To unveil what I bought.
5. A word to those who would aim for book pureness.

If you want to check out the post and the comments left click here.
For now… Let’s begin. 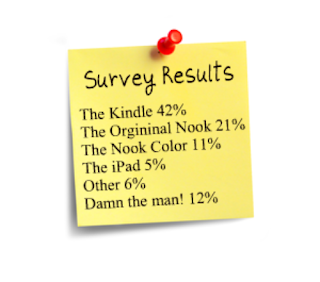 *67 people voted in this survey.

The Kindle held a strong majority of the votes (42%) with the Barnes & Noble’s Nooks coming in second with a combined total of 32% of the vote. The iPad was beat out by both the “other” and “damn the man” options. Making the iPad by far the least favorite eReader device. The comments left on the post clearly supported this data with many people stating that the back-lighting and heaviness of the iPad make it an extremely uncomfortable reading device. Comments left about the Nook Color were extremely favorable and seemed to take away some votes from the Original Nook. However, complaints over the lack of the E-Ink on the Nook Color, plus the fact that it has so many bells and whistles (something you’d think would be an advantage) prove to much of a distraction for the “serious” reader. Thus, the general consensus seems to be that while the Nook Color is a seemingly awesome idea in theory, practically it’s not what a reader is looking for. And what of these “others.” Well, many a commenters expressed their undying love for their Kobo Readers stating that the cost of the reader (which is less than the Nooks and Kindle) and it’s streamlined programing was for the win. Other readers that were mentioned were Sony’s eReaders. However, no one gave specifics as to why they liked Sony’s devices in comparison with others. Having looked at them myself, I’d say extra bells and whistles, plus Sony’s technology is what makes them a more tech savvy product. However, they are extremely costly. And what about that solid 12% who thought I should say “HELL NO, eReaders you can all suck it?” More on that later.

Reading Between the Lines:
Alrighty cutie, that survey was all fine and dandy but what exactly does it mean? I’m still confused.

Me too. But I think I’ve got a little better grasp on this whole eReader debate. Here’s how I see it: 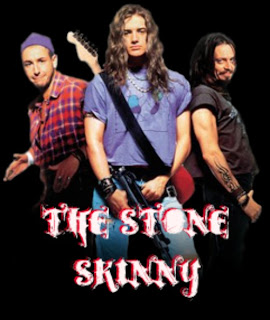 First and foremost, you have got to decide financially and practically what makes sense for your life. How will an eReader fit into your world? Does it even make sense to buy one?

Let’s be honest, everyone says you have to buy a house, because if you don’t and you are just renting you are essential throwing away your money. Well, that’s all fine and dandy for those of us with the means to keep up on the upkeep of our abodes (let alone make enough money to afford one), but not everyone can take on the responsibilities of owning a home. Not to mention, maybe it just doesn’t fit our life style. Maybe we just don’t give a crap if we are throwing away our money, because we can call our landlord any time something breaks!

What does this have to do with an eReader? eReaders are not cheap. When one is buying an eReader they are making an investment, if you will. And, to be honest, unless you are buying only older eBooks and/or classics eBooks or only downloading the free eBooks, you are not saving that much money (at least is seems that way). With my Barnes & Noble account I get paper books anywhere from 30 to 50% off the cover price, plus free shipping, which is completely comparable to the price of eBooks, if not cheaper. Plus, B&N’s bargain paper book selection is huge and greatly priced. Amazon offers the same deals, not to mention, Target, Walmart, Costco, and others who offer physical books at any where from 20 to 50% off the cover price. Sometimes even more. And let’s talk physical used books, which can be found online for as little as a penny! Not to mention, my good friend, the library which beats them all with an extensive collection and is free. That’s right FREE! You just can’t beat that price.

And if you are like me and on a budget, forking out the money for an eReader is all fine and dandy, but you’d have to stop there, because you can’t afford then to fill it with all the newly released eBooks you’ve been dying to read, due to having broke the bank just to buy the darn thing.

Granted the upside to an eReader is hands down the storage space. If you are like me, and you don’t have a room dedicated to shelves filled with books (*daydreams about the awesomeness*) then you too are running out of room for your little hobby reading. eReaders are a great answer to this dilemma. But what if you don’t mind the stacks of books?

But the biggest selling point of an eReader: instant gratification. With an eReader in your hand you are a simple click away from a book. No waiting in line. Heck, you don’t even have to leave your house! The books comes to you. Pining is a thing of the past, my friends. In the future, we snap our fingers and get what we want now. Patients, it’s a lost art.

When looking into buying an eReader, I believe it is best to write a pro’s and con’s list. Making sure that it doesn’t just end up being an expensive paper weight. 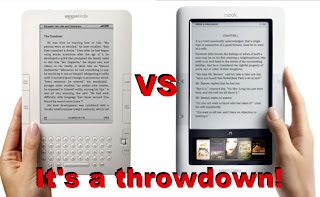 To Kindle or to Nook that is the question. While there are other eReaders out there (like the Kobo) that are doing a bang up job, the two eReaders that are most popular are the Kindle and the Nook. Each camp will go on and on about the benefits of their favorite eReader and why the other eReader sucks. They also compare Amazon and B&N fervently defending the honor of their favorite books providers. I will admit, I am a fan of B&N. But a lot of that has to do with I love to slip away, walk into that hallowed place, take in the fresh scent of coffee and new books, and forget for a while that I’m a mother of four. It’s like my own personal adult wonderland, where everything is all shiny and new. I enjoy being there. It makes me happy. Maybe if Amazon had a psychical bookstore I could roam around I’d like it more. Who knows?

So, when comparing the two companies, I must admit I can’t see much of a difference. Each has a special membership, which you can pay for and receive special discounts and free 2 day shipping. Each has competitive pricing on their books with the deference in pricing coming down to pennies at times.

And what of their eReaders? I was surprised to hear from people in the comments who had both that they loved each eReader and didn’t see much of a difference between the two. What it seems to come down to is the readers preference. Do you like Amazon or do you like B&N? It’s as simple as that.

Yes there are some fundamental differences. The Nook does lag slightly more than the Kindle and needs a memory card to hold as many books as the Kindle. However, the Kindle forces you to only buy books from Amazon and does not have a library renting option. Not to mention, once you’ve hit that storage limit (which would frankly be pretty darn impressive) you cannot add a memory card to store more.

To me, these differences add up to a wash, and one must simply ask them self, what will make me the happiest to read from?

You’d think I would have held out longer. For goodness sake, I don’t even own a cellphone because they annoy the hell out of me (but that is another day another rant). After some careful thought and an extensive pro’s and con’s list I did end up getting an eReader, mainly so that I could finally start reading the eBooks publishers/authors have been sending us here at Bewitched Bookworms!

After reading all your comments, I realized what was important to me was being able to rent books from the library on my eReader. If you check out my last In My Mailbox you will see I rent a looooot of books. And so I went with: 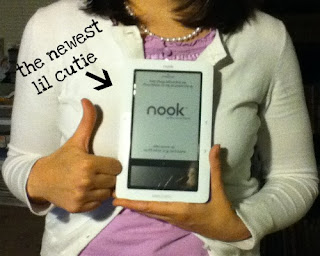 Isn’t she a beaut?! The mister took me out and bought her for me. I’m thinkin’ ’bout namin’ her Pearl. But I’m open for suggestions.

In conclusion, the decision to buy an eReader wasn’t easy and my reasons for doing so greatly relied on the fact that I blog here on Bewitched and was missing out on a lot of opportunities due to not having one. Would I have bought one if I wasn’t apart of the Bewitched Sisterhood? Hm… that’s a great question, and one I think I’ll leave open. But I have this to say to all you out there who are on the fence or think eReaders will be the end of “real” books as we know them. I agree that as technology has grown our world has become colder, less personal, and all about streamlining. And while I see the benefits to owning an eReader, there is a part of me that is slightly ashamed of myself for giving in. My advice to you is to do what is best for your life style and not feel bulldozed by the masses, but to also be open to change whilst doing so. Cause I have to admit, my lil Nook is wonderment for sure.

If you’re still with me after all that
make sure to check out the comments on the original post
for more information on these readers, advice, commentary,
and sites were you can find refirb or used eReaders for cheaper.
Truly, the comments were amazing!
Thanks again to everyone for all there help!

What are you thoughts on eReaders?
Are you a fan?
But most importantly:
Does my new lil Nook look like a Pearl
or would another name be more suitable?!
Join the discussion or add to what you’ve already shared.

Tis what I know,
and what I’ve got.
Until next time–
Yours truly,

28 Responses to “the great eReader debate”