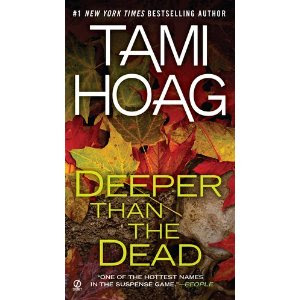 California, 1985. Four children and young teacher Anne Navarre make a gruesome discovery: a partially buried female body, her eyes and mouth glued shut. A serial killer is at large, and the very bonds that hold their idyllic town together are about to be tested to the breaking point.
Tasked with finding the killer, FBI investigator Vince Leone employs a new and controversial FBI technique called “profiling,” which plunges him into the lives of the four children — and the young teacher, whose need to uncover the truth is as intense as his own.
But as new victims are found and pressure from the media grows, Vince and Anne find themselves circling the same small group of local suspects, unsure whether those who suffer most are the victims themselves…or those close to the killer, blissfully unaware that someone very near to them is a murderous psychopath.

This is my first book by Tami Hoag and I am so glad I had the chance to read this book. TLC Book Tours approached us Bookworms to host a stop on the author’s upcoming blog tour for her new book Secrets to the Grave(Goodreads, Amazon), the sequel to Deeper than the Dead. Everytime a thriller or a book heavy on forensics shows up on the Bookworms’ virtual doorstep, I’m the one jumping out to grab it and make it mine.

The book is set in a serene California town in 1985. Four fifth graders stumble upon a murdered woman and the story follows the various characters throughout the investigation in a very tight third person narrative. I haven’t read anything set in the mid-eighties before and the author throws in subtle clues drawing you back into a simpler time, with fashion, pop culture, and lack of technology references that aren’t distracting to the story.

This book is not heavy on the forensics, like Patricia Cornwell’s Scarpetta series books are. It’s good old fashioned police work that gets this case solved (as good as it can get solved at least). The main thing I really loved about this book is that I couldn’t guess who the monster was from the beginning. Tami Hoag does a great job of weaving in and out between three different suspects for hammering home the real perpetrator. It’s not until the last fifty pages of the book that the picture becomes clear.

There is a larger cast of characters in this novel. The third person point of view lets you really get inside each of their heads, even the serial killer’s mind. Each character has a distinct voice and the author seemlessly transitions between which character is being focused on. A romantic subplot between FBI profiler Vince and fifth grade teacher Anne was a nice addition to the sometime gruesome and always tense police investigation.

What I loved: The tight narrative and fast pace of the book really drew me in from the start. You really care for the various characters, especially the children involved. The author makes a point of showing that a child can turn out very differently depending on the environment and parents they are raised with. I really liked not being able to guess who the murderer was until it was revealed in the end. The subtle clues the author threw in for the three main suspects led you to believe it could be any one of the men.

What I didn’t love as much: The book wasn’t heavy on the forensics of the time. But in the early to middle eighties, DNA wasn’t trusted and as highly developed as it would be in the nineties, so I didn’t expect that to play a part in this story. There was a subplot involving the junk yard owner and what was found in his pig pen that wasn’t wrapped up. Who dumped all of those items in the pen? The serial murderer or the junk yard owner? The book just left the junk yard guy sitting in jail and didn’t wrap up that story line.

Overall, I give this book a five. This book is an example of what a crime thriller is at it’s best: character driven, full of misdirection and red herrings so the end reveal is not anticipated, police investigation heavy, with a little forensics thrown in. I can’t wait to tear into the sequel (which I am doing right after I hit “publish post”).

Please join us here next Thursday, December 16, 2010, as author Tami Hoag stops by on her blog tour for the release of Secrets to the Grave.

A copy of this book was provided by TLC Book Tours. My review was in no way affected by the complimentary nature of the book. Secrets to the Grave Contest and Review