hy72ir6n49g5z831meqb One Grave at a Time by Jeaniene Frost - Bewitched Bookworms 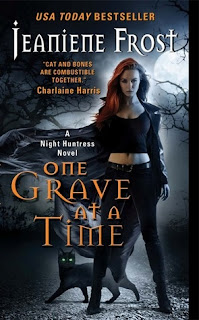 One Grave at a Time
(Goodreads, Amazon, Barnes and Noble)

My Thoughts:
I’m a big fan of Jeaniene Frost’s Night Huntress series, and I preordered the sixth installment One Grave at a Time as soon as it went live on Amazon. In this installment, Cat and Bones are more settled into their married life. While a relatively drama-free Cat and Bones isn’t as exciting to read, I did enjoy seeing how their relationship has deepened and expanded as time goes on. The romance between the married couple did take a backseat in this novel, which was a bit disappointing. And I would definitely classify this one as more of an urban fantasy than a paranormal romance than the previous books in this series.

The big evil in this book is Heinrich Kramer, a centuries old German ghost that was responsible for hundreds of murders of supposed “witches” when he was alive. Now he returns every Halloween to torture and burn three women. Cat is up against one of the toughest foes she has ever faced. How do you fight someone who isn’t corpeal 364 days of the year? And Cat certainly takes a beating in this book.

Another thorn in Cat and Bones’ side is Jason Madigan, the newly named head of the secret Homeland Security section that Cat’s Uncle Don vacated at the end of the last book. Madigan definitely makes his irritating presence known throughout the book, and he shoves his authority in their faces every chance he gets. Since Don is in a unique situation to hang around undetected and spy on Madigan, he takes the opportunity to do so and reports back to Cat.

All of the side characters I expect to see were present in the book, with the exception of Mencheres and Vlad. With the relationship between Cat and Bones being so strong, the focus definitely leans more towards a group effort in terms of focus. You see Ian, Spade, Denise, Fabian, Justine, Tate, and Don throughout the book. A new character, Tyler, who is a psychic medium is introduced and is an enjoyable character.

Overall, I give this effort a four out of five. The book is a fast paced, page turner, and is a better outing than the last book in the series. The book lacked a little sizzle between Cat and Bones, but it more than made up for that in action and adventure. The ending wraps up enough of the loose ends to keep you satisfied, but there are a lot of things left hanging for the next installment.

2 Responses to “One Grave at a Time by Jeaniene Frost”