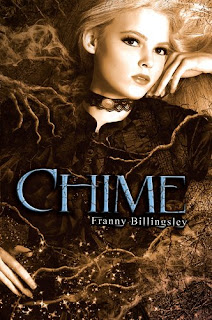 Before Briony’s stepmother died, she made sure Briony blamed herself for all the family’s hardships. Now Briony has worn her guilt for so long it’s become a second skin. She often escapes to the swamp, where she tells stories to the Old Ones, the spirits who haunt the marshes. But only witches can see the Old Ones, and in her village, witches are sentenced to death. Briony lives in fear her secret will be found out, even as she believes she deserves the worst kind of punishment.

Then Eldric comes along with his golden lion eyes and mane of tawny hair. He’s as natural as the sun, and treats her as if she’s extraordinary. And everything starts to change. As many secrets as Briony has been holding, there are secrets even she doesn’t know.

Normally, after I’ve read a book, I sit down and write the review in a passionate rush. Whether I loved a book or frankly hated it, my fingers just itch like crazy to get all my feelings out at once. After reading Chime, I had a completely different experience. My mind just needed time to process. To allow the story to wash over me. Much like coffee, my brain needed a lil time to percolate. And while I still am not sure I am ready, I figure I better give it a go. Melodrama ftw. Let’s do this thing!

a description: There once was a girl named Briony who lived in the Swampsea where the Old Ones lived. And she could see them and they could see her. And she kept this a secret. She kept a lot of secrets; secrets about how her step-mother died; secrets about how her twin sister Rose became ill; witchy secrets that if told might kill her; secrets that were buried deep within her soul. There once was a girl named Briony, the wolf-girl, who met a boy with a lion’s smile who would make her feel again and maybe bring those secrets out.

a gushing review: First and foremost, Chime is a beautifully written novel. Each word picked for not only its meaning, but its sound. Each phrase carefully crafted to grab our attention, keep us hooked, move us, delight us. I’m failing here to describe the simple beauty of this novel, and I’m not sure one can completely understand unless they’ve read it. What struck me about this novel was the attention to detail. Ms. Billingsley makes each word count, creating a magic through her carefully crafted story that only a true wordsmith can accomplish.

This attention to detail; this dedication to a well told story gives this novel an amazing setting. Think Tim Burton’s Legend of Sleepy Hollow with its almost otherworldly feel and magical yet sinister setting. Ms. Billingsley invites us to enter a world where the Boogy Man is real and witches run wild.

Into this setting, each character is placed lovingly. Their pain, joy, and sorrow felt. Told in the first person, Briony shares with us her life, her misgivings, her hopes, her dreams, her heart, her sorrow. At first, one could view Briony as an emo whiner, yet as the story progresses and we weigh her actions against her inner turmoil, we find that she is a heroic protagonist who is trying to take care of those she loves, including herself. Eldric complements Briony completely and grows through the story, going from a carefree bad boy with a lion’s grin to a loving, protector willing to do anything to help those whom he adores.

And what of the plot? What of the story telling? It is seamless in my humble opinion, twisting and turning from point A to point Z in a satisfying way, the conflicts which arise are organic and the characters dealing with them in realistic ways. The mystery of this story churns just under the surface, presenting itself over time, and alerting the reader to the reality that all is not as it seems, and that our protagonist might not know fiction from non-fiction any more. While I was able to guess at a few of the “big reveals” it took me more than half the novel to even begin to understand what was going on, and even then I couldn’t grasp it all. Yet, it wasn’t a frustrated confusion, more of an enlightenment over time.

The ending of the novel left me wanting more and I am DYING to get my hands on the next book (*crosses fingers for a sequel*)!

To be honest, I am in love with this novel. I have nothing negative to share. It was the perfect book at the perfect time. One of those reads you find to be an absolute joy and are sad to put down. I highly recommend this novel.

Tis what I know and what I’ve got!
Thank you again to Penguin Young Readers Group
for sending us a copy of this novel.
It was a joy to read.
Until next time–
Yours truly,

« Desires of the Dead by Kimberly Derting
The Lipstick Laws by Amy Holder, Review »