Brian MacGregor busted his ass to make detective by age thirty. He doesn’t have time for a social life, not even for the pretty ER doc who sewed him up post run-in with a knife-wielding perp. He never expected that when he went looking for the witness to a gangland murder, the doc would be his best lead to his missing witness. Now if he can only keep his hands off her.

Priya shoved the metal door open dashed outside. While she’d been inside, the sun had set. The rear of the building was cloaked in shadows. A lone light illuminated the area around the door. She hurried past the dumpsters and turned the corner of the building, only to run smack into a hard, male chest.

She gave a little screech and jumped back. He was an indistinct shape looming in the dark.

“Not so fast, doc,” Brian said. Priya breathed an involuntary sigh of relief that she wasn’t about to be raped and murdered behind a strip club before attempting to dart around him.

But Brian moved with her, managing to corner her so her back landed against the side of the building. He leaned into her personal space and anchored an arm against the building right next to her face. “What the fuck were you doing back there?” His voice held a low, dangerous edge.

Shivers raced down her spine. She told herself they were from fear, but she was a liar.

She attempted to dodge him, but he brought the other arm up to form a cage around her. Trapping her. “Let me go.” Her heart was pounding furiously now.

He leaned into her, not touching her. Not yet. “Why did you come here? You almost got me killed. You owe me.”

“I don’t owe you anything.” Her voice came out annoyingly breathless. But his body was all around her, surrounding her with his heat.

She shimmied against the wall to duck under his arms. But he was ready for that. He closed the inches between them so that the pressure of his body held her immobile.

Despite the summer heat, her nipples hardened to points where they smashed up against his chest.

He dropped his head. Their mouths were only inches away. He drew a ragged breath. “This is so fucking wrong,” he said, just before he kissed her. 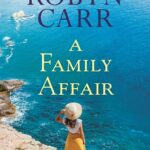 A Family Affair by Robyn Carr