About Tough Justice Countdown (Part 1 of 8)

FBI Special Agent Lara Grant had thought that she’d put her past behind her—finally—with her last case. But now a serial bomber is targeting Manhattan’s elite power players, offering them a choice between saving hundreds of lives or seeing their darkest secrets exposed. Lara is working with the Crisis Management Unit to stop the bomber, but how will she react when she’s the one who has to choose between truth…or death?

For more information on the Tough Justice series, visit toughjusticeseries.com.

I really loved the serial format of the Tough Justice series by authors Carla Cassidy, Tyler Anne Snell, Emmy Curtis and Janie Crouch that Harlequin published last year. Each installment blended from each one pretty seamlessly, even though each author wrote two installments in the eight part serial featuring FBI agent Lara Grant. And these four fabulous authors are back again with another set of eight in the latest part of Lara Grant’s story, Tough Justice Countdown.

In the first part of Tough Justice Countdown, written by Carla Cassidy, a serial bomber is taking down seemingly random spots around Manhattan, and Lara and the other agents in her Crisis Management Unit within the FBI must work with Homeland Security to find who’s responsible before anyone else is killed. While Lara is still suffering from the demons left by her last big case and the scar that was her mother’s murder when Lara was a little girl, she’s a hard-working, determined agent who’ll toe the line and bring the bad guy to justice. But her partner Nick is much more straight and narrow and they’re walking on eggshells around each other after their fling has gone bad, so working together isn’t as easy as it should be. Luckily, their other agents are up to the challenge of flushing out the bombers and will leave no stone unturned–even if they dig up dirt that would have been better left undisturbed.

I really loved Lara as a character. Even though she has a sadness around her, she can still do her job and leave her personal problems at home for the most part. She’s not completely fearless at her job, so she is very human and very likable. Nick is still very much interested in Lara and wants back in her personal life, but he’s not sure how to break through to her. He sees that she’s very fragile on the inside, and he doesn’t want to push. The rest of the side characters that you’re introduced to in part 1 are fleshed out and realistic. Even the one-and-done witnesses/victims aren’t one note–they are vivid, developed people.

I give Tough Justice Countdown Part 1 an 4.5 out of 5. I love how you can read each installment in this serial in a few hours, and still get a well-rounded story that is fleshed out and enjoyable. The sights and sounds of Manhattan come to life, and the crime scenes are vivid as well. Lara, Nick, and the other agents are hot on the trail of the bomber, and at the end of part 1 they have someone who has confessed, but he has a very personal connection to one of their own. Can they trust that this is a real lead or a setup? I can’t wait to dive into part 2 and the rest of the serial since all 8 parts are available now on Amazon, Barnes & Noble, and iBooks. Carla Cassidy lives in the Midwest with her husband, Frank .  Although she always loved to write, initially her dream was to be a dancer and actress.

She was a cheerleader for the Kansas City Chiefs football team and worked in local theater productions before packing her bags and leaving for New York City.
There she got a job as a singer/dancer in a band that traveled the east coast.  It was during those travels that she met her hero and married him.

In 2004 she sold her first romantic suspense novel to New American Library.

She now writes for Silhouette, Harlequin and NAL Signet.

Enter to win a digital copy of Tough Justice Countdown Part 1 by entering the Rafflecopter widget below. 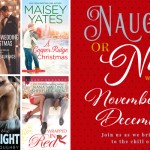