I haven’t read Megan Shepherds precious series even though so many people have loved it so much. But, when I saw The Cage I knew I needed to read this one and .. damn this book did so not disappoint!

Eerie and Creepy Setting that is quite terrifying….

Go into a zoo and then imagine the roles being switched and it’s YOU behind those walls, confined in a cage and observed at any moment. Imagine, they would test you see how intelligent and smart you are (you, member of the mightiest of all races, a human sapiens no less) and then tell me that this is not incredible upsetting and terrifying! And this is exactly the scenario Cora finds herself in. One moment all is fine and she’s home, next moments she finds herself in a strange land with some more strangers, only to find out it’s a big elaborate and sophisticated cage they are all in..

Some intriguing, interesting characters that will completely surprise you!

Apart from Cora that are some other kids stuck with her and it’s absolutely amazing to see these kids develop and change. We have typical stereotypes like the bad boy, the super smart nerd, the girly girl, and some more  and they all have been selected for different reasons. While the kids are being tested, they change and it’s also a little scary to see how these circumstances can change people. Seemingly nice kids turn awful, and these developments are eerily fascinating to see! Promise, these kids will surprise you so much, you won’t even see it coming!

A wonderful, slow burning romance (that still needs some more fire..) that also will completely surprise you!

Talking about surprises – the romance was another well placed plot that (while not completely surprising) still managed to take an astonishing turn. And oh well, I just realized I can’t talk much more about this now if I don’t want to spoil this part for you…

Meghan Sheperd created a bizarre race that is behind kidnapping the kids and putting them into a cage. They are supposedly much more evolved than our race and lost all kinds of emotions along the way, or … so they would like to be seen. Inside of them, they do have emotions and feelings but would never let anyone see it. But of course, it would be boring if there wouldn’t be THE one alien that does not want to hide his emotions and sees the misgivings of his race more clearly.

I will have Meghan Sheperd here on the Blog later this month with a fantastical guest post that you shouldn’t miss! 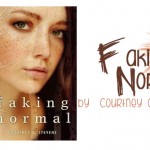 4 Responses to “Unique, Scary and Awesome! The Cage by Megan Shepherd”