Halloween is one of my favorite holidays, but I love to watch horror movies and read books that feature all sorts of supernatural creatures and horror/suspenseful situations year round. To celebrate the upcoming night of dressing up in costumes and collecting candy (this year with two little Marios and one little Luigi), today I’m sharing my favorite supernatural creatures and the books that feature them.

Warm Bodies is hands down my favorite book featuring zombies. Isaac Marion took a genre that has been done to death (pun intended) and made it fresh again by giving us a zombie main character that can actually think, feel, and yes, even fall in love. The zombies in Warm Bodies are a bit different, and they can even evolve over the course of the book. The prequel novella, The New Hunger, covers the beginning of the zombie apocalypse and R’s humble beginnings as a zombie. These are excellent books, and I can’t wait for the sequel to come out next year.

I’m not really a big fan of nice fairies. I don’t know why I haven’t read that many books featuring them, but the Wicked Lovely series by Melissa Marr set the bar high enough that I haven’t picked up many book with fairies as characters since (except for JL Bryan’s Songs of Magic series). I remember this world being gritty, dangerous, and fascinating. The fae themselves were definitely a departure from the happy go lucky ones Disney would have you think of…

The Charley Davidson series is my favorite series adult urban fantasy. Who knew a grim reaper could be so witty, tenacious, smart-mouthed, and determined while tracking down the bad guys as a private investigator? Did I mention that the son of the devil is in love with her and she just can’t stay away from him either? This is my go to set of books that I recommend to people when they’re looking for something new to read. There’s also ghosts and spirits galore in these books, so it could have been included in the next category.

Why, oh why did Kendare Blake only write two books featuring Cas Lowood killing dangerous ghosts? Anna was certainly one of the fiercest adversaries that Cas ever faced, but he certainly met his match in the second book, Girl of Nightmares, when fighting the spirit that killed his father. Seriously creepy and deadly specters, strong protagonists. How I miss these books…

Who wouldn’t want to be able to reincarnate over and over again, especially when you get to chose where you go? JL Bryan’s Paranormals series has a girl who can kill with just one touch, a boy who can heal in the same way, a girl who can make everyone love her with just a word, and a boy who can make everyone fear him with just a look. There’s even a girl who can speak with the dead and a boy who can reanimate the dead. But these opposite pairs are in an endless cycle of trying to destroy each other, and when two of them dare break that pattern, all hell breaks loose. And the collateral damage is immense and highly enjoyable to read.

Who wouldn’t want to live forever and never age again. Sure, you have to drink a little blood here and there, but that’s a small price to pay. The world of vampires is so varied, full, and rich in literature that there’s something for everyone. My favorites happen to be Jeaniene Frost’s Night Prince books featuring Vlad and JR Ward’s Black Dagger Brotherhood series.

So these were my Super Six Favorite Supernatural Creatures in Books. I can’t wait to see yours!

Up next week is Pushy’s Super Six Books She Can’t Wait To Read With Her Kids. 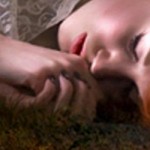