#1 New York Times bestselling author Karen Marie Moning picks up where Shadowfever leaves off with Iced, the first book in her hotly anticipated new urban paranormal trilogy set in the world of the blockbuster Fever series.

Dodging bullets, fangs, and fists, Dani must strike treacherous bargains and make desperate alliances to save her beloved Dublin—before everything and everyone in it gets iced.

Alright, some of you might or might not know that I am a huge, crazy super fangirl of Karen Marie Moning! She’s a genius – truly a genius and I read her Fever series more time that I have ever reread any series before! Even more than I read Twilight…. I was devastated when I finished Shadowfever nearly 2 years ago – the last book in the Fever series. But then my bookish light brightened when she announced more books! More Epic Awesome!

She announced 3 books told from Dani’s POV (an important character in the Fever Series) and … after this, 2 more book from Mac’s POV (epic, kick ass main character of the Fever series).

And last week it was finally time! Release of the first Dani O’Malley Novel! Woot!!!!

Yep, I was scared picking up this book. Dani was a character, that although pretty unique, went on my nerves on more than one occasions  in the Fever series. In addition, she was only 14 when the last Fever book Shadowfever ended and… really? Reading a story from Karen Marie Moning – the Queen of creating the most sexy man alive (Barrons), who’s books are always full of sexual innuendo and where the word fuck is just like any other word? Could she really pull of writing about a 14 year old girl and make me feel all the things I usually feel when reading her book?

I should have trusted Karen Marie Moning more! She’s a genius!

Because, she managed all this! She created an epic tale of awesome and went a fine line with her 14-year-old protagonist!

Dani is one of the shee-seers Mac got to know in the Fever series. Even more, Mac and Dani became very close, like sister. Then at the end of Shadowfever something happens that pushed them apart! And even though Dani is 14 – she’s far from being a normal 14-year-old girl! She has one of the most unusual and powerful abilities ever seen among the shee-seers – she’s incredible powerful! Abused by her mother, stuck between loving and hating her mother – Dani was left alone when she was only 8, then used for killing! Yes, Dani was abused by nearly every grown-up in her life. It made her grow up much faster, made her see the world from totally different eyes. And it was incredible looking in her head!

Dani is one of the strongest, stubborn person I have ever encountered. Other’s would crumble from the burden, the loneliness and the lack of love, but Dani takes life wholeheartedly, fully trying to live the richest life she can make herself and, she smiles still doing it!

Apart from writing epic tales, KMM always managed to create characters that are beyond anything you normally encounter. They are flawed, brutal, full on alpha male and … they are jerks and can be total asshats! But, and there’s the genius again, she manages to make you care for them, root for them and connect to them! Who cares for perfection if you have flawed, deep layered characters full of secrets it’s on us to discover???

Ryodan is man like Barrons and just as compelling! He captured me just like I was captured by thie beast that was Barrons! Hot, Sexy, totally Alpha – Male who just takes what he wants! He has an interest in Dani and forces her to work for him!!

Christian McKeltar – sexy, but oh so angry! Something happened at the end of Shadowfever and Christian is now trying to deal with it! It was disturbing and freighting! He is obsessed with Dani and just waits for her to grow up, tries to be her protector…

Dancer – well, he’s an interesting character!! 18 year old super smart and Dani’s best friend. Right now, there is no romantic development between them for which I’m grateful! But he also has secrets and I am so excited to find out what!

As expected, ICED is full of mysteries to uncover and full of action! Told mainly from Dani’s POV but we also get Kat’s POV, who is the leader of the Shee-Seer and we also get Christian’s POV, which is utterly disturbing and tragic! The plot was amazing and in ICED we find ourselves in a world where half the population died and people have to fight for their lives. It’s an utterly, dark dystopian setting and Dani tries her best to make the world a better place. She’s never loosing her hope and smile!

ICED was phenomenal and fecking fantastic! It was sexy, dangerous and Karen Marie Moning managed to create a 14-year-old voice that is unlike anything I have ever read. It’s definitely not a young adult novel, even though Dani is so young. It’s every bit of hot, sexy, dark and dangerous as her previous novels and I am excited to be back in this world!!!

ICED is considered Book 6 in the Fever series and is set right after Shadowfever (Book 5) ends. It is strongly recommended you first read Books 1- 5 which are told from Mac’s POV before you get started with ICED. As I am a truly big and crazy fangirl, please read my Series Review and my open letter to Karen Marie Moning – which I crowned the smartes and crulest author ever!!

UNABRIDGED |by Karen Marie Moning | Narrated by Phil Gigante, Natalie Ross | LENGTH 14 hrs and 51 mins
If you are an audiobook fan, then you must listen to this audiobook! Natalie Ross and her husband Phil Gigante narrate this book just as they narrated Dreamfever and Shadowfever with all their epic and amazing voice ranges! Phil has the most sexy voice ever and narrates all male voices, which gives this book the utter perfection of dual narration and both manage to bring those characters to live like a single narrated never would manage!
Get your audiobook and start listening!
Much Love,

Notable Quotables
Discussed! by Danny – Books Into Movies, or better not?
Danny’s special Shadowfever Review, including Giveaway of Awesomeness! 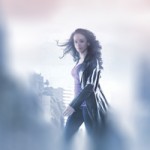 « Waiting on Wednesday – Rush by Eve Silver
Review: The Peculiar by Stefan Bachmann »