(You are so welcome to grab and use our Button,
just please cheesy link back to us 😉

This week it’s Pushy. *waves*
I’m not normally part of the IMM group,
but when I got the following package
delivered to my house this week,
I asked Heather if I could steal her slot
and share my bounty. 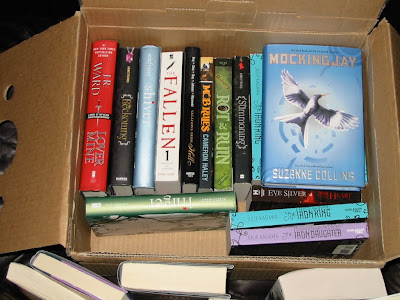 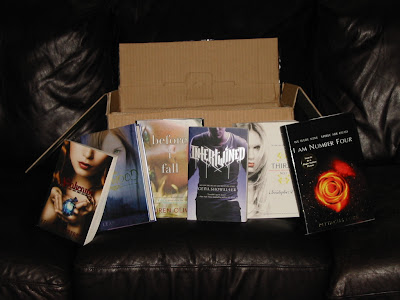 As you might recall,
Danny went to the Frankfurt Book Fair
and had an amazing time!!

Well, this lucky fox was the recipient of a majority of those books because
Danny has some plans up her sleeves for future give-aways!!!!!

UPDATE:
I apologize for not listing
the books I received from Danny out.
Bad, Pushy!!!

They are as follows:
I Am Number Four, Love Mine, Crave,
The Iron King, The Iron Daughter, Mob Rules,
Intertwined, Sins of the Heart,
Mistwood, Vacations from Hell,
The Fallen, Rot and Ruin, Thirst,
Mockingjay, Before I Fall,
Shiver, Linger,
The Summoning, The Awakening, The Reckoning

But that’s not all that came to my house this week!

I also was lucky enough, again through Danny’s beneficent office, to receive

All her life, Evalle has been straddling the line between human and demon. Curious about her origins, but content to live in the shadows, she finds that anonymity threatened by escalating conflicts between species. Accused of a savage murder, she’s forced center stage in what seems like the beginning of an Atlanta apocalypse. Before long though, her personal problems will submerge as she learns startling facts about a hoard of supernatural terrorists.

AND…..
How on earth could I have forgotten to include
the AMAZING package that arrived earlier??? 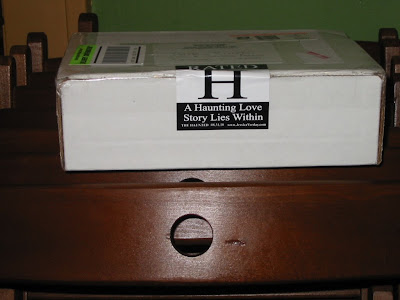 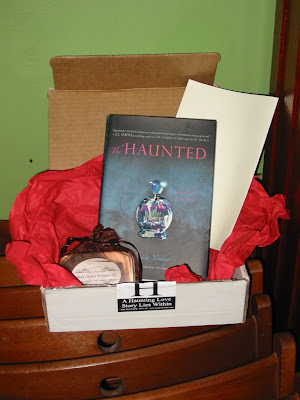 This was such perfect timing too because I had just picked up Jessica Verday’s first book in this series, The Hollow.

But Abbey can never get over Caspian, and Caspian has no choice but to return to her side, for Caspian is a Shade, and Abbey is his destiny. They are tied not only to each other, but also to the town of Sleepy Hollow, and to the famous legend that binds their fates—a legend whose dark truths they are only beginning to guess…

Needless to say, I’m SO set for my reading for a while.
That’s what was in my mailbox this week. What was in yours?

Sunday with the Bookworms {13} … with Illusions of Fate, The Hexed, and Bridgertons continued
In My Mailbox – Danny’s Edition