Chameleon is an unique Young Adult Paranromal series by Kelly Oram. After I read it I was excited to get the opportunity to ask author Kelly a few of my burning questions! Her honest and thorough answers made me super excited to pick up the next book!

But first let me show you the book we are talking about : For small-town rebel Dani Webber magic and monsters are no more real than the Easter Bunny… until the day she accidentally stops time. Dani quickly discovers that not only do supernaturals exist, but she herself is one of them. This is great news for her life-long best friend Russ, who can finally come clean about his own supernatural status and his undying love for her. Before the two can start to enjoy the long overdue relationship, Dani is taken by a powerful council of supernaturals who believe she is the Chosen One destined to save them from extinction.

As if being kidnapped and expected to save the world isn’t bad enough, an ancient prophecy warns of the Chosen One’s dark nature: “Only the truest love will keep her an agent for good.” The council believes they know who this “true love” is and, unfortunately, that person isn’t Russ. The mysterious, powerful and devastatingly handsome Seer is the last person Dani wants in her life, but when she starts having visions of a horrific future, she has no one else to turn to for help.

Soon Dani finds herself torn between two very different boys with two very different opinions of whom she can trust. With the visions getting worse and time running out, Dani is forced to put aside her feelings and work with both the Seer and Russ before an ancient evil is unleashed upon the earth.

Kelly, thank you so much for stopping by the Bewitched Bookworms today!  Chameleon is your latest book, would you tell us 5 Random Things about Chameleon? 🙂

Since it plays a big role in Chameleon can we talk a little of the Love Triangle? I admit, I was pulling my hair out while reading  about the two boys and Dani’s inner turmoil. Why did you decide to add a Love Triangle and what is your general view on them, especially considering that so many people are dreading them.. (We love our Teams right?)

It was bound to happen sometime, right? Chameleon is my fifth published work and my first real love triangle. (I mean there was a tiny bit of a Kyle/Isaac thing in V is for Virgin, but we all knew Kyle was really the only leading man of that story.)

As a reader I have a love/hate relationship with triangles. Sometimes they frustrate me to death and half of the time I end up on the wrong team, but they always pull me into a book and make me much more emotionally vested in the characters. Plus, though I wasn’t a cheerleader in school, I really do just enjoy pulling out my pompoms and shouting “GO TEAM!” until I’m blue in the face.

With Chameleon I knew before I had the plot fully developed that I was going to have a major triangle on my hands. It was just one of those things where I felt the situation called for it. I’ll admit I was kind of excited to give it a try. Though, I still think the majority of my books in the future will be triangle free.

Ok I admit, I loved Russ (Dani’s best friend) to pieces. He was an incredible character and definitely my favorite. Which character from Chameleon do you love most?

I’m right there with you on Team Russ. (GO TEAM RUSS! LOL) Russ Devereaux is by far my favorite character in the entire series. In fact, he might be my favorite character of any that I’ve written. (He’s tied with Ellie Westley from Serial Hottie.) I think Russ ended up stealing the spotlight from Dani in this book, which, in the long run, is okay because from a series standpoint Russ is sort of the key player. He even gets his own book! Book three is Russ’s story and is told from his perspective. I’m almost finished writing it now, and I have to say, I only love him more and more with each book. By the end of the series I really think all those “Team Russ” fans aren’t going to be disappointed.

Which character was the hardest to write?

Russ’s father, Alexander Devereaux, was tough to get right. He’s a very complicated character because he’s one of those guys who is not all good, but not all bad either. Finding a likable balance took work. I really love him though. You get to learn a lot more of his history later in the series which helps you get a better sense of what motivates him to do the things he does. I think he is a fascinating man.

There are some amazing twist and turns in Chameleon which made me gasp in surprise! Any small hints about what comes next for Dani?

Actually, we will get back Dani, but it won’t happen for a while. Book two of the series stars an entirely new cast of characters. Only a couple of people from book one are even in it. (And I’m not telling which ones!) In Chameleon we got to meet the council and learn how the supernatural world works, but we heard about a resistance who opposes them. Book two is called Ungifted and is the story of a human girl named Grace who gets tangled up with the resistance. It lets us meet the resistance and get to know their side of the story. Then in book three, the two sides finally collide and by book four all hell breaks loose. Literally! (Muah ha ha!) I’m really having a blast with this series if you can’t tell. I hope you guys love it too.

I absolutely adore the covers of your books, they truly stand out!  Do you think that these covers helped with the success of your books?

Thank you! I will have to pass along the compliments to my super, amazing, talented, brilliant cover designer. (Who also happens to be my husband.) I honestly love my covers too. I can’t ever gush about them enough. I’m sure they do help get people to notice my books. (I know I always click on the summary of a book when I love the cover.) I think the covers catch people’s eye and might even be what gets them to take a chance on a self-published author. Then hopefully the writing keeps them coming back. I may be self-published, but I am blessed to have some of the most amazingly devoted fans in the world. They are seriously the best ever! So THANK YOU! to all the people out there who have supported little ol’ me over the years. I couldn’t do it without you guys.

Would you tell us 5 Random things about you?

Hmm, let’s see just how random I can get…

Thank you so much, Kelly!

You’re welcome! And thank you Danny, for being part of the Chameleon tour and having me on Bewitched Bookworms! Bloggers are amazing!

I absolutely loved this Interview! It gave me lots to look forward to in the next books and also made me understand the Triangle a little better.. 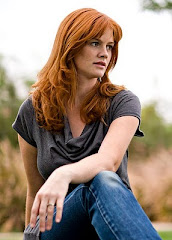 Kelly Oram wrote her first novel at age fifteen–a fan fiction about her favorite music group, The Backstreet Boys, for which family and friends still tease her. She’s obsessed with reading, talks way too much, and loves to eat frosting by the spoonful. She lives outside of Phoenix, Arizona with her husband and four children.

Chameleon by Kelly Oram was a brilliantly written paranormal take with an refreshing paranormal angle. Vivid and outstanding characters that do not shy away from lots of attitude and witty banter made Chameleon to a true page turner! Even though it massively evokes some heavy emotions, I had some problems connectionw ith Dani’s choices especially in the love departement.

This Interview most definitely made me excited all over again. Kelly’s characters and writing are phenomenal and the prospect of seeing more from Russ makes me giddy!

So check out the other Blog Tour stops to learn more! « Series Feature: The Morganville Vampires by Rachel Caine – Fall of Night #14
Discussed! The Blogger behind the scenes… 10 Random Facts about Danny. »