A car lies at the bottom of an icy ravine. Slumped over the steering wheel, dead, is the most critically acclaimed horror writer of his time. Was it an accident? His son Milo doesn’t care. For the first time in his life, he’s free. No more nightmarish readings, spooky animal rites, or moonlit visions of his father in the woods with a notebook and vampire make-up.

Or so he thinks.

Milo settles into a quiet routine–constructing model Greek warships and at last building a relationship with his sister Klara, who’s home after a failed marriage and brief career as an English teacher. Then Klara hires a gardener to breathe new life into their overgrown estate. There’s something odd about him–something eerily reminiscent of their father’s most violent villain. Or is Milo imagining things? He’s not sure. That all changes the day the gardener discovers something startling in the woods. Suddenly Milo is fighting for his life, forced to confront the power of fictional identity as he uncovers the shocking truth about his own dysfunctional family–and the supposed accident that claimed his parents’ lives.

I really enjoy psychological horror, and it’s been some time since I’ve delved into one. Michael Barsa’s debut, The Garden of Blue Roses looks deep at the adult son and daughter of a famous horror writer, just after their parents died in a car accident. While it was deemed an accident, the question remains to Milo and Klara Crane whether their parents died due to foul play. Growing up with a volatile, creative, strange father and an alcholic, enabling mother led to two strange children that were very sheltered, and once their parents were gone, Klara decides that their property is in need of some sprucing up to the tune of gardens that lead from their house into the dense woods they used to play in as children.

Introverted and a bit off, brother Milo narrates this story, and this book is full of unreliable, shady characters and missing time. While Milo only left home for a short stint at college, where he could barely stand the other attendees, his sister fled and married for a brief time and taught English. She’d recently returned home after her divorce right before her parents death. As can be seen in flashbacks told by Milo, this highly dysfunctional family was hardly holding it together, even though his father had adoring fans all over the world.

All seemed okay between the siblings until the sister hired mysterious gardener Henri Blanc, and Milo hates him immediately since he reminds him of one of his father’s most notorious villians. Milo is suspicious and jealous of Henri from the start, and knows that he will take his sister away from him–and Milo will stop at nothing to keep Klara by his side.

I give The Garden of Blue Roses a four out of five. This book is a creepy slow burn, and Milo is a great unreliable narrator in a book full of unreliable people. The writing is quite literary and atmospheric, but not stuffy at all and I quite enjoyed it. Milo and Klara seemed behind the times because of the way they were raised, and it left me guessing some times what the time period for this book is set in. Overall, this low on gore but high on creep factor novel is excellent. Great book for people who love to question what reality really is.

Find THE GARDEN OF BLUE ROSES Michael Barsa grew up in a German-speaking household in New Jersey and spoke no English until he went to school. So began an epic struggle to master the American “R” and a lifelong fascination with language. He’s lived on three continents and spent many summers in southern Germany and southern Vermont.

The Garden of Blue Roses is his first novel.

Enter the Rafflecopter widget below for your chance to win a copy of THE GARDEN OF BLUE ROSES. Open to US mailing addresses only please.

Monday, June 11th: Diary of a Stay at Home Mom 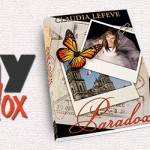