When I discovered the Darcy Walker series over last Christmas, I burned through the three available books one right after the other, eager to delve deeper into the fun and often dangerous world of young ADHD sleuth Darcy and her group of boys that do her dirty work. I reviewed books one through three in one post back in January, and I couldn’t wait for DEFCON Darcy to come out so I could see what kind of trouble Darcy found herself in.

In the previous books, Darcy has stumbled upon her cases and talked her way into getting something out if them. But in DEFCON Darcy, her fellow students have seen her get results and start approaching her so they can hire her to investigate certain things–like cheating girlfriends or thieving best friends. While Darcy’s boyfriend Dylan Taylor doesn’t think it’s the brightest idea for her to take on these cases, he knows that he won’t be able to stop her since she’s bored and nosey–and that’s a combination that keeps him on his toes.

And in true Darcy Walker fashion, one of these seemingly innocuous investigations has a dead body falling right at her feet in a night club. And this body seems to have a connection to the reporter Darcy has worked as an informant for previously, but also for a deadly thug named Jaws that has also wanted Darcy to do his bidding. But he has information that she’s desperate to obtain: more info about her mother and the murder that stole her away right in front of Darcy’s eyes at such a tender age.

While Darcy is still her snarky, sugar and coffee addicted self, the sadness and haunting weight from her mother’s murder and her own brushes with death lurk just below the surface in DEFCON Darcy. Her boyfriend Dylan is being recruited by a ton of universities for football, and he’ll need to make the difficult decision soon. Darcy doesn’t want to hold him back, but she doesn’t want to lose him either–especially when she knows that the same colleges may not be in their future–if she goes at all. Darcy is very conflicted and confused, and she makes more rash decisions and mistakes than she might normally make. Darcy takes things in the usual investigative route, bringing her boys in, like Vinnie (my personal favorite) and Finn, but things take a turn for the worse. I won’t give any hints because it would spoil so much of the last part of the book, but I was so surprised by who supported Darcy and fought for her through that stretch. This was a turn that I never saw coming, and it was bleak and hopeless at times, but Darcy kept her wits about her and made the most of the situation. She’s a fighter, a verb, as she’d say.

I give DEFCON Darcy a five out of five. This emotional rollercoaster of a fourth book was the best installment in this series so far for me. It’s heartbreaking, full of hope, and just so great. A.J. Lape’s depth and descriptions really shone here, and her versatility was in fine form throughout. You really get it all in this book: witty banter, steamy moments between Darcy and Dylan, danger, family dynamics, and mysteries to unravel. This is one of my favorite series, and I highly recommend it to everyone.

Enter the Rafflecopter below for your chance to win one of the fabulous prizes! 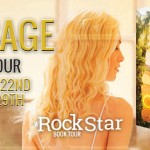 The Unique Setting of The Cage by Megan Shepherd & Giveaway