One of the fun and intriguing things I get from immersing myself in a Lauren Beukes novel is diving right into diverse characters lives with realistic voices and situations, just waiting and wondering how all of their storylines will merge later on in the book. Her latest thriller Broken Monsters is no exception to this rule, with the setting of present day Detroit as an extra character playing the part of a living, breathing, decaying backdrop.

When a half of a boy’s body is discovered–paired with the bottom half of a deer–Detroit detective Gabbi Versado suddenly has her hands full with this strange murder investigation as well as with her 15 year old daughter Layla’s attention seeking antics. Not only do we get to know the ins and outs of the police forces procedures as the try to track down a killer, we also get a more intimate look at the lives of the detectives and beat cops. The police procedural parts of the books were some of the most enjoyable segments for me, and reading about the exhaustion, the inner workings, the seemingly never ending work, was as enjoyable to hear as the forbidden relationships and the taunting and tense friendships between cops.

Besides the points of view of Detective Versado and her daughter Layla, there’s a stoic ex-con homeless man named T.K. who strives to help out the community, a reporter named Jonno who’s pushing 40 and dying for that last chance at fame, and finally, the killer himself. Throughout the novel, there’s an overarching theme on the prevalence of social media in our lives today, and the impact it can have on our lives–both good and bad. Layla and her friend Cass interact with a pedophile online and eventually meet him in person to destroy his life. Jonno video blogs about the gruesome murders to get his 15 minutes of fame, exploiting the victims and their families in the process. Twitter, Facebook, YouTube, and other sites are used to illustrate just how vulnerable these characters and in turn, we can be when we put it all out there for everyone to see.

I give Broken Monsters a four out of five. The characters and setting are vivid and well drawn. You really get to know each and every one of the main characters, even if you don’t like them. Some of their stories did seem a bit drawn out, and they all did come together in the end. The last third of the book is so suspenseful, thrilling, and intense, and it does take a bit of a supernatural turn–but it didn’t bother me so much since I’ve read The Shining Girls and expected something supernatural because of it. As a reader, this novel isn’t so much of a Whodunit since the killer is revealed pretty early on. While I don’t mind so much that I knew who the killer was or that there’s a supernatural motivation behind them, the fact that there’s never really a completely clear cut reason for the evil was a bit frustrating for me.

Get your own Audiobook at Audible: Broken Monsters.

The performance by narrators Christine Lakin, Terra Deva, Sunil Mohatra, Robert Morgan Fisher, and J. D. Jackson is amazing. Since there are frequent point of view changes, especially later in the book, I really appreciated that there were different narrators so it was much easier to keep track of everyone. The voices definitely suited the characters, whether they were a woman detective, a teenaged girl, a gruff homeless man, or a nearing 40 male journalist. I highly recommend this one in the audio version.

Sunday with the Bookworms {9} … with Exile, Wondrous Strange and Vacation!
Review: Twice Bitten

Super Six Sunday – Books to Pick Up at BEA 2014
Review: No Rest for the Wicca by Toni LoTempio 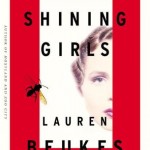