It’s so great to see so many people participating! Sorry for the reply fail on Easter. I was traveling for the holiday and had a busy week at work. Please check back later and be sure to visit the other Super Six Sunday posts to spread the love!

Character death. It’s something that is inevitable, and it’s something that can be done with finesse and subtlety. And boy, can the unexpected demise of a character you love really knock the wind out of your sails. Here’s six fictional people that made my heart hurt when they were no longer walking the earth.

***This post is spoilerific for Harry Potter, the Shades of London series, the Chicagoland Vampires Series, the False Memory series, the Caster Chronicles, and Divergent trilogy. You’ve been warned.*** Now I’ll admit that I’ve only watched the movies (I know, that’s blasphemy in these parts), but I really liked Severus Snape. He was such a great anti-hero, I should have known that the only way for him to be completely redeemed was for him to die. But it was still a bit of a shock. Some day I’ll get to these enormous books, some day… (Goodreads / Amazon) When Rory was attacked by the wannabe Jack the Ripper ghost at the end of The Name of the Star, she unwittingly becomes a terminus and can zap ghosts into oblivion. The will they/won’t they push and pull between her and head ghost police Stephen is put on the back burner while Rory heals away from school, but once they are around each other again the sparks fly. You finally get into Stephen’s history, delve into his story and personality, he and Rory finally kiss, and then wham! He’s dead. Seriously, I don’t know how book three can have a romance between someone who can kill ghosts and someone who is a ghost.   (Goodreads / Amazon) Ethan Sullivan was my favorite character in the Chicagoland Vampire series. He was sexy, smart, and the head of Cadogan House, leading his own set of vampires–including newly turned Merit. Then in book #4, Hard Bitten, he gets murdered. I still haven’t written a real review of this book or read past the next book–and a lot more books have come out. I’ve bought every one of them, but it just wasn’t the same without Ethan. Sure, he somehow comes back at the very end a few books later (I leafed through each book when they’d come in the mail). Now I’m so far behind, it’s going to take me a while to get back on track. Sigh… (Goodreads / Amazon) It’s all kinds of awkward when you lose your memory if you don’t get a special medicine at certain time intervals, especially if you lose your memory and fall in love with another one of your special fighter coworkers when you’d been dating another one for a long time. Miranda didn’t know that she had ever dated Noah, so when she fell in love with Peter, it didn’t feel stranger to her, but it was a bit strange for Noah to have to live and work with them. But what makes this worse is when Noah is killed and his memories are uploaded into Miranda, so his consciousness and memories can now mingle with hers. Knocking off Noah was a surprise, torturing Miranda with all of these memories from Noah’s point of view was a twist that I didn’t see coming. (Goodreads / Amazon) When Amma Treadeau died, it was like losing my own grandmother. She was a staple, a mainstay in the Caster Chronicles books, with her spells, talking to the ancestors, and crossword puzzles, but most of all she took such good care of Ethan. The balance had to be restored, and Amma understood that she would have to make a great sacrifice to help things along. She just wanted to make sure that her boy would be okay first. (Goodreads / Amazon) The fact that Tris dies in the final book of the Divergent trilogy probably shouldn’t have surprised me; she did spend most of the second book trying to get herself killed. I think what shocked me the most about her death was that it was a simple gunshot that took her down, and by a man that wasn’t at the top of his game, no less. What an un-badass way to go… (Goodreads / Amazon)

So those were my Super Six characters that I can’t believe the author whacked. I can’t wait to see what characters made you cry when they met their maker! 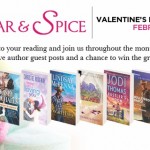 The Birth of Blood Makes Noise – Author Gregory Widen Guest Post and Giveaway
Review Eternal Kiss of Darkness and why we love Mencheres!

The Shadow Cabinet by Maureen Johnson
Sunday with the Bookworms {8}… with Fairy Luck, Suddenly Supernatural and Trial by Fire

Pretending by Holly Bourne – Excerpt
The Big Love Letter Event – Dear Cole , Your Gena – The White Rabbit Chronicles by Gena Showalter
BEA2U – We are most excited about… & choose your Book from BEA Giveaway!