Published on August 2012 by Disney Hyperion

Then Miranda uncovers a dark truth that sets her team on the run. Suddenly her past doesn’t seem to matter… when there may not be a future.

Dan Krokos’ debut is a tour-de-force of non-stop action that will leave readers begging for the next book in this bold and powerful new series.

Miranda North wakes up on a park bench, four hundred dollars in her pocket and only the memory of her name lingering in her mind. Confused, she makes her way to a nearby mall, and unknowingly unleashes psychic energy while she grows increasingly irritated that a security guard won’t help her. This energy causes mass panic and spreads throughout the shopping center, affecting everyone except for one person who calmly sits in the food court waiting for Miranda to approach.

Peter claims to know Miranda–be friends with her even–and he knows exactly what is happening to her. It turns out that Peter and Miranda, along with her boyfriend Noah and another girl Olive, are members of a genetically altered and specially trained team that can be used as lethal weapons. One of the unfortunate side effects of this genetic tampering is memory loss if they don’t get special shots at certain time intervals, and this is what has happened to Miranda. She has no memories of the past, and she will only form new memories from that moment forward if she receives those shots on time.

While Miranda and Peter try to figure out how she wound up in that park with no memory, they discover the real reason that they were created, and then they find that all four of the team are in more danger than they have ever been before.

Miranda is one heck of a kick-ass heroine: smart, a great sense of right from wrong, fearless, competitive, very adaptable, not afraid to inflict harm when the situation calls for it. It’s clear that Miranda isn’t the same girl as she was pre-memory loss, and both Peter and Noah recognize this. There is a hint of a love triangle between Miranda, Peter, and Noah, but it is subtle enough that I barely noticed it because Miranda seemed to know who she would pick from the beginning of this book.

Peter is the leader of their group, and he’s always been tasked with the hard decisions. It was his job to find Miranda when she’d gone missing, and he clearly has such a bond with her that she doesn’t even question whether or not to trust him with her life. He’s fearless too and even deadlier than Miranda. Noah and Olive round out the quartet of the team, and Dan Krokos does a great job of developing these secondary characters–their motivations, their desires–making them three dimensional and well rounded.

False Memory is an almost non-stop action packed adventure, filled with smart prose and dialogue. Miranda’s voice is realistic and fun to read, and her confusion in the beginning of the book is palpable.  There is just the right amount of romantic elements thrown in to break up the tense story line, but it by no means carries this book–which is completely refreshing. Be prepared for quite a bit of violence–vividly described and choreographed–which made False Memory even more pulse pounding and page turning. A five out of five for sure, and I cannot wait for book two in this series, False Sight.

How’d you like a chance to win a signed hardcover or a signed ARC of False Memory? Both come with a bookmark signed by Dan Krokos too. Just fill out the Rafflecopter below to enter. 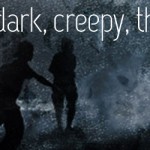 29 Responses to “Review and Giveaway – False Memory by Dan Krokos”