Not recommended for readers under sixteen due to mature content.

*takes a deep breath* What a ride!!!!! For the last 10 % I was holding my breath and … was trying to shield my eyes from what I’m reading there. You know, how you do it with a horror movie.. duh! But the end was totally worth it.. The ending was phenomenal and a perfect round up and left me breath much easier…

Jenny is a very sad and lonely girl …

Poor Jenny cannot touch you without killing you. That’s horrible and makes her a very lonely girl that just would love to have a little bit of normal. But nothing is normal in her life. Her father devastated from her mothers dead is drinking and doesn’t see that his little girl would need some love. It’s not like her father doesn’t love Jenny, he does and I was reliefed to find out he does. But he lives in his own sad world…

Since she cannot touch, she’s also the weirdo in school and has no friends. The school’s queen Ashleigh especially hates Jenny and wouldn’t allow anyone to be a little bit nice to her.

Then something happens (of course I won’t say what..) which brings Jenny closer to Seth, the super charming, handsome and wealthy boyfriend of Ashleigh… They discover that they have something in common and that she can touch him, really touch him without killing him. This turns her life upside down. But of course Queen Bee Ashleigh wants revenge – and her revenge is horrific!!!

Seeing Jenny grow up, sad and lonely breaks your heart… I would have loved to take her in my arms and tell her everything will be good. Then seeing her come to live when she falls in love with Seth was beautiful! JL described this girl in a very deep and very rich way and made you easy to connect with her.

Also Ashleigh was described and portrayed pretty perfect in her super vicious way. It is incredible how JL managed to describe this girl and makes her such a strong character in her own devil way.

The only character that I would have loved to see more deeper developed was Seth, although I have to say I also fell for him together with Jenny.

Towards the end it get’s really morbid and straight into the horror genre which I normall don’t read. But since so many of my friends were telling me how awesome this book is I had to get it finally read. And… I wasn’t at all disappointed!!!

It plays with small town prejuctice and the deepest desires of humans (..?) perfectly woven into a love story that shines through beautifully. With it’s horror elements and sex and drug part it is more for older YA than for the younger generation. But since I’m old enough to deal with it I very much enjoyed this.

The closure JL provides made totally up for the morbid last 10% and left me breath again normally. I didn’t expect this end to satisfy me so much, but it did! This story sucks you in once you started and you won’t be able to put it down! *breath out in relief* Now I need some sunshine and flowers (maybe some pretty winged Faeries) before I will get to the next one Tommy Nightmare from which I heard must be fantastic as well!!

Random Notes and additional info:
I don’t know why it too me so long to read it, specially since Heather and Pushy are so head over heels about JL and his books. But I’m glad I did now! Tommy Nightmare is already out and I will review it next week.

The third book in the series will be released soon, so you can now start reading since the end is close. And you won’t do anything wrong since it’s only $0.99 at amazon

Much Love and Happy Saturday!

The Geography of You and Me by Jennifer E. Smith
Bumped by Megan McCaffer: a review 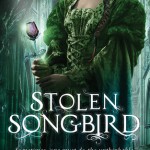 « My Friday Love Premiere
In My Mailbox – a cutie edition »