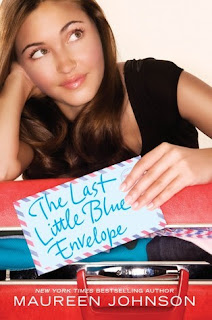 Ginny Blackstone thought that the biggest adventure of her life was behind her. She spent last summer traveling around Europe, following the tasks her aunt Peg laid out in a series of letters before she died. When someone stole Ginny’s backpack—and the last little blue envelope inside—she resigned herself to never knowing how it was supposed to end.

Months later, a mysterious boy contacts Ginny from London, saying he’s found her bag. Finally, Ginny can finish what she started. But instead of ending her journey, the last letter starts a new adventure—one filled with old friends, new loves, and once-in-a-lifetime experiences. Ginny finds she must hold on to her wits . . . and her heart. This time, there are no instructions.

Heather: I was so excited to get this sequel to 13 Little Blue Envelopes (our review here) from HarperTeen. I devoured this book a few days after I got it in the mail, but I had to finish up a book and this one was calling my name the entire time.

At the conclusion of 13 Little Blue Envelopes, Ginny’s backpack was stolen on a beach in Greece. She never had a chance to open the thirteenth envelope and she returned to America thinking she would never know the contents of the final piece of her deceased Aunt’s puzzle.

Fast forward from the summer to the end of December. Ginny has been corresponding with Keith via computer in the months following her European adventure, but he’s been around less and less of late. When an anonymous person emails Ginny saying that he bought her backpack and has the unopened envelope from her aunt, she jumps at the chance to return to England to not only get the last envelope, but also see Keith.

When she arrives in England, her aunt’s flatmate, Richard welcomes Ginny back into his home like she is a beloved relative. Eager to reconnect with Keith, she is very surprised to see that Keith has a new girlfriend named Ellis. Keith insists that he be directly involved with Ginny getting her letters back from the mysterious Oliver. When Ginny and Keith meet up with Oliver, this stranger holds the letters hostage and won’t reveal the contents unless Ginny travels with him to find the pieces of Aunt Peg’s puzzle. Much to Ginny’s chagrine, Keith’s girlfriend invites herself along for the trip.

As always, Maureen Johnson has a very vivid and fun way to describe common situations. While Ginny is still struglling with a few self esteem issues, I really did like the mature route she took when handling Keith’s new girlfriend. As the four of them travels take them to London, Paris, Ireland, and Amsterdam, tensions run high between them. But the four travelers also find a way to have a little bit of fun during the trip.

Overall, The Last Little Blue Envelope is a great sequel. Ginny’s world was very easy to slip back into. The old characters were great and the addition of a few new characters added some needed complications. Towards the end of the book, things did fly a little too quickly. The ending did kind of leave you hanging and yearning to see what happens with Ginny and Oliver. My fingers are crossed that there will be a book three in this series.

cutie:
A note of thanks: I was lucky enough to get a copy of this book from NetGalley from the good peeps over at HarperCollins! A big thank you to them for the chance to read this before it came out.

a description: It’s Christmas time and Ginny is wondering what to do with her life. She’s preparing for college. She’s excited about her new sorta boyfriend, and she’s just got back from a life changing journey backpacking across Europe guided by 13 little blue envelopes from her Aunt Peg. And yet… something is just not right. When she receives an email from a stranger named Oliver who claims to have found her missing letters, Ginny jumps on the next flight to the UK in hopes of recovering her stolen property and picking up with her boyfriend where they left off. Unfortunately, Ginny’s in for a few unpleasant surprises…

rambling thoughts: I truly enjoyed slipping back into Ginny’s world. Once again, Ms. Johnson takes us on a great journey through Europe adding a few new destinations on the map. The Last Little Blue Envelope is a little more of a tear jerker than it’s predecessor 13 Little Blue Envelopes. The addition of a few new characters, Ellis and Oliver were welcomed. Keith and Richard make a reappearance, and of course, their is the ever presence of good ole Auntie Peg and her crazy, self-involved, rambling letters.

Once again, I was pulled in by Ms. Johnson’s voice and style. I find her fresh, witty, and all around fun. She has a knack for bring the setting to life and making it a character in her stories. Ginny, while still wishy washy at times, was a slightly more solid character and even seemed to attempt to stand up for herself at times, which I found heartwarming. I wish we could have spent a little more time with Richard and learned a little more about Oliver. And that someone would have slapped the smirk off Keith’s face. Did I say that?

I must admit that I felt this stories pacing picked up far too quickly toward the end and left the readers somewhat hanging and without a satisfying conclusion. I’m all for open ended stories, however, this one just felt like it took a jump off a cliff. Or better yet, that the author decided to end her novel the way Aunt Peg ended her 13 letter to Ginny right in the middle of a… *winks*

Overall, the getting going point of this novel is fantastic. The author infused her sequel with new and interesting characters, while still bringing life and freshness to old ones. And she made me want to learn more about Ginny and her future plans. I just wish she would have given us just a little something more at the end or taken a little more time. I don’t know. My only guess is that maybe a third book will be added to this series. Something I’d be excited to see happen.

We give this fun and well written sequel a four.