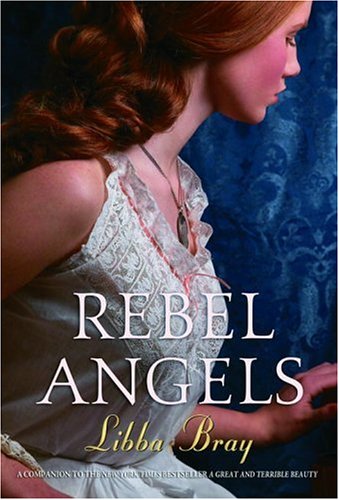 Ah, Christmas! Gemma Doyle is looking forward to a holiday from Spence Academy, spending time with her friends in the city, attending ritzy balls, and on a somber note, tending to her ailing father. As she prepares to ring in the New Year, 1896, a handsome young man, Lord Denby, has set his sights on Gemma, or so it seems. Yet amidst the distractions of London, Gemma’s visions intensify–visions of three girls dressed in white, to whom something horrific has happened, something only the realms can explain. . . .

The lure is strong, and before long, Gemma, Felicity, and Ann are turning flowers into butterflies in the enchanted world of the realms that Gemma alone can bring them to. To the girls’ great joy, their beloved Pippa is there as well, eager to complete their circle of friendship.

But all is not well in the realms–or out. The mysterious Kartik has reappeared, telling Gemma she must find the Temple and bind the magic, else great disaster will befall her. Gemma’s willing to do his intrusive bidding, despite the dangers it brings, for it means she will meet up with her mother’s greatest friend–and now her foe, Circe. Until Circe is destroyed, Gemma cannot live out her destiny. But finding Circe proves a most perilous task.

for those who have not read the first book.
I loved the juxtaposition of the frivolity of the London Season with the ominous, overwhelming issues of Realms. As much as Gemma grew in the first book, she is still just a girl like any other when it comes to dreams of boys and parties and wanting to fit in. And so it would seem are the other girls, Felicity and Ann and even Pippa. All four girls are searching for things that are in some ways completely out of reach in this book, and all four have to come to terms with what it takes to reach for a dream so high.

Beyond that, Gemma must learn to take responsibility for the events she set into motion in the last book. As much as she wants to enjoy the magic and sink into the life of parties and pretty dresses that the London Season provides, she broke something in the Realms when she released the power from the Ruins and she must restore the balance.

But Gemma is spectacularly unprepared for this kind of responsibility. She has a lot to learn in this book about friendship, trust and leadership.

I love how in the midst of this fantastic, paranormal mystery story, Libba Bray has sown the seeds toward tackling some major issues. It’s interesting that she’s able to obliquely refer to these topics, bringing up some seriously disturbing plot lines and yet she does so with such a deft hand that the story never sinks into a pedantic morass. Rather, it adds a stroke of authenticity to these characters, where not all books can be judged by their glitteringly beautiful covers.

Bottom Line
Again, Libba Bray brings her amazing skills as a story teller to the fore in this enthralling, enchanting book.

For me, another must read!!!

Final Notes
As I mentioned last week during my review of the first book in this series, A Great and Terrible Beauty, I’ll be reviewing this entire series this week, so stay tuned, dear reader, for the review of the final book, The Sweet Far Thing, later this week.