hy72ir6n49g5z831meqb These books are banned?Oooh! Let's read them!! • Bewitched Bookworms

Pushy: One of the curious things about the effects of censorship is to convey upon the item of prohibition an aura of irresistibility. Fortunately, as an adult, I have the ability to decide for myself what I will read and what I won’t. I live in a city with an amazing library, have free access to book stores and the internet and the means with which to purchase the occasional book. But not everyone is so lucky.

That’s why Banned Books Week is so important to me. As an American, I love my freedoms, and I cherish the right of free speech, speech in all its forms. And it saddens me when others have that right impinged on, whether it be by well intentioned elders or those with less laudable motives.

So when my good bloggy friend, Susie from Apples N Feathers, asked I was interested in celebrating Banned Books Week this year by reviewing some books that seem to be perennial favorites for being challenged, I said YES!

The book I chose was The Chocolate War by Robert Cormier. 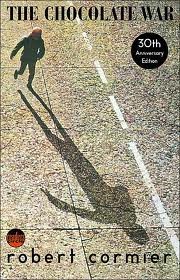 Does Jerry Renault dare to disturb the universe? You wouldn’t think that his refusal to sell chocolates during his school’s fundraiser would create such a stir, but it does; it’s as if the whole school comes apart at the seams. To some, Jerry is a hero, but to others, he becomes a scapegoat–a target for their pent-up hatred. And Jerry? He’s just trying to stand up for what he believes, but perhaps there is no way for him to escape becoming a pawn in this game of control; students are pitted against other students, fighting for honor–or are they fighting for their lives? In 1974, author Robert Cormier dared to disturb our universe when this book was first published. And now, with a new introduction by the celebrated author, The Chocolate War stands ready to shock a new group of teen readers.

It’s uncanny how universal the human experience, particularly the teen-aged human experience is, especially when captured by an author who’s willing to tell a story unflinchingly. This is the case with The Chocolate War, published over thirty years ago.

In this story some deep and powerful themes are explored: peer-pressure, mob mentality, ethics and evil. Much like Lord of the Flies, we see in Trinity College Prep a microcosm of society, where the strong prey upon the weak and so many people would rather ignore the petty insults and degradations that go on around them rather than stand up and risk becoming a target themselves.

At Trinity, the Vigils (one part secret fraternal order, one part ruthless street gang) have been expanding their control over the students ever since Archie Costello became the group’s Assigner, the person who sets the often dangerous, always slyly funny tasks for kids to complete. Normally the sole purpose of the tasks are to stir up a little trouble and provide some amusement for the student body in general and the Vigil members in particular. But under Archie’s reign the tasks become increasingly daring and he’s forced to keep pushing himself (and those he commands) to amaze and astound the school.

And what starts as a simple prank, forcing a freshman student to endure the school’s displeasure for two weeks by refusing to participate in the chocolate fund raiser, goes awry when the student in question, Jerry Renault decides not to stop his assignment. Jerry, stung by the ruthless application of power by interim headmaster, Brother Leon, decides that he will refuse to sell his chocolates to the increasingly bitter end.

What’s so amazing about this story is its raw intensity. Robert Cormier strips away the veneer of civility put on by society and shows the boys of Trinity with all of their naked aggression and perilous foibles. The boys (and some of the adults) are by turn conniving, deceitful, lustful and downright psychopathic. But they can also be stunningly self-aware and kind. And despite how dark the portrayal of these boys is in this book, the truth of the story is impossible to deny.

There’s a reason why teachers have been using this searingly real and powerful book to teach about morality and the periels of group think for the past 30 years. It’s because The Chocolate War is an amazing story, filled with characters of variety and depth, told by an author of supreme talent.

When I read the synopsis of this book before I started it, I wasn’t sure what about it would cause it to be consistently challenged over the past 30 years. And I must confess that after finishing it, I’m just as baffled.

Now perhaps the same adults who call for this book to be removed from their kids’ school shelves are also closely regulating what their children watch on TV. But as with all unpleasantness in life, it seems to me that rather than bury our heads in the sand and pretend that these sorts of things don’t happen, it’s ultimately better to face them head on, open up healthy discussions and make sure our children know that rather than ignoring problems, we prefer to solve them.

Susie: Freedom of Speech. I’ve always had it. I’ve always had complete access to books that were banned in other places. Because growing up with a feminist, hippie momma allows you to get a taste of reality and even as a young child I knew the world wasn’t all puppies and rainbows (although I like to imagine it is). So when I suggested this to Pushy, I already had a perfect book and one of my favorites in mind for the review. 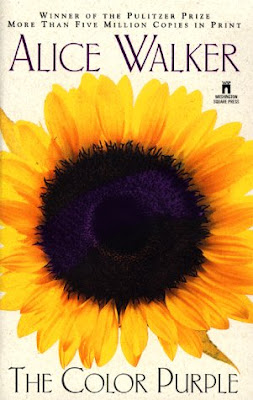 Taking place mostly in rural Georgia, the story focuses on female black life during the 1930s in the Southern United States, addressing the numerous issues including their exceedingly low position in American social culture. Celie is a poor black woman whose letters tell the story of 20 years of her life, beginning at age 14 when she is being abused and raped by her father and attempting to protect her sister from the same fate, and continuing over the course of her marriage to “Mister,” a brutal man who terrorizes her.

This truly is one of my all time favorite books. The story of Celie through her eyes takes the reader in and slaps them in the face of reality. I’ve always been a fan of unique writing forms and odd POVs. This is one of those books. While it is told from Celie’s point of view, the form is done in letters. First starting out to letters or prayers to God for the abuse, both sexual and physical, she receives at the hands of her Pa and later the moving letters to her sister Nettie during the time of her marriage to Mister. The novel is filled with rich and rounded out characters that you either hate or love. Such as Shug Avery or Sophia. This novel has been a constant target since its release and appears on the American Library Association list of the 100 Most Frequently Challenged Books of 2000-2009.

This novel moves me each time I read it. The pain, the terror, and the beauty of a sisterly love that never dies even in the worst of situations is the most reality driven masterpiece I will ever read.

After rereading The Color Purple and also taking a glance at the list its on(number 17 BTW) I thought to myself, what is America scared of?

Yes, The Color Purple is filled with Racism, Sexual Violence, Language, Content, Sexism, Discrimination, Domestic Violence, Teen Pregnancy, and Homo-eroticism. But guess what America? You can’t just hide these topics away in your little box. They are out there and whether you like it or not your children eventually grow up and find out that these things exist. Why not explain it to them? Show them the reality of life, allow them to experience books like The Color Purple and The Chocolate Wars, and once they read them discuss them openly. Allow a young person to ask questions don’t leave their freedoms locked up just because they aren’t of age because I’ll tell you one thing…once that kid goes off on their own their naivety and culture shock may get the best of them.

Well that’s it! Two great books that, while often banned, are wonderful reads! We hope you enjoyed the reviews and we’d love to hear what you read in honor of Banned Books Week! 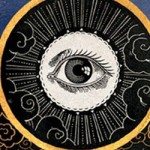