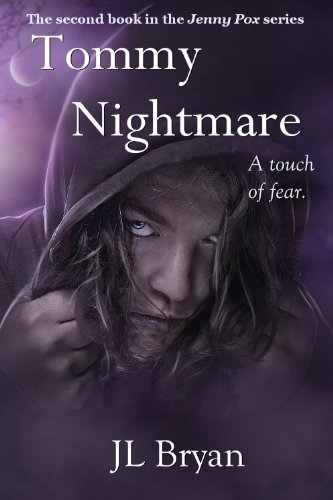 Before we get started,
please note that if you have not read Jenny Pox,
there are spoilers included in this review.

Sorry for those who were spoiled
before we realized this!!

Pushy: I know we’ve made no secret of our love for JL Bryan and his book, Jenny Pox, here at the Bookworms, but I can say, without a doubt, that this sequel was FAN-FREAKING-TASTIC!!! Personally, I went from being unsure as to how Mr. Bryan was going to turn his amazing, what I considered to be a stand-alone, book into a series, but I’ll tell you something. Mr. Bryan is CLEARLY smarter than I am because not only did he live up to the wonderment that was Jenny Pox, he truly surpassed it.

In this book, we first meet a brand new character, Tommy, in his early teens; an orphan living in foster care with a highly religious, dubiously sane care-taker. In quick order we learn all the important facts about him: much like Jenny and Seth, he has a power: fear; unlike Jenny and Seth, he has little moral compass. As the story progresses, we pick up where Jenny Pox left off, Ashleigh’s dead and the town of Fallen Oak is for all intents decimated. But Jenny and Seth are still alive and have to figure out where they go from here. And everything they believe is tested as they realize school’s over and they’re going to be launched into the real world.

I loved the historical slant Mr. Bryan took with this book. I am a huge classics nerd, so the ancient Greek history that he weaves into the story was a big hit with me. Plus, I loved the introduction of the new characters who fit in so perfect, it’s as if they were always a part of Jenny’s world (which of course they were, we just didn’t know it in the last book!).

Heather: Yeah, I’ll admit that when JL Bryan emailed me a digital ARC of Tommy Nightmare, I moved it right to the top of my to be read pile. (Don’t get me started on how many books deep that is right now…). I devoured the second installment and started bugging Pushy about hurrying up and reading it (like neither of us is busy, right? Priorities, priorities…). So I ran full steam ahead through this book, so happy to be back in the decimated town of Fallen Oak.

At the end of Jenny Pox, it’s pretty obvious that Seth (with his healing powers) and Jenny (with her pestilence powers) are opposites and balance each other out. But Ashleigh’s power was to make people feel love (and boy did she use that power to get her way and further her evil agenda), so you automatically think “What the hell is the opposite of love?” Well, the author immediately gives Ashleigh’s opposite the spotlight.

So we meet Tommy, an orphan, with the power to scare the crap out of people. His foster family is a bit odd and intolerant, and JL does a great job of making you feel for poor little Tommy. But then the story fast forwards to the same time as the end of Jenny Pox. And the opposite of Ashleigh sees her little television interview from jail. Realizing who she is, Tommy makes getting to her his main priority.

Once Tommy reaches Fallen Oak and sees that his opposite is gone, he finds a way to bring her back. Together, they set out to destroy Jenny, once and for all. The National Guard and the CDC (the doctor’s name is Heather, wink, wink…) have quarantined the town to get to the bottom of the lethal outbreak that killed a good chunk of the town. So Jenny has a ton on her plate: trying to not be discovered by the government, trying to keep her relationship with Seth strong, and trying to keep away from Tommy.

JL Bryan weaves in a lot of historical scenes because Jenny, Tommy, Seth, and Ashleigh have been reincarnating with their powers intact and have been drawn to each other over hundreds of lifetimes.

This strong second installment of this series answers several important questions, but also poses new ones. Why do they have these powers? And more importantly, are there more than the for of them with such powers? I’ll have to wait impatiently for the third installment to get the rest of my questions answered.

Pushy: JL Bryan delivers a sequel that will leave you begging for more!

Heather: I seriously screamed at the end of this book. I couldn’t believe it was over and we’d have to wait until freakin’ Fall for the third book in this series. JL Bryan took a somewhat small supernatural universe in book one and expanded it in a very believable, exciting way. Seriously download Jenny Pox and Tommy Nightmare right now. You won’t be disappointed.

If like us you get to the end of the book and are DYING for more, take heart! Jenny, Seth and the whole gang will be back in a few long short months! That’s right, even though we don’t know the title yet *hint, hint, Jeff, get this book up on Goodreads already!!*, the next book in this series will be available this fall!

Fingers crossed that the eminent arrival of Mr. Bryan’s first born child does not delay it! Not to say we’re not super excited for Mr. Bryan to join the ranks of the few, the proud, the tired…but we need to know what happens next!!!! So, fingers crossed and hold tight, because more is on the way!

The Sweetest Burn by Jeaniene Frost – Review and Giveaway
Review Eternal Kiss of Darkness and why we love Mencheres!
Review: Thirteen Reasons Why by Jay Asher