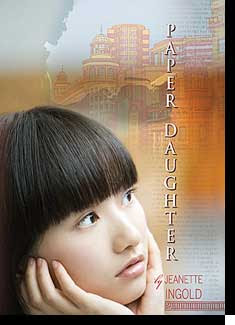 Maggie Chen was born with ink in her blood. Her journalist father has fired her imagination with the thrill of the newsroom. But now Maggie’s father has been killed, and she is determined to keep their dreams alive by interning at the local newspaper. While assisting on her first story, suspicion of illegal activity falls on Maggie’s father, and she knows she must clear his name. Drawn to Seattle’s Chinatown, what she finds is far from what she expected: secrets, lies, and a connection to the Chinese Exclusion Era. Using all of her newspaper instincts and resources, Maggie is forced to confront her ethnicity—and a family she never knew.

It’s interesting how the mystery in this story creeps up on you. When I read this book I hadn’t read the synopsis, so I didn’t know that Maggie’s father’s lies would continue to grow until they implicated him in illegal activity, thereby threatening everything she held dear about him. But the build up was subtle and so smoothly handled that you won’t know for sure just who Maggie’s father is: honest and true news reporter or horribly flawed crook.

Set against Maggie’s story, and that of her father, is the story of two Chinese imigrants, Fai-yi and Sucheng Li, twin teenagers who flee 1930’s China for the promise of Gold Mountain and the New World. The interplay between these two stories continues to build throughout the novel, ultimately becoming intertwined in an elegant and satisfying manner.

Great contemporary and historical characters and an intriguing, interwoven plot make this a great summer read!

Paper Daughter is Jeanette Ingold’s seventh book in a diverse oeuvre that, in her website biography’s words, “ask young adult readers to explore lives beyond their own.” Some of her other, award winning books are Hitch, which tells of teens in the Civilian Conservation Corps during the Great Depression; The Big Burn, about the 1910 wildfires that swept the Northwest; and her 1996 debut novel, The Window, which tells the story of “[a] girl, blinded by the auto accident that killed her mother, [who must come] to terms with her disability–and her new life.” Any of these would make great summer reading. « Blog Hop and Weekly Round Up
Summer Book ContestWINNERS!!!! »