After a much needed rest due to a few chronic injuries and a lot of travel for work, I’m excited to bring you an excerpt from Stefanie London’s latest book in the Paws in the City series, PETS OF PARK AVENUE.

Scout Myers could think of several good reasons to be on all fours with her ass in the air, but pandering to the world’s most disagreeable cat was not one of them. Isaac Mewton—and yes, that was his real name—was a Scottish fold with the sweetest face you’d ever see. Unfortunately, despite the adorable camera-ready mug, the cat had the same disposition as those grumpy old Muppets who liked to sit on a balcony and heckle people for sport.

And Scout loved animals. One of the best things about her job at Paws in the City, New York’s premiere pet social media and talent agency, was getting to be around furry critters all day long. Isaac Mewton, however, was officially on her shit list.

“I can see something shiny back there.” His owner pointed. “We can’t carry on without his favorite toy. He won’t sit still.”

Scout gritted her teeth and wedged her hand between the wall and a white IKEA bookcase. Cringing, she prayed none of New York’s finest creepy crawlies were hiding back there and wriggled her fingers.

Eventually her fingertips brushed something hard and plastic. That had to be it. How the cat had managed to bat his toy so hard it lodged itself into such a small space was incomprehensible. Almost as incomprehensible as this client’s expectations. Seriously, how were they supposed to turn her precious kitty into a star if it wouldn’t even sit still for a headshot?

“Got it!” Her hand—and the toy—popped mercifully free.

“Great, now can we get on with it?” The client looked at Scout like this was all her fault. “I have an appointment to get to.”

Paws in the City wasn’t only Scout’s workplace; it was the brainchild of her best friend and the lifeline Scout had needed when her life couldn’t sink any lower. She came into work every day striving to do the best job possible, both for herself and her boss.

That meant pasting on a can-do smile, even when she wanted to launch a cat toy at someone’s head.

“Why don’t you get him to play with it?” Scout said, handing over the hard plastic ring, which was clear and suspended with glitter. “He might be more receptive if it comes from you.”

The woman crouched in front of the cat and attempted to engage him with the toy. But he immediately batted it across the room, where it slammed into the wall and bounced onto the floor. The photographer, who had shown a level of patience that should make her a shoo-in for sainthood, raised an eyebrow. This was going nowhere. Isaac Mewton sat on a velvet pouf with an artfully arranged bookshelf behind him that Scout and the photographer had prepared for his portrait, staring down everyone in the room like an angry king.

It was time to try something new. Scout retrieved a feather toy from their stash in the office. She needed to get these photos done now. Isla was due back in less than five minutes and they hadn’t gotten a single decent shot of the cat.

Let’s be real, what client would want to work with such a demanding, fussy model anyway?

Still, Scout didn’t want it to look like she didn’t have things under control.

“He doesn’t like those.” The cat’s owner shook her head and pointed at the feather toy. “It won’t work.”

“Well, we’ve tried all the toys you brought with you, so maybe a Hail Mary is exactly what we need,” Scout replied tightly, her smile turning brittle. Lord give her strength to deal with this woman! The cat was a pain, sure, but animals were animals. They couldn’t be blamed for their behavior. Their human counterparts on the other hand…

Isaac Mewton had gone still, his eyes on the new toy, and the photographer seized the moment to start snapping. Scout moved the feather in gentle sweeping motions, and the cat’s eyes followed with intense focus. He raised one paw and batted at it, ignoring the steady click, click, click of the camera.

So much for him not liking it.

Scout shoved the snarky inner comment to one side and focused on getting the cat to engage so they could wrap up the meeting as quickly as possible. Next to her, the owner huffed in annoyance as though she couldn’t believe her darling Isaac had proven her wrong.

When they were done and the woman and her cat had left the Paws in the City office, Scout’s shoulders sagged in relief. She was a people—and an animal—person at heart, but she had a pet peeve, no pun intended, about entitlement. Call it a leftover from her childhood. Her mother’s legacy was little more than a collection of emotional scars and personal quirks, but she had taught Scout one very important lesson.

Nobody owed her anything. Whatever she wanted in life, she would have to earn it.

“Are all your clients like that?” the photographer asked as she packed up her equipment. “The woman seemed to think her cat was royalty.”

Scout shook her head. “Most clients are lovely and happy to have our assistance. But there’s always the rare few who think they’re superstar material, without being willing to put in the work.”

“How long have you been open now? Only a few months, right?”

“Six months.” Scout couldn’t help her beaming smile. It might not be her business, but she was damn proud to be part of it. “And we’ve already signed over twenty clients.”

“Including Miss Pain in the Rear and her angry feline overlord?”

“We’ve had several requests for cats lately, and he was by far the cutest we’ve seen.” Scout sighed. “Let’s hope he’s in a better mood when it comes time to front up for a paying job.”

Paws in the City represented clients with four (and six) legs. They provided social media coaching to the humans running the accounts, worked on brand strategy and generally acted as a go-between in brokering sponsorship deals and other types of opportunities. They also booked animal talent for commercial shoots, both of the print and television variety. Every day was different. Scout managed the operational parts of the job, like booking appointments, supervising headshots, fielding media enquiries and consulting with the freelancers, such as photographers and grooming specialists. Plus any other random bits and bobs, like making sure they hadn’t run out of dog treats or pods for their coffee machine.

Isla always said their mission was to make the internet a happier, furrier place, and Scout loved that sentiment.

A few minutes after Scout bid the photographer farewell, the front door swung open. Though cute, their office wasn’t much bigger than a postage stamp, so Scout’s desk was situated in the waiting area and therefore doubled as their reception desk.

Isla breezed in, a wool coat slung over one arm and her long dark hair bouncing around her shoulders in soft curls. She was dressed in a pale blue blouse, fitted black pants and a killer pair of silver stilettos—a much fancier outfit than what she usually wore in the office. Black, though it was one of Scout’s favorite colors, was not the best when working with their furry clients.

But Isla had been at an important networking event today, so there was no need to worry about dog fur.

“They’re gorgeous, but they’ve been killing me all day.” She dropped onto one of the pink velvet seats lining the far wall and kicked off the shoes, groaning in relief.

“That’s a rookie move,” Scout replied. “Now your feet are going to puff up and you won’t be able to get them back on.”

“I don’t care if I have to meet Theo barefoot tonight, there’s no way I was keeping them on a second longer than necessary.”

Isla grinned. “Theo loves me as I am, blisters and all.”

It was true. Scout wasn’t sure she’d ever seen a man so in love.

Not even on your own wedding day?

Scout shoved the unpleasant reminder to one side. The last thing she needed right now was for her mood to take a dive, thinking about inconvenient things like the fact that she was still married.

Or that she hadn’t seen her husband in five years.

About PETS OF PARK AVENUE 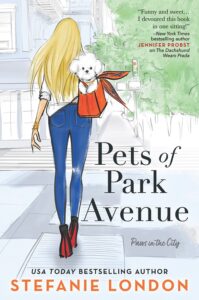 The perfect romcom for dog lovers! Pets of Park Avenue is the story of a self-confessed hot mess who learns that life is more fun when things don’t go according to plan.

What do you do when The One is also the one who broke your heart?

Self-proclaimed hot mess Scout Myers is determined to prove she’s finally got her act together. Raised by grandparents who saw her as her wayward mother’s wayward daughter, Scout’s used to being written off. So when the opportunity for a promotion arises at Paws in the City, the talent agency where she works, Scout is desperate to rise to the occasion. With shared custody of her little sister also on the line, Scout can’t afford a single mistake…like suddenly needing a canine stand-in for an important photoshoot. Luckily (or not) she knows the owner of the perfect pup replacement: the estranged husband she walked out on years ago.

On the surface, it appears Lane Halliday’s life has been blissfully drama free without Scout, but she suspects her handsome-as-ever not-quite-ex-husband doth protest too much. Working together even feels like old times—except for all that lingering, unresolved tension. But Scout’s not sure she’s ready to confront the reasons she left Lane, and when their plans to finalize the divorce become very real, Scout starts to wonder whether second chances might be worth a little hot mess.

Paws in the City – standalone
Book 1 – The Dachshund Wears Prada 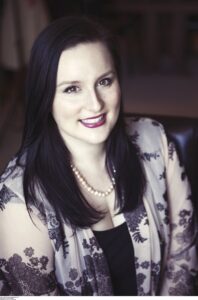 Stefanie London is a USA Today Bestselling author of contemporary romance. Her books have been called “genuinely entertaining and memorable” by Booklist, and her writing praised as “elegant, descriptive and delectable” by RT Magazine.

Originally from Australia, she now lives in Toronto with her very own hero and is doing her best to travel the world. She frequently indulges her passions for lipstick, good coffee, books and anything zombie related. 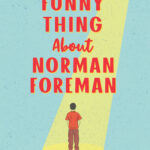 The Funny Thing About Norman Foreman by Julietta Henderson – Excerpt