Happy Friday, and let’s kick off the long holiday weekend with a thriller that is sure to make your heart race. Meg Elison’s NUMBER ONE FAN features a popular author who is kidnapped and held captive by someone who says they love her books. Sure to be creepy, twisted, and what looks to be a cautionary tale to women to always be on their guard, dive into an excerpt from NUMBER ONE FAN below.

The car rolled into view, the lit decals on the dashboard letting Eli know that her driver was typical: working for all the rideshare services at once.

Gotta hustle, she thought as she quickened her pace away from the airfield. She hoped he hadn’t been waiting long.

“Elizabeth?” He seemed bored, not even bothering to turn around.

“Sure,” he said, tapping his phone.

She settled in, her satchel beside her. “Thank you.”

The car was air conditioned against the cushion of heat that pressed against its tinted windows, and as they headed toward the freeway, she finally began to relax. She was grateful the driver didn’t seem to want to talk. She was tired of talking from the event, and her throat was dry and sore.

“There is a cold drink there in the cup holder. Down in the door.” His voice was low, a raspy baritone.

“Oh, cool, thanks.” Eli reached down and felt the blessed condensation on a plastic bottle. She pulled up a blue Gatorade and wrenched it open, suddenly very thirsty. She drank half of it in huge gulps, disliking the weird, salty taste of the electrolyte mixture but unable to stop herself. It felt good, after hours of talking and the dry air of the flight. She breathed deep and drank again, coming close to finishing it off.

Must be the heat, she thought. That and the two miniature bottles of Jack Daniel’s she’d had to calm her nerves on the plane.

Her phone vibrated in her pocket in an unfamiliar cadence and she slid it out to check.

Her notification from the rideshare app blared BRENDA HAS CANCELED THE RIDE FOR REASON: NO-SHOW. YOU HAVE BEEN CHARGED A CANCELLATION FEE OF $5.

Eli frowned at her phone. Had she summoned two cars by accident?

She unlocked it with her facial scan and checked. The app showed only one ride: a black Prius driven by Brenda, which had arrived five minutes ago and canceled four minutes after that.

It wasn’t a busy day at the airfield. It certainly wasn’t curbside pickup at SFO, but it was still possible that she had gotten in the wrong car.

But he had known her name.

She leaned forward to get the driver’s attention. “Hey, just clarifying—you’ve got my info, right? I just got a cancellation from another driver, and I’m worried that I got someone else’s ride.”

The driver tapped his phone and his eyes darted between it, the rearview mirror, and the road. “Elizabeth Grey. Headed to the Sheraton, right?”

The phone displayed a highlighted blue route along the freeway. It was a map program, rather than the rideshare’s software, but Eli had seen drivers toggle between those before. She glanced up at the rearview mirror, but his eyes were on the road and he had put on a pair of dark glasses.

Eli settled back into her seat. She stared out the window and thought of home, of the deep grey fog rolling down over the hillsides and the wind coming in, salty from the Bay. She was homesick. Even in the same state, the air felt wrong on her skin. Los Angeles had been an endless parade of palm trees against a blameless sky, and the tacos were so good she could barely stop shoveling them in, but the traffic had left her feeling exhausted upon every arrival.

And then there was the way that people looked you over in Los Angeles, deciding whether you were famous or fuckable or useful in some other way before sliding on to the next thing. Her audiences had been lively and engaging but draining, and after each of her events, she’d wanted nothing but some dinner, a hot bath and sleep. Maybe a couple fingers of bourbon over ice.

Traveling always left her wrung-out and unmoored. It didn’t help that the sun was so all-encompassing outside the car it could have been anywhere, any time of day, the hot, white light blinding. She couldn’t look at a surface other than the black asphalt without squinting. Living in San Francisco gave her what she had thought was a passing acquaintance with the sun, but the glare as the 10 freeway led out of Los Angeles county and into the high desert landscape was just too much.

How are people here not dog-tired all the time? Doesn’t the heat suck all the life out of them? How do they ever leave the house? Christ, it’s March. Imagine later in the year. I gotta get some sunglasses.

She set the phone beside her on the seat to avoid pawing it in and out of her jeans. She belatedly buckled her seatbelt as they picked up speed. Out the window, the freeway was sliding past, one unfamiliar mile blending into the next.

The driver turned his radio on. It annoyed her at first that he had not asked, but then she reminded herself that he probably spent the whole day in his car. She wasn’t talking; he was probably both lonely and bored. Let him have his Oingo Boingo.

He changed lanes to get into the faster flow of traffic and the motion of it made her feel a trifle ill. This heat had produced all kinds of new feelings. She ignored it, drinking the last swallow of the Gatorade.

She looked around for a polite place to deposit the bottle. The motion of her head made her dizziness worse and she tried to blink it away. “Do you have a spot for trash?” she asked him. As the words slid out of her mouth, she realized she was slurring like she was very, very drunk. She was horrified to realize she was drooling, too.

Eli tried to get a hold of herself. She pushed with her palms and worked to sit up straight but found that she could not. Her head felt far too heavy for the wet noodle of her neck to have ever supported. Her abs were slack and her spine was a worm. She sagged against the seat; the seatbelt the only thing keeping her from sliding to the floor.

“Whass going on?” The words seemed to take a long time to reach her ears.

Oh shit, I’m having a stroke. An old classmate  of Eli’s had had a freak stroke event a week shy of her thirtieth birthday. Frantically, she tried to recall the diagnostic that the woman had posted on Facebook right after. She couldn’t speak clearly. She couldn’t lift her arms at all. Her hand flopped uselessly in the direction of her phone.

“Relax,” he said clearly, his voice less deep than before. “You are fine.”

With her last spasm of strength, Eli pulled at the door handle, intending to tumble out of the car. The child safety lock held her in place.

I’m not fine, she thought with her last clear and lucid moment. As her eyes fell closed like heavy curtains, she finally registered that they were going the wrong way. The steely spike of panic that stabbed at her heart was almost enough to counteract the soporific effect of whatever was wrong with her, but not quite. Fighting, terrified, she slipped out of consciousness.

About NUMBER ONE FAN 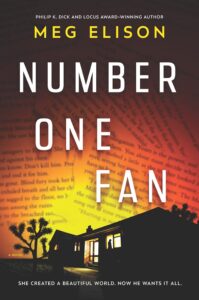 A headlong rush of a thriller/horror that is Misery for Millennials, about a bestselling author who is abducted by her biggest fan and must figure out who he is, where she is, and how to survive and escape, set against the backdrop of fan and convention culture, the literati and the #metoo movement.

Bestselling fantasy author Eli Grey gets into a cab without checking it’s hers, and unquestioningly accepts a drink from the driver. Then she wakes up chained in his basement. With no close family or friends expecting her to check in, Eli knows she’s on her own to save herself. She soon realizes that her abduction wasn’t random–she was targeted. And though she thinks she might recognize her captor, she can’t figure out quite why, or what he wants. But it is clear that he is very familiar with her work, and deeply invested in the fantastical world she created in her books. What follows is a test of wills as Eli pits herself against a man who believes she owes him everything, and is determined to take it from her.

With unflinching prose, NUMBER ONE FAN examines the tension between creator and work, fandom and source material, and the rage of fans who feel they own fiction. 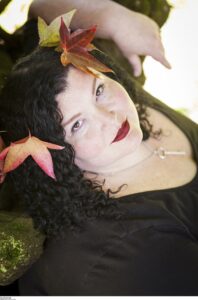 Meg Elison is a California Bay Area author and essayist. She writes science fiction and horror, as well as feminist essays and cultural criticism. She has been published in McSweeney’s Internet Tendency, Fangoria, Fantasy and Science Fiction, Catapult, and many other places.

She is a member of the Science Fiction Writers of America (SFWA) and the National Writers Union (@paythewriter).

Her debut novel, The Book of the Unnamed Midwife won the 2014 Philip K. Dick Award. Her novelette “The Pill” won the 2021 Locus Award. She is a Hugo, Nebula, and Sturgeon Awards finalist. She has been an Otherwise Award honoree twice. Her YA debut, Find Layla, was published in fall 2020 by Skyscape. It was named one of Vanity Fair’s Best 15 Books of 2020.

Elison is a high school dropout and a graduate of UC Berkeley.

Review and Giveaway – The Mirror of Souls by R.J. Duperre
Safeguarding the Surrogate by Delores Fossen – Harlequin Intrigue 2021 Summer Tour