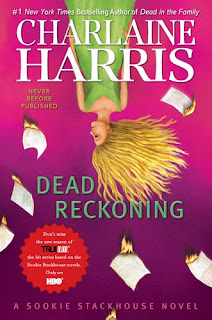 With her knack for being in trouble’s way, Sookie witnesses the firebombing of Merlotte’s, the bar where she works. Since Sam Merlotte is now known to be two-natured, suspicion falls immediately on the anti-shifters in the area. Sookie suspects otherwise, but her attention is divided when she realizes that her lover Eric Northman and his “child” Pam are plotting to kill the vampire who is now their master. Gradually, Sookie is drawn into the plot-which is much more complicated than she knows…

Potential Spoilers if you haven’t read books 1 through 10 of this series.
My Thoughts:﻿
Way back, back to the fall of 2008, I caught the first episode of  a new HBO series. All it took was 15 minutes of watching True Blood and I was on amazon.com ordering all of the available books in Charlaine Harris’ series featuring Sookie Stackhouse. So I lounged on the couch at night, resting my poor pregnant body after a long day of work, and devoured these books. Once I finished them, I started right back over again. I wish that I could say the series has been strong through each of the eleven books. But the last three or so have been a bit lackluster.
Sookie is still working at Merlotte’s as a waitress, seemingly content to never be anything more than that. When wham!, the bar is firebombed. Everyone assumes that it was a hate crime against two natured bar owner Sam since the were’s had come out to humans recently. But we really know better after so many books, don’t we? Just when Sookie and her supernatural flavor of several months boyfriend quash one of her enemies, another one pops out of the woodwork to try and murder our heroine. The hits just keep coming with this book – if I were Sookie, I would have packed it in after book four or so and disappeared to Antarctica or something. But then again, there are probably some were-penguins down there that would try to kill her.  The chick can’t catch a break. And some of her hair gets burned off in the first chapter. What a biotch.
Sookie’s life just isn’t calm and uneventful, no matter how hard she tries. A mind-reading gal can’t go around helping every supe in a fifty mile radius and expect to live a peaceful existence out in the woods by herself. So I get the drama-rama, but you really start to wonder how much more a girl can take before she snaps and takes everyone with her.
Sookie’s vampire boyfriend/husband has big responsibilities as the Sheriff of their area, but his life is super complicated by undue pressure from vampire pain in the ass Victor. Victor has his panties in a bunch since the King of Nevada didn’t name the minion King of Louisiana, so he does what all bad guys do — takes his frustrations out on those under him. Eric is getting all sorts of crap from above and below, since his second in command (and my favorite snarktastic preppy vampire) Pam. Some serious things are cropping up, dealings that Eric’s maker made before he was dusted, and in typical Eric fashion he doesn’t want to tell Sookie about it. Of course Pam is on Sookie’s side with this one and this situation was one of the more surprising curveballs that Charlaine Harris lobs across the plate in Dead Reckoning.
One of the big themes in this eleventh outing for Sookie, is how isolated and alone she really is. As only an eigth fairy, and a mind reading on top of that, she doesn’t really fit in with any of the supernatural beings that flock to her. Even with her fairy cousin Claude and great uncle Dermot living in her house, she is still pretty isolated. She just seems to work and come home, hoping to have a little time with Eric when they can squeeze it in.
Through the course of this book, a lot of loose ends were tied up while a whole new bunch come unraveled. With her known enemies vanquished and her future with Eric uncertain at times, you can really tell that Charlaine Harris is setting up some big things for the remaining two books of Sookie verse. Fans of Bill will enjoy his higher status throughout the book and I did enjoy seeing him take up a little more time of Sookie’s life. But Sookie learns that she can’t really trust anyone, be they family, friends, or foe because everyone has a hidden agenda. And she is often used as a means to their ends, her feelings be damned.
I give this effort a four. I read the book in one day and it flowed pretty well. I was really happy to see Bill and Bubba make reappearances, as well as learning a lot more about Sookie’s Grandmother (who was murdered in book 1). And we finally know how Sookie became a mind reader. In general, Sookie has been on a darker, downward spiral for several books now. And she is definitely realizing that she isn’t where she wants to be. The characters aren’t really growing as much as you might expect, but the books never cover more than a few weeks of Sookie’s life.