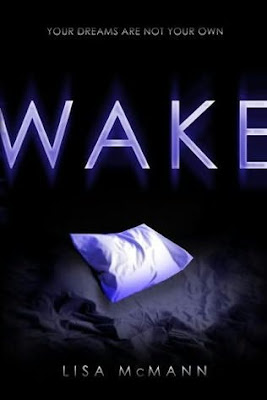 Ever since she was eight years old, high school student Janie Hannagan has been uncontrollably drawn into other people’s dreams, but it is not until she befriends an elderly nursing home patient and becomes involved with an enigmatic fellow-student that she discovers her true power.

Pushy: When I first read about this book on my library’s website I was intrigued right away. I love paranormal stories (I read a lot of Stephen King as a teen) but I’d never read a paranormal story about dreams. So from that perspective this was a refreshing change.

As I got into the story, I found Janie Hannagan to be so easy to relate to. I’m lucky enough to say that my life and Janie’s bear EXCEEDINGLY few similarities, but her character is written so well that it’s so easy to slip into her shoes. And her life is so difficult, between her alcoholic mother and her disability of falling into other people’s dreams, that she’s a very sympathetic character. I liked that she was determined to carve out as much of a normal life as possible for herself: she gets a job, keeps the house running, goes to school everyday and lives as if she had a parent who was invested in her life. She’s tough and determined and I like those qualities about her.

And of course there’s a guy….

Cabel Strumheller is kind of a loner, but cute and sweet…at least outside of his dreams. As Janie gets to know him better, and finds herself liking him more and more, she has to figure out just who he is and learn what his dreams say about him.

I loved Janie’s quest to take control of her disability and her life, the budding romance between Cabel and Janie, loved the intrigue of the drugs and the rich life back story and just enjoyed every moment I spent with these two and the host of secondary characters that are sure to please (even if it’s because they’re just so evil…yeah, I’m talking about you Melinda!).

Cutie: If I were to add anything of value to Pushy’s fantastic review it would be the following: Wake is one of the most uniquely written books I have ever read. It is fast-paced with a first person narrative in the now (does that even make sense?). What pulled me into Janie’s world was Mann’s stylistic writing err.. style (hehe). I have yet to read another series like it. Oh and can I just say that Cabel is nommy and I *heart* him a loooot? I can? Well I do. 😉

An interesting concept is fleshed out into a great story that will have you racing to the end. 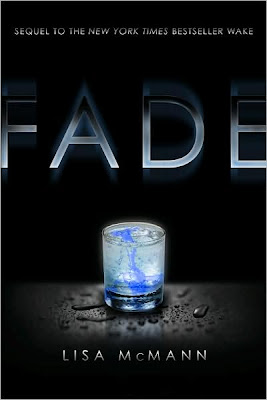 For Janie and Cabel, real life is getting tougher than the dreams. They’re just trying to carve out a little (secret) time together, but no such luck.

Disturbing things are happening at Fieldridge High, yet nobody’s talking. When Janie taps into a classmate’s violent nightmares, the case finally breaks open — but nothing goes as planned. Not even close. Janie’s in way over her head, and Cabe’s shocking behavior has grave consequences for them both.

Worse yet, Janie learns the truth about herself and her ability — and it’s bleak. Seriously, brutally bleak. Not only is her fate as a dream catcher sealed, but what’s to come is way darker than she’d feared….

Pushy: As soon as I finished Wake I was ready to pick up Fade. I couldn’t wait to see what life had in store for Janie and Cabel. But let me warn you from the start…this book is much darker.

Now that Janie knows what Cabel does for a living and has decided to join him in helping the area police department with her ability to enter people’s dreams, I expected the pair to grow closer together and for there to be lots of romantic times. Unfortunately, their first assignment together, to track down a potential sexual predator at their high school, put the breaks on the romance pretty fast.

Of course Cabel is against Janie’s involvement in the case and I honestly agreed with him. I cringed as I read Janie acting as bait to the jerk they’d identified as the main suspect and I was genuinely worried for her safety on a couple of occasions.

What I particularly liked about this dilemma was how it highlighted the sly, seemingly innocuous ways that sexual predators lay their ground work. It was easy to see how they drew their prey in and there are some parts of this book that were just tough to read. Still, very worthwhile, especially when we see good triumph over evil!

Cutie: I too found the book to be creepy crawly disturbing, having three daughters made me super squirmy whilst reading it. What I truly enjoyed about this book was how stead-fast Cabel remained as a character. Many times over sequels only bring love triangles and more relationship drama to the table. Mann went in a totally different direction with Fade. While their love story has it’s share of issues to face (and after reading Wake it would be a no brainer to guess that these two love birds have a lot of healing to do before they can be in a healthy relationship with one another) the main focus of Fade is Janie trying to use her “powers” for good, learning what exactly they are, and coming face to face with the ugly truth. 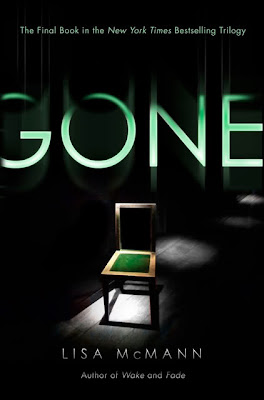 Janie thought she knew what her future held. And she thought she’d made her peace with it. But she can’t handle dragging Cabel down with her.

She knows he will stay with her, despite what she sees in his dreams. He’s amazing. And she’s a train wreck. Janie sees only one way to give him the life he deserves: She has to disappear. And it’s going to kill them both.

Then a stranger enters her life — and everything unravels. The future Janie once faced now has an ominous twist, and her choices are more dire than she’d ever thought possible. She alone must decide between the lesser of two evils. And time is running out…

Pushy: In this last installment of the Dream Catcher’s Series, Janie’s big conflict is internal. At the end of Fade, Janie is given some information about her condition and in this book she’s forced to look at what her condition means for her, for those who love her and what the future will hold.

What I liked most about Gone was that Janie grows as a person. In the previous two books, she’s forced to be strong, all the time, and while she’s good at that, it doesn’t give her room to move forward, only to continue to tread water. In Gone, Janie’s given the space to think about who she wants to be and what she’s willing to sacrifice to be that person. She faces tough choices and occasionally falls into the whiny despair that is the hallmark of teens, but I felt that after all she’d been through in the previous books, she deserved a few moments of self-indulgent pity.

The secondary characters also get a chance to shine in Gone, Captain Komisky in particularly touched me in this book, but even Janie’s mother is fleshed out.

I found Gone to be the perfect ending for Janie’s tale. Her story goes on, of course, but in a new direction and when I read the last page, I had that serene moment of joy for having been a part of something wonderful.

Cutie: Pushy hit it on the head, as per usual! At the heart of the Dream Catcher series is Janie and her personal growth. Yes, there is a love story. Yes, there are lots of mysteries to uncover. But mainly, there is Janie, her strange dream catching abilities, and her choice as to how she will live with it. My respect for her was great at the end of this novel and I felt a total peace and joy for her life, even though it would never be perfect.

A great final chapter in the Dream Catcher’s Series.

cutie note: what a lovely ending to a wonderful series!

Lisa McMann is one of those truly insightful authors who knows that when her fans fall in love with the romantic lead, you throw those fans a bone. And thank heavens for that because if you love Cabel (and we SO do!!) you’ll need to head straight over to her site to read Cabel’s side of the story from when he decides that he’s willing to take the leap in Wake. It’s short and sweet and perfect. Thank you, Ms. McMann!!!!!!!! (cutie note: More Cabel is a very very good thing!!)

Also, while you’re at it, check out her new book that’s scheduled for release in February, Cryer’s Cross: 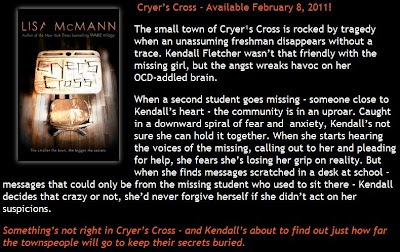 It’s definitely on my to read list!
(cutie note: Mine too.)
Now go and get lost…in a book!
(cutie note: *rushes to do as pushy says*) 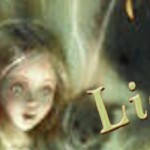 6 Responses to “Review: Wake, Fade and Gone by Lisa McMann”