There are times when I run across an author who’s style
and imagination floor me leaving me in total awe.
Recently, I read two novels by the author Laura
Whitcomb The Fetch and A Certain Slant of
Light. I was enthralled not only with the
stories but with the author’s beautiful
voice and style.This post is about
one of those books: 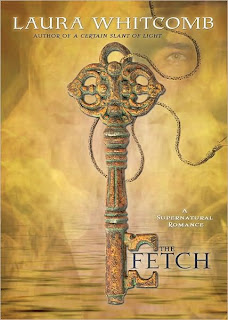 Calder is a Fetch. What is a Fetch? A fetch is a keeper of a key which locks and opens death’s doors. When a soul is facing death, death’s door opens upon the death scene and a Fetch arrives to guide the soul through death’s door, down the Aisle of Unearthing which takes the soul through the Theatre, the Feast, the Gallery, the Garden, and the Cell, and lastly towards the boat and Captain that will take the soul to heaven. To put it in the most basic of terms, a Fetch comes to fetch our souls to heaven. Calder was chosen by a fellow Fetch, Liam, as an apprentice while he was dying. Instead of passing on into the next world, Calder chose to take Liam as his master Fetch. He has been a Fetch for 330 years. He has guided many souls to heaven, has been faithful to the code, completely forgotten his life on Earth, and never once slipped up… that is until he sees his “Glory.” A woman who’s love for a young dying boy bewitches him. Throwing aside all reason, Calder searches out “Glory” in the real world by convincing a soul to go back through death’s door and allow Calder to use his body. This sets the soul free into the land of souls.

A mouthful, no? Imaginative, right? That would be enough don’t you think? But wait, there’s more. For Calder doesn’t just fall in love with anyone, he falls in love with what he assumes is a servant to the Romanov family during the year 1912. And the man’s body whom he posses brings him right into the heart of the Russian revolution. Calder’s actions causes turmoil in the world of the living and the world of the souls. Once he realizes how foolish he has been and the extent of the damage he has caused, Calder sets out to make things right and finds love he never expected. Along the way, he remembers his past, helps a lost soul, and learns to forgive himself.

The Fetch is a wildly imaginative book, one that is beautiful written. I was instantly caught up in the world Ms. Whitcomb created. This is not a perfect book. Calder’s journey and the “rules” of the Fetch world are sometimes vague and there were moments I honestly didn’t understand what was happening. On top of that, the book can just feel flat out weird, knowing that Calder is walking around in a dead man’s body while falling in love is a bit jarring. However, it’s so beautiful written, so insanely different, and just flat out interesting that it didn’t matter to me.

A word of warning, this book’s happy ending isn’t without heart break. I was crying with tears of joy and sorrow at the end of this novel. I would love to read a sequel, but I also wonder if this is one of those times when it is best for the reader’s imagination to take the story where it will.

Due to a few confusing plot moments I’m gonna give this book
4 book stacks, however, it’s leaning heavily towards a 5.

In conclusion:
Look for the review of A Certain Slant of Light
in the next few weeks or simply pick it up and see
what you think of it. For now….
Tis what I know and what I’ve got.
Until next time —
Yours truly,

Be Wild with Half-Bad and the Sequel: Half-Wild by Sally Green – Giveaway!
Review: The Scarpetta Factor by Patricia Cornwell
Review: Before I Fall by Lauren Oliver

« Review: Black Box by Julie Schumacher
Blog Hop (with a twist) and weekly round up »

3 Responses to “flights of fancy”