I’m back today after a short break for a death in the family and a really badly timed sinus infection on my part to bring you an excerpt for Nadine Matheson’s latest thriller, THE BINDING ROOM. I often enjoy books like this that are written by attorneys since they have a unique perspective to the fictional world they write about. Check out the excerpt below and links to buy the book.

“We all lost,” said DS Paul Stanford as he held out a Quality Street tin in front of Henley.

“What on earth are you talking about?” Henley asked as she took off her coat and flung it onto a spare desk. “Are there any toffee pennies in there?”

“You might want to keep your coat on. The heating’s on the blink again. Either that or they’ve forgotten all about us and haven’t paid the bill. There’s a hundred and forty pounds in the pot and no toffee pennies.”

“Why is there a hundred and forty quid in there?”

Stanford rolled his eyes in mock exasperation. “Remember our bet?” he said. “On him. Our illustrious fully fledged Detective Constable Ramouter.”

“What have I done?” Ramouter asked from his position in the kitchen where he’d been eyeing the bottom of a mug with disgust.

“This is ridiculous,” Henley said. Her ears picked up the whirr coming from the electric fan heaters and the ice-fueled wind whistling outside and rattling the glass.

“You lasted, Ramouter; that’s what you did,” said Stanford. “We had a bet on how long you would last in the SCU.”

“And you didn’t think that I would last six months?” asked Ramouter as he picked up another mug.

“Mate, I didn’t think you would last six days. I’ll have a coffee if you’re making.”

“You shouldn’t be so mean to him,” said Henley as she took off her scarf and pushed it against the rotting frame of the window to block the icy draft that was sweeping across her desk.

“How am I being mean? I’m paying him a bloody compliment. After everything that happened, no one would have blamed him if he’d bolted for the door.”

“I could give Ramouter the money. He could spend it on a train ticket to Bradford or something.”

“Now who’s getting soft?” Henley said. The phone on her desk started to ring.

“Or I could book a table at the curry house down the road. It will be teambuilding.”

“Or a normal Friday night out with you falling asleep in your chili chicken.”

“Rude,” Stanford replied as Henley picked up the phone and Ramouter appeared by his side with a mug of steaming coffee for him.

“Right. I see,” said Henley, reaching for the pad of blue Post-it notes on her desk and a ballpoint pen with a chewed cap. “I didn’t realize that we were still on duty. Can you send me the CAD details? No, I can’t get it myself because the system has crashed again. Thank you. Who found the body? Right.”

Henley pulled off the Post-it note and stuck it to the side of Ramouter’s mug. He peeled it off and looked at it quizzically. “Depending on traffic, we should be there in fifteen minutes.”

“You’re not going to have time to finish that,” said Henley, putting the phone down and grabbing her scarf.

“There’s a body in a church?” Ramouter said as he read the note. “Seriously?”

“Why are we dealing with this?”

“We’re dealing with it because the borough commander decided that the Serial Crime Unit should be helping out Homicide and Serious Crime with their caseload,” Henley replied wearily.

“Anyone would think that we were just sitting here watching Netflix all day,” Ramouter moaned. “Is it even a murder?”

“We won’t know until we get there, will we?”

“Can I say it?” asked Stanford, a grin spreading across his face.

“No, you can’t,” Henley replied. She picked up her bag and headed toward the door, with Ramouter in tow. She knew Stanford well enough to know exactly what he was going to say.

“I bet you a tenner that it was the Reverend Green with a candlestick in the library,” Stanford shouted out as Henley slammed the door shut behind her.

“I’m not telling you again. Step away from the tape.”

“If I knew I was going to spend the afternoon standing out in the freezing cold I would have stayed in bed this morning.”

“I bet that they’ve found a body or something.”

“Look, those CSI lot have turned up.”

“I only popped out for a coffee and now the old bill are saying that I can’t go back into my own office.”

“I’m telling you that they’ve found a body.”

“Wouldn’t be the first time.”

“I don’t understand these kids. Too busy stabbing each other up. No value for life.”

“You can dress it up as much as you like. It’s Deptford innit.”

The murmurings of the curious and disgruntled crowd met Henley and Ramouter as they walked toward the scene of the crime.

“This is a church?” Ramouter asked as he looked up at the cream-colored facade of the brickwork. “I was expecting something a bit more… I don’t know, church-like. Maybe a steeple. This looks like a bank.”

“It used to be a NatWest when I was seventeen. The space was once cheap to rent. Not so sure now,” Henley replied.

“I did a quick Google search—”

“Of course you did.”

“And there’s another seven churches on the Broadway.”

Henley and Ramouter held up their warrant cards to the officer behind the police tape. Henley scoped the gathering crowd. Nothing about them raised any alarms, but she knew from experience that some murderers were voyeuristic by nature.

“Look likes Dr. Choi is here,” Ramouter said, pointing out the car of Henley’s friend and the Serial Crime Unit’s favorite pathologist, parked between a police motorbike and small white transit van that had ‘Forensic Services Crime Scene Investigation’ marked in black font on the side.

Henley stopped and looked around the small car park. There were no security cameras. She felt a sense of calm as she walked closer to the crime scene. It was a welcome emotion and a respite from the anxiety that was usually coursing through her veins, which she could keep at bay if she bothered to take her prescription to the chemist. She spotted the police officer that she was looking for leaning against the side of a police car, flipping through the pages of his notebook with a pen in his mouth.

PC Tanaka looked up and then stood to attention a little bit too quickly as Henley walked toward him.

“This is my colleague, DC Ramouter.”

“Shit,” said PC Tanaka when he dropped his notebook. “Sorry.” He brushed off slush from the cover. “It’s bloody freezing.”

“You were first on scene?” Henley asked.

Tanaka nodded. Henley could tell that he wanted to get it right. Giving a senior officer information about a murder scene was a lot different to dealing with burglaries, domestics and breaking up a fight between a couple of crackheads at the bottom of the high street.

“We, that’s the sarge, Sergeant Rivers, and I were driving back to the station. We’re based around the corner at Deptford station. We had just finished our shifts and was coming back from the McDonald’s up the road…”

Henley felt sorry for him as nerves or possibly shock overtook him. She saw a look of sympathy on Ramouter’s face as they both waited for PC Tanaka to continue.

“Sorry, guv, I mean ma’am,” said PC Tanaka straightening himself again and lowering the volume on his crackling police radio. “As I said, we were heading back to the station and one of the guys who works in the design agency practically threw himself onto the bonnet of the car. He was screaming about a body. We found the cleaner in hysterics in the staffroom of the agency. She refused to leave and take us to the church. I left her with the sarge and I went into the church and yeah, I won’t forget what I saw.”

About THE BINDING ROOM 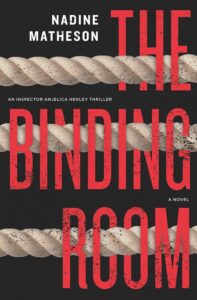 Detective Anjelica Henley confronts a series of ritualistic murders in this heart-pounding thriller about race, power and the corrupt institutions that threaten us for fans of S.A. Crosby and Tami Hoag.

When Detective Anjelica Henley is called to investigate the murder of popular preacher in his own church, she discovers a second victim, tortured and tied to a bed in an upstairs room. He is alive, but barely, and his body show signs of a dark religious ritual.

With a revolving list of suspects and the media spotlight firmly on her, Henley is left with more questions than answers as she attempts to untangle both crimes. But when another body appears, the case takes on a new urgency. Unless she can apprehend the killer, the next victim may just be Henley herself. 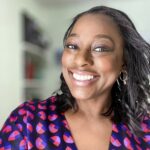 Nadine Matheson is a criminal defense attorney and winner of the City University Crime Writing competition. She lives in London, UK. 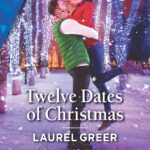