Sedaris remembers his father's dinnertime attire (shirtsleeves and underpants), his first colonoscopy (remarkably pleasant), and the time he considered buying the skeleton of a murdered Pygmy.

With Let's Explore Diabetes with Owls, David Sedaris shows once again why his work has been called "hilarious, elegant, and surprisingly moving" (Washington Post).

Pushy:  As soon as I learned that David Sedaris had written another book, I couldn’t wait to read it!  There’s something so sly and wry and undeniably entertaining about his prose, particularly the way he can bare his soul so fully to the reader and still maintain a self-effacing humor throughout!  And when I learned he was the narrator for the audiobook version, I was even more excited!

Heather:  I’ve been a big fan of David Sedaris since his 2000 publication of Me Talk Pretty One Day. I really enjoyed listening to this book, especially since he was the narrator, knowing that he lived through all of the hilariously quirky stories.

Pushy:  I think my favorite piece was OBAMA!  I loved the perspective he provided on how Europeans first viewed the Presidential Race of 2008 and how Sedaris’s own experiences dovetailed into it.  I also ADORED hearing his imitation of his friends, neighbors and barely acquaintances screaming the name “Obama” at him in approbation and disbelief!  PRICELESS!!!

Heather:  The Obama one had me laughing too, even though I listened to it last week while I still worked at my federal job while our US government was shut down. This audiobook certainly made me smile when doing my job wasn’t much fun in this uncertain political climate right now, so the Obama piece had me thinking a bit differently than it did Pushy, but it was funny none the less.

One of my favorite stories was about the various dentists he went to in France, and how very different each one was personality wise. I also really loved hearing more about his father and his preferred way of walking around in his underwear at home after work. So funny, but so true. Back in the sixties and seventies, the father’s ruled the roost, so I wouldn’t expect less from this protective, skeptical father. I also really loved the weird short stories at the end of the book. They were so entertainingly out there!

As we mentioned above, we listened to the audiobook provided by Hachette Audio

Get your own Audiobooks at Audible: Let’s Explore Diabetes With Owls.

There’s something unique to David Sedaris’s voice, something that his fans from his earlier work on NPR (hello, Santaland Diaries, anyone?!?) know adds just the right note to his prose.  His voice, his particular inflections and cadence truly make his work come alive and this is one Audiobook that should NOT be missed!

And now go and get lost….in a book! 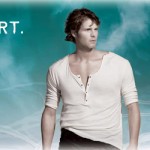