Mia Price is a lightning addict. She’s survived countless strikes, but her craving to connect to the energy in storms endangers her life and the lives of those around her.Los Angeles, where lightning rarely strikes, is one of the few places Mia feels safe from her addiction. But when an earthquake devastates the city, her haven is transformed into a minefield of chaos and danger. The beaches become massive tent cities. Downtown is a crumbling wasteland, where a traveling party moves to a different empty building each night, the revelers drawn to the destruction by a force they cannot deny. Two warring cults rise to power, and both see Mia as the key to their opposing doomsday prophecies. They believe she has a connection to the freak electrical storm that caused the quake, and to the far more devastating storm that is yet to come.Mia wants to trust the enigmatic and alluring Jeremy when he promises to protect her, but she fears he isn’t who he claims to be. In the end, the passion and power that brought them together could be their downfall. When the final disaster strikes, Mia must risk unleashing the full horror of her strength to save the people she loves, or lose everything.

The cover is quite catching, right? In addition to this great cover art, I was more intrigued. Already the first sentence made me want to figure out what the heck is going on :” Mia Price is a lightning addict”. I mean, what does that tell us? I had no idea but was eager to find out!

Earthquake destroys our civilization – not a fun place to be anymore…

In each Dystopian world there has to be a cause, an atomic bomb, global warming or  an earthquake as it is the case here. Struck is set closely after this catastrophic event and so Mia still knows how it was to live in a save world. That’s a setting I actually like, instead of those dystopian novels where the protagonists have no idea about the “before”. Mia however, has to deal with these new circumstances and she has to handle the trauma this earth shattering event entails. Especially her mother is deeply traumatized and suddenly Mia has to not only to take care of herself, but also of her mother and brother. The whole city lies in ruins and whole parts are completely destroyed. To get slowly back on track, Mia and her brother start to go back to school, to get some normality although it seems nearly impossible!

This was indeed something I wanted to figure out, what is a Lightening Addict? Mia has been struck by lightening many times before and each struck leaves a visible and horrible scar on her body, which is why she tries to hide those uglies from strangers. But instead of being appalled or scared, she even craves it! This revelation plays big part of the mystery surrounding Mia’s character but also adds a quite interesting paranormal edge to this dystopian novel! I liked Mia as a character,she was extremely strong – shoulders all those responsibilities and takes care of her family. Also, Mia is smart enough not to get sugar talked by others and she has a strong mind of her own!  At the same time, Mia has no idea why she gets struck so often and what it means for her. It’s Mia’s journey to figure this out and we follow her closely, eager to find out what this is all about. Add to this mix two mysterious groups that fight for her allegiance and suddenly Mia is inbetween some more life altering events but has no idea who to trust…

The secondary characters were quite fetching and made the story more captivating for me. My all time favorite is Jeremy – “the new boy at school, who’s enigmatic and alluring”. Truth to be told, you will find such a guy in nearly ever YA story, however I really loved Jeremy! (One funny side note: He’s wears dark Clark Kent Glasses – I’m sorry but am I the only one that finds this cute ?) Jeremy is darkly mysterious and we are eager to find out the mystery  behind this boy, what agenda he is following and … who he is? Also, Jeremy will break our heart during this novel a few times, but for me he was the shining star in this book! In addition, we have several other characters that added to the story and I loved to explore all those different types of character! Clearly, the vast cast of diverse characters rocked the pot for me!

Truth to be told, I had a hard time getting into the story. The World building was very slow and I was always confused by the rules and secrets in this story. However, it was on us to discover those mysteries together with Mia. This initial confusion was keeping me from getting sucked into this story completely. It was for Jeremy and Mia that I kept reading. The plot starts getting more alluring in the middle and this is where I started to be fascinated and when I became enthralled enough to keep on reading. The final part comes with a lot of surprising and fascinating twists that I didn’t see coming.
In the end, I really enjoyed this book and became deeply engaged with Mia and Jeremy. However, there is yet so much for us to figure out, so Struck is really about setting the stage for the sequel and the following stories in this series!

Struck comes with a great cast of mesmerizing characters that will hold you captive. Mia is a wonderful strong, smart and genuine heroine, who simply does not wish to be the hero that saves the day!  A very strong ending with some surprising twists make up for a initial confusing and a slow beginning. Fans of Dystopians with a paranormal twist will enjoy this story and will be eager to find out more about Mia and Jeremy.  There is no real disclosure, so we have to hope for the next book fo find out more about Mia and her world!

Additional Notes: There is a pre-quel coming out April 25th and deals with the evil villain in Struck! I tempt to read pre-quels after I read the first book, but if you want to get a glimpse into the world of Struck and have a thing for the evil characters, then you should consider getting it!
Much Love, 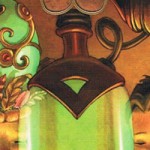