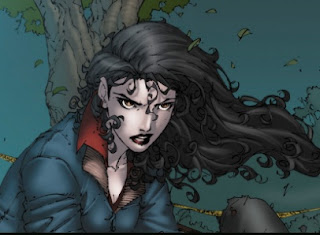 Anita Blake, Vampire Hunter
by Laurell K Hamilton
Various Titles (there are 20 in all so far)
Author website
Hello there voracious readers! Remember waaaaaay back when, I was ‘saving’ a couple of series for when the weather got bad and I got bored waiting for the ‘hottest’ new thing? One of these series was the Anita Blake Vampire Hunter series by Laurell K Hamilton.
Now, I was going to write a little post on both the Hamilton books and my other tasty, trashy treat that I lovingly refer to as Hottie Highlander p0rn. But I decided that both series really needed their own post, so I’m starting with the creepy, and also kinda hot, vampire series.
At the moment I’m at book 10, having finished Obsidian Butterfly a couple of nights ago. This review isn’t going to be very thorough, but I can give you a gist on what’s going on so far and why I’m so hooked into this series!
In honor of book 10, I’m gonna list 10 things I love about these books:
1. Anita Blake is a kick-ass chick. She can get a bit mushy and sentimental at times, and also seems to change her mind a lot, but I can’t hold it against the tiny in stature and big on guns star of the series. She is also realizing how much power she has and is FINALLY (Book 10 people!) figuring out how to use it.
2. I love how the world she lives in is just put out there as normal. Anita’s main job is as an Animator. She raises the dead, ie zombies, for a living. You know, to answer questions and help family members figure out wills, etc. Also, trolls, vampires, wolfmen, voodoo priests, aztec gods, and various other mythological creatures are REAL. I love that and have totally bought in! 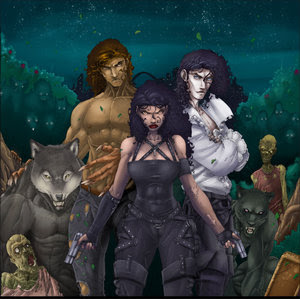 3. The dreaded love triangle. Yes, I usually hate it – but I’m digging it for some reason. There is the 300+ year old vampire hotness that is Jean-Claude. By the way, his special power is fueled by lust. Enough said. And then Richard, who goes furry every month, is a werewolf. Hot!
4. Gore. I usually don’t like it – but I’m digging the blood and guts. There is a lot of blood and guts.
5. Guns. Who knew there was so much I needed to know about firearms.
6. Dated references totally crack me up. This series was started right after I started college. There are wind suits, questionable colors and fanny packs galore!
7. Fast paced fun. I enjoy just diving in and not having to worry about remembering things. Sometimes reading everything back to back gets a bit monotonous, but generally, I’m enjoying it.
8. The bad guys ROCK in these stories. Each book focuses on a different problem. Sometimes it’s purely a love triangle problem and learning how she is deal with dating both guys. Yeah, BOTH guys. The others deal with police business and solving paranormal crimes. And others are personal attacks on Anita and her entourage. Each book is a surprise, and I love it. (I don’t read the summaries, I just jump in on the next book of the series.
9. The writing style is quick and snappy. Only in the last book I read did I feel it dragged a bit and needed one more trip through the editor. Other than that, I really enjoy Hamilton’s tongue in cheek style. As well as her love for all of the characters.
10. Ok – if any of you have read these books, will you be thrilled to know I’m keeping Edward as my final favorite thing. Edward is a killer. He’s human and is a legit bounty hunter by trade. However, on the not so up and up he’s a hired assassin and he works for whoever can pay him the most. He also happens to be Anita’s closest friend. I ADORE him. He is a badass, is a stone cold killer and yet has this little tiny soft and mushy part lurking inside of him. These books would not be the same without Edward.
So that’s my quick and dirty summary. If you are looking for a fun series to read over the winter months, love a bit of mystery, sex, and getting to know a whole new world, with a kick ass chick leading the way – these books would be perfect for you!