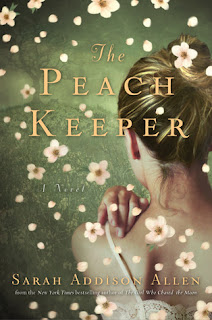 The Peach Keeper
by Sarah Addison Allen
Published by Bantam on March 22, 2011
273 Pages
Synopsis from Goodreads:

The New York Times bestselling author of The Girl Who Chased the Moon welcomes you to her newest locale: Walls of Water, North Carolina, where the secrets are thicker than the fog from the town’s famous waterfalls, and the stuff of superstition is just as real as you want it to be.

It’s the dubious distinction of thirty-year-old Willa Jackson to hail from a fine old Southern family of means that met with financial ruin generations ago. The Blue Ridge Madam—built by Willa’s great-great-grandfather during Walls of Water’s heyday, and once the town’s grandest home—has stood for years as a lonely monument to misfortune and scandal. And Willa herself has long strived to build a life beyond the brooding Jackson family shadow. No easy task in a town shaped by years of tradition and the well-marked boundaries of the haves and have-nots.

But Willa has lately learned that an old classmate—socialite do-gooder Paxton Osgood—of the very prominent Osgood family, has restored the Blue Ridge Madam to her former glory, with plans to open a top-flight inn. Maybe, at last, the troubled past can be laid to rest while something new and wonderful rises from its ashes. But what rises instead is a skeleton, found buried beneath the property’s lone peach tree, and certain to drag up dire consequences along with it.

For the bones—those of charismatic traveling salesman Tucker Devlin, who worked his dark charms on Walls of Water seventy-five years ago—are not all that lay hidden out of sight and mind. Long-kept secrets surrounding the troubling remains have also come to light, seemingly heralded by a spate of sudden strange occurrences throughout the town.

Now, thrust together in an unlikely friendship, united by a full-blooded mystery, Willa and Paxton must confront the dangerous passions and tragic betrayals that once bound their families—and uncover truths of the long-dead that have transcended time and defied the grave to touch the hearts and souls of the living.

Resonant with insight into the deep and lasting power of friendship, love, and tradition, The Peach Keeper is a portrait of the unshakable bonds that—in good times and bad, from one generation to the next—endure forever

My Thoughts:My first impression upon opening the package that contained this book was “Something sure smells good.” Someone thoughtfully sent a peach scented Yankee votive candle along with the book. Normally, I wouldn’t advise people to add something scented to a package. It’s a nice touch, but as someone who is allergic to so many perfumes and chemicals, one errant scent and I’m in the emergency room. Luckily, I was just able to enjoy the scent of ripe peaches with no reaction for me.
I usually don’t pay any attention to covers, but this one stood out to me immediately with its haunting beauty. In The Peach Keeper, Sarah Addison Allen paints a clear portrait of southern life in North Carolina and what it’s like to live in a sleepy and picturesque town, trying to carve out a little niche for yourself.
Willa returned to the small town, Walls of Water, North Carolina, when her father died in an automobile accident. As a college dropout who never felt like she belonged in her small hometown, she reluctantly moves into her childhood home and opens a sporting goods store/coffee shop. She leads a very boring life and chooses to have few friends. Being a responsible adult is how she thinks that she can best honor her father’s memory after being the school prankster during high school.
Paxton is the town’s leading socialite, never having moved out from her childhood home and living a life of charity. Her family buys a decaying mansion, The Blue Ridge Madam, which once belonged to Willa’s family before they suffered financial ruin in the early 1900s when the surrounding area could no longer be logged after it was converted to national park land. She seemingly tirelessly works to renovate the mansion to turn it into a bed and breakfast, but when a skeleton turns up when a peach tree is uprooted to plant a larger tree, the entire project is in question.
The blame for the skeleton of a traveling salesman turns to Willa’s grandmother Georgie and Paxton’s grandmother Adele. As Willa and Paxton form an unlikely friendship to find out who really murdered the salesman, secrets from their family’s past come to light and raise even more questions.
Paxton’s brother Colin, who has barely spent a few days here and there back home, returns to Walls of Water to help with the landscaping. Having a completely skewed view of Willa from her days as a prankster and what she should be like today, he pursures her even when she tries to keep some distance between them.
The mystery of who was murdered and who did it was explored by the characters, but it takes a secondary seat to their evolving friendships. The Peach Keeper is an entrancing tale of families, love, and being true to yourself first. Loss and regret play a main part in each character’s story as well. With a little bit of possible ghosts trying to guide the living towards the truth, this was a very enjoyable and quick read. 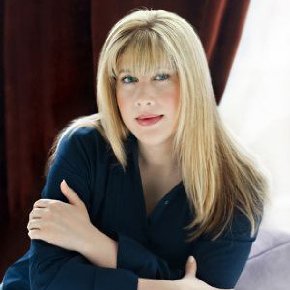 You find Sarah Addison Allen in the following places:

And now for the giveaway courtesy of Bantam and TLC Book Tours. The giveaway is open to US/Canada residents only and you have until Midnight CST April 25, 2011 to leave fill out the form below. Good luck!

A big thank you to TLC Book Tours and Bantam for letting Bewitched Bookworms in on this great book and tour!

Would You Rather by Allison Ashley

6 Responses to “The Peach Keeper Blog Tour: Review and Contest”