Pushy: When we first start this book, we see Abbey dealing with the death of her best friend, Kristen, and I really felt for her. As she tries to come to terms with the fact that her best friend is no longer with her, Abbey has to deal with jerks at school and parents that just don’t seem to understand her. And then along comes Caspian, whom she forms an instant connection with. He saves her in so many ways and yet he adds to her troubles with his hot and cold affections. Yet he helps her focus on new things again and heal even if Abbey can’t tell whether he wants to be more than just friends. She starts making her perfumes again and looking forward to the future.

This book has so much going for it: a mysterious murder, a highly angsty romance and a super cool tie in into The Legend of Sleepy Hollow. And yet…it just fell flat for me. I felt as if the story could have been tightened up. At over 500 pages long it could easily have had a couple of hundred cut and I think it would have been a better book for it. So much minutia of Abbey’s day are in those pages, details that don’t feel important. Also, because of the generous amount of details, I kept thinking that they would lead to something significant and there was never a pay off. Then there was an information dump in the last 30 pages that left me feeling whip-lashed and still didn’t even come close to answering my questions.

Still, despite the fact that I felt robbed at the end of the book, I definitely wanted to read the next book, in hopes of getting the pay off for the themes that I watched being developed in the first book.

cutie: Okay. *sighs* I was not fond of this book. I truly, truly hate saying that, but it’s the truth. When I first heard the premise of this novel I was through the roof excited. I adore the Legend of Sleepy Hollow. I’m a die hard fan of the original novel, the Disney cartoon, and the Tim Burton’s movie. Going into this novel I was ready to fall passionately in love with it. Maybe it was my high expectations that caused the book to fall flat for me, but, in all honesty, I really don’t think that was the problem.

As Pushy stated above, the minute to minute details of Abbey’s day drove me nuts. Ten pages talking about her grooming habits or her perfume creating was just unnecessary. Clearly the editors’ red pens ran out or they just forgot how to use them. Also, I just sorta got tired of Abbey’s complaining. I get the whole “misunderstood” teenager thing, I lived it, but this was beyond that. Frankly, the pity parade got old, and by the end of the novel I just didn’t care for her much.

As far as the ending is concerned, I too was disappointed. I felt after all the time I spent invested in the day to day habits of Abbey the end would have some sort of awesome twist or turn that I didn’t see coming. Sadly, the ending just fell flat and I was left frustrated and uninterested in reading the next book. Truth be told, I have attempted to pick up the second book many times over, but just haven’t been able to get myself to read the whole darn thing. I am dragging my feet my friends, and poor Pushy has been waiting on me to post this review for a month!

Pushy: While it could have been tighter and more on point, there’s a good story at the heart of this book, if you’re willing to be led down the primrose path a bit to get to it.

cutie: After all that, I don’t think this was a terrible book. The author has a strong writing style that is poetic at times. The premise is awesome and the characters aren’t one dimensional. The problem I have with this novel is that it lacks good editing. The story never truly seems to “get going” and at least 200 pages could have been chopped from the novel, which would have given it a better flow.

But Abbey can never get over Caspian, and Caspian has no choice but to return to her side, for Caspian is a Shade, and Abbey is his destiny. They are tied not only to each other, but also to the town of Sleepy Hollow, and to the famous legend that binds their fates—a legend whose dark truths they are only beginning to guess….

Pushy: So this books starts with Abbey post break down. There’s a lot of dithering about how she can handle her life now that she’s had the mental breakdown she experienced at the end of The Hollow. But somehow she bucks up and returns home to spend her summer catching up on the school work she missed out on as she recovered at her aunt’s house. She’s spending a lot of time with Ben and the question of whether or not he wants more than friendship weighs heavily on Abbey. But still he keeps her mind off of what happened in the Sleepy Hollow cemetery and her questions over her own sanity. So does her summer job at her uncle’s ice cream shop.

But creepy things are still afoot in Abbey’s life. There a new guy, Vincent, who had a brief cameo in The Hollow and is back, just as much of a jerk now as he was before. Not to mention the mysterious kids Abbey runs into at the dedication of the Sleepy Hollow Bridge that her best friend Kristen died at. And then there’s Abbey’s mom, who’s acting all kinds of nutty. Strange times indeed!

And yet again, I ended this book feeling ganked! I was no closer to knowing what was going on at the end of The Haunted than I was at the beginning and it was an EXTREMELY frustrating experience. I understand that the author is trying to build the suspense for the next novel, but honestly, there’s only so much building that can go on before I will get fed up. I was SO disappointed that only the barest scraps of information were provided, just enough to set up the next book. And I still have no idea how the whole Sleep Hollow thing ties into the story other than being part of the back drop. Very, very frustrating.

cutie: err… I fail. I still haven’t finished this book.

Pushy: The one word that comes to mind when I think of this book is frustrating. I wanted to like this book, and there are parts about it that I did like. But I found Abbey’s incessant whining frustrating, as was her continual dithering and the constant “Hey! Hey! This will be important later!” details that never get explained.

cutie: While I can’t seem to finish this book at the moment, I do hope to one day go back to it. I feel badly that I can’t seem to care about this story, I truly want to. The pace of the novel is slow, it’s hard to understand what is going on, and the main character spends far too much time brooding. Apparently, I’m down with the brooding male leads, but I need my female protagonist to be above all that. Dude, I’m a sexist and I didn’t even know it! *fail*

Even though we have some serious complaints about how much the author has held back in the first two books, I, Pushy, still have to say….I plan to read the third and final book in this series…. 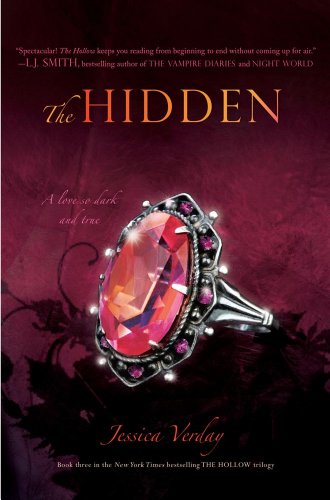 The Hidden will be the third and final book in this series and I have to say that I’m actually dying to read it because I just have to FREAKING KNOW WHAT HAPPENS!!!
Now go and get lost…in a book! 11 Responses to “Review: The Hollow and The Hauntedby Jessica Verday”