Teaser Tuesday and Giveaway Tour Stop for Quarantine: The Loners

Welcome to Teaser Tuesday, and I have an excerpt from Quarantine: The Loners, written by two amazing writers: Lex Hrabe and Thomas Voorhies. It was just another ordinary day at McKinley High—until a massive explosion devastated the school. When loner David Thorpe tried to help his English teacher to safety, the teacher convulsed and died right in front of him. And that was just the beginning. A year later, McKinley has descended into chaos. All the students are infected with a virus that makes them deadly to adults. The school is under military quarantine. The teachers are gone. Violent gangs have formed based on high school social cliques. Without a gang, you’re as good as dead. And David has no gang. It’s just him and his little brother, Will, against the whole school. In this frighteningly dark and captivating novel, Lex Thomas locks readers inside a school where kids don’t fight to be popular, they fight to stay alive.

Now that you’ve seen the description, here’s a little taste from the book:

“David saw a human skeleton weaving through the riot. It shoved people out of its way, throwing its bones into them. It had no jaw. There was a hammer clutched in its fleshless fingers. The skeleton turned to him. Dead, empty eye sockets locked onto David. It ran at him.”

Wow, chilling! What could be worse than a skeleton coming at you? How could you actually kill it? It’s not like there’s any flesh and blood to actually do it much harm. Being on permanent lock down in your school has to be most kids’ nightmare. I know that I would have rather die than be stuck there forever.

And now for the giveaway: Just enter the Rafflecopter below for your chance to win one of two copies of Quarantine: The Loners. Good Luck!

Lex Thomas is the pen name for the writing team of Lex Hrabe and Thomas Voorhies. Their first novel, QUARANTINE: THE LONERS, earned a starred review from Booklist, and Huffington Post Books called it “one of the best books that I have ever read.”

Lex received a BA in Drama and English from the University of Virginia and has worked as an actor, director and writer. Thomas graduated with a Bachelors of Fine Arts from the Rhode Island School of Design, and now writes, and exhibits his realist oil paintings in Los Angeles.

Lex and Thomas met in a writers’ group in Los Angeles. Their friendship developed as they tried to blow each other’s minds with clips from bizarre movies. In 2005, they became a screenwriting team, and found that writing with a friend is much more fun than doing it alone. Visit them at www.lex-thomas.com.
[/box] 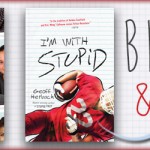 « And The Winner of the Sweet Hope Contest is….
Waiting on Wednesday – Alice in Zombieland by Gena Showalter »

23 Responses to “Teaser Tuesday and Giveaway – Quarantine by Lex Thomas”