Sixteen-year-old Trinity Monsour wants nothing more than to live a normal life. But that isn’t as easy as it seems. Trinity is different. She is special. She sees visions, and for those she’s seen, it’s already too late.
Trinity arrives on her aunt’s doorstep in New Orleans with virtually no knowledge of her mysterious heritage. She begins settling into life at a new school and even starts making friends. But all too quickly her dreams accelerate; twisted, terrifying visions of a girl locked in a dark room. And when the head cheerleader, Jessica, goes missing, Trinity knows she has no choice but to step forward with what she’s seen.
But people believe that Trinity has information about Jessica’s disappearance not because of a dream, but because she is involved. She is kind-of dating Jessica’s ex-boyfriend, Chase, and Jessica did pull a nasty prank on Trinity. Revenge seems like the likeliest scenario.
Nothing prepares Trinity for the dark odyssey that ensues while searching for Jessica, including the surprising romance she finds with Chase, or the shocking truths she learns, not just about the girl who has gone missing, but the past that has been hidden from her.

Isn’t the cover incredibly amazing? I absolutely love the cover as well as the title of the book and the series: “Midnight Dragonfly”, plus when reading the synopsis it is the perfect package that makes you want to read this book -now!

This is the story of Trinity – a girl that lived with her grandmother far away from normal towns but now has moved to live with her aunt. Her parents are dead and there is something about her mom that she still has to figure out…. But, apart from her upbringing – Trinity is different: She has visions, visions that terrify her and she was never able to change what she sees of the future.. Also, her grandma never wanted to talk about Trinity’s visions and encouraged her to never tell anyone.

Being in a new town, she finally makes friends, although some of those friends shouldn’t be considered friends at all. Then when the mean girl disappears and Trinity has visions about this she finally decides to speak up and tries to help…

The beginning was very dark and twisted and also Trinity’s visions were very dark and sometimes very hard to get. I had a hard time getting some of the mysterious plot lines straight – and I was very often left confused.

Trinity’s Aunt was the best!
Trinity was sometimes too reckless and selfish…

I loved however, Trinity’s aunt! She was the sweetest person ever and really loved Trinity and would do anything for her – I also enjoyed the relationship between them which seemed truly genuine and real for me. Trinity herself had really a hard time dealing with her visions and desperately wanting to help, yet she did some reckless things that made me shake my head! I also had some problems with Trinitys relationship to Chase. It was too fast too deep and I didn’t have time to catch up with their love..

Although I had some complains about characters and too twisted plots.  I read through the novel very fast and it was also very entertaining! I’m definitely looking forward seeing how the whole story goes and I will read the next one!

Random Notes and Additional Info:
You really should visit Ellie James’ website , so absolutely beautiful! Also there is another story out: “Haunted Destiny” a short Novella for those anxiously waiting for the next book “Broken Illusions“ which comes out in May 2012. Btw,  I loved when we don’t have to wait a whole year for the next book…
Much Love, 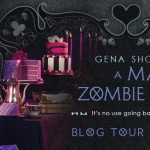