The wars that followed The Collapse nearly destroyed civilization. Now, twenty years later, the world is faced with a choice—rebuild what was or make something new. Stephen Quinn, a quiet and dutiful fifteen-year-old scavenger, travels Post-Collapse America with his Dad and stern ex-Marine Grandfather. They travel light. They keep to themselves. Nothing ever changes. But when his Grandfather passes suddenly and Stephen and his Dad decide to risk it all to save the lives of two strangers, Stephen’s life is turned upside down. With his father terribly injured, Stephen is left alone to make his own choices for the first time. Stephen’s choices lead him to Settler’s Landing, a lost slice of the Pre-Collapse world where he encounters a seemingly benign world of barbecues, baseball games and days spent in a one-room schoolhouse. Distrustful of such tranquility, Stephen quickly falls in with Jenny Tan, the beautiful town outcast. As his relationship with Jenny grows it brings him into violent conflict with the leaders of Settler’s Landing who are determined to remake the world they grew up in, no matter what the cost.

As a big Dystopian genre lover this one was most definitely on my list to read this year. Also, having a closer look at the cover – it can’t get more dystopian than this ,the cover is brilliant for this book and the story and I appreciated it even more after reading the book, since it fits so perfectly!!!

The story is set 20 years after “The Collapse” and normal civilisation does not exist anymore. There are slave hunters, there are thieves and there are “normal” people  that just want to be left alone and who keep to themselves. No electricity, no food – everything is destroyed. As I said, I cannot get more dystopian.

Stephen – our hero and the voice of the story

The story is told from a 15 year old boy POV and his voice was honest and easy to like.
Stephen used to travel with his Grandfather and Father and being raised by them he always followed their lead and orders. He never questioned the choices they made for the family and for him. But, Stephen was young – we meet him now with 15 slowly starting to make up his own mind.

Growing up and making own decisions

And this is also the whole story. How Stephen suddenly has to grow up, making his own decisions and also life with the consequences. The whole development is packed in the story and it was perfectly portrayed, genuine, earnest and easy to follow.

Jenny – the outcast and ….love interest?!

Stephen meets Jenny when he’s forced to trust people and move into a town for some time. Jenny was always a troublemaker, yet she somehow connects with Stephen and they begint to fall for each other. The romance is very very light here and truth to be told, I truly didn’t care much about Jenny and the love story. Which means something coming from my mind. However, one should keep in mind that this book could also appeal MG readers where a bigger love story would have been very wrong…

I liked the book but it didn’t blow me away. The story just moved on slowly and never really caught up pace and excitement. Stephen was a sweet hero, yet there was something lacking that I can’t really put my finger on… I couldn’t care less about the love and Jenny. With those harsh words, I have to say that it is the perfect book for young adults and kids, specially since the book deals with growing up, taking responsibility and for making up your own mind in a very genuine way.

Unabridged
Length: 7 hrs 3 min
Narrator: Dan Bittner
buy at audible
The narration of the audiobook was awesome! Flawless narration, nice voice and also great female voices. I liked the pace and altogether I can just recommend this audiobook to everyone who wants to
read this book and likes a good audiobook!
Happy Monday and a good start in the week,
Much love! 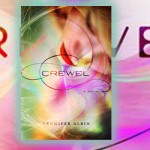 4 Responses to “Book Review: The Eleventh Plague by Jeff Hirsch”