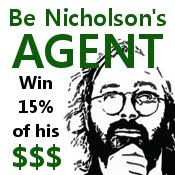 September is sticking around for a few more days, so it’s still “Be Scott Nicholson’s Agent” month. Bewitched Bookworms is representing his book, Disintegration, which is a fabulously twisted thriller (check out my five star review). Scott has graciously provided us with an excerpt from the book to give you, dear readers, a little taste of the book. Check it out, and enter to win a $10 gift card to either Amazon or Barnes. Details below the excerpt. 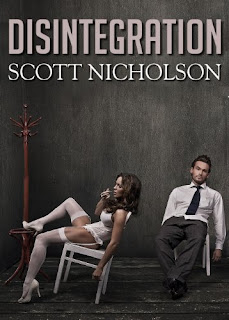 CHAPTER ONE
Jacob Wells smelled smoke seventeen seconds before hell opened its door.
The Appalachian night was just cool enough to require a quilt on top of the bedspread, and he’d sought Renee’s body heat beneath the sheet. One of his wife’s legs was tangled in his, the nail of her big toe digging into his ankle. The weight of her head pressed into that familiar space above his armpit and her hair spilled across his shoulder. Drowsy, he tried to remember where he was, then saw the red glaring numbers. 1:14.
The alarm was set for six a.m., an ugly hour that always came too soon. Jacob rarely slept before reaching the long side of midnight. Every night his sleep shrank, his dreams crammed into tighter and darker crevices, his thoughts spiraling like dirty water down a drain. He had failed, and the knowledge had dull teeth that ground him from the guts up.
Tonight, the dream had been of a mirror that he had somehow fallen into, as if it were a silvery, sunlight sea. He tried to drag himself out, because he couldn’t breathe. When he reached out of the mirror, though, his reflection was on the other side, pushing him back down. Desperate, he grabbed his reflection and pulled it into the mirror with him, and they wrestled in that bottomless, soundless void, joining into one writhing mass that sank and sank ever further from the light.
His eyes snapped open to the black sheet of the ceiling. The pillow was damp at his neck. A breeze blew from somewhere, a crack in the door or window, carrying the March odors of mud and daffodils. Renee stirred beside him, nudging him with a sleepy elbow. Her snores were soft and feminine.
Her scent flooded his nostrils, meadow shampoo and the lingering tang of their lovemaking. She had always been clean, a chronic neat freak, almost to the point of obsession. She loathed perfume, though, and was comfortable with her own natural odors. That was one of Jacob’s favorite things about her. He took another sniff, as if he could carry its memory back into his dreams to give him comfort.
The sniff brought unease instead of comfort. Something was out of place in the too-thick air. Jacob pulled himself from drowsiness. No mistake.
Smoke.
They’d had candles on the nightstand, a ritual dating back to their initial shy fumbling in college when soft light hid minor flaws and made pupils attractively large. But the candles were long cold, and this aroma wasn’t thick and waxy.
It had a chemical sting, and beneath that, the brusque body of burning wood.
Jacob swam the rest of the way up from the waters of half-sleep and pushed Renee’s leg away. Maybe one of the neighbors was burning brush. It was the time of year for yard work, when leaves and ice-damaged branches were raked into large piles in that first spring bloom of homeowner energy. But who would start a brush fire an hour after midnight?
Renee mumbled into the pillows where her face had fallen. Jacob swung his legs over the side of the bed, squeaking the springs. He switched on the bedside lamp. On the nightstand, shielded by a slight sheen of dust, was a framed photograph of Mattie. Except for the crooked primary teeth in her grin, she looked like a miniature of Renee—sea-green eyes, reddish-blond hair, a faint splash of freckles on the swells of her cheeks. Jacob looked at the trusting face.
Another photograph was behind it, lost in shadows.
He sniffed again. Smoke, for sure.

The crime thriller Disintegration is available at Amazon, B&N, and Smashwords. Scott Nicholson is the international bestselling author of more than 20 books, including Liquid Fear, The Skull Ring, and The Red Church. His website is http://www.hauntedcomputer.com/.

This a great book, and it’s $1.99 for the Kindle or Nook, or other formats from Smashwords. It’s well worth the few bucks!