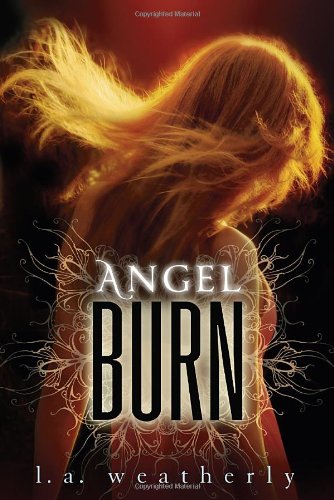 Willow knows she’s different from other girls, and not just because she loves tinkering with cars. Willow has a gift. She can look into the future and know people’s dreams and hopes, their sorrows and regrets, just by touching them. She has no idea where this power comes from. But the assassin, Alex, does. Gorgeous, mysterious Alex knows more about Willow than Willow herself. He knows that her powers link to dark and dangerous forces, and that he’s one of the few humans left who can fight them. When Alex finds himself falling in love with his sworn enemy, he discovers that nothing is as it seems, least of all good and evil. In the first book in an action-packed, romantic trilogy, L..A. Weatherly sends readers on a thrill-ride of a road trip – and depicts the human race at the brink of a future as catastrophic as it is deceptively beautiful.
They’re out for your soul . . . and they don’t have heaven in mind.

First off let me start by saying This book was fantastic!!! Fast faced, wonderful female lead, strong and swoon worthy male lead, intriguing story about angels, this book had it all.

New Angel concept
I love a good angel Story which is why the book intrigued me in the first place. But let me tell you that Angel Burn is so not what you expect from a Angel books, at least it did surprised me totally! Angels are meant to be good, shiny and wonderful but the Angel race Mrs Weatherly created are not that. They are cruel selfish and they are bad.. They don’t care about humans and humanity and take whatever they want from them. They are the enemy to the human race.
Willow, a strong awesome female kick -ass heroine
and
Alex, a swoon worthy hero!
Willow always has been different but she’s never known why. She can see people’s future … but where does that come from? She has to deal with being an outside and with her very ill mother. Way to take for a 16 year old girl, but Willow is strong!
We not only get Willow’s POV but also Alex’s, who is a assassin that hunts and kills Angels. Here, he’s assigned to kill Willow, but he can’t… Killing Angels is one thing, but killing this girl something else.
Soon they are forced to run away together and … they become closer and discover the truth surrounding Willow’s gift and also .. a very disturbing truth about Alex’s life..
Fast paces kick off into a new series!
I was in awe! I couldn’t stop reading, so much is happening all the time. Starting with Alex wanting to kill Willow, but then running off with her. You discover truth after truth together with them and you follow them into beginning of trusting each other and … also falling in love!
I loved the concept, Angels that are captivators rather than saviors. Two kids that discover the truth and try to do something to stop this. To stand up against those evil Angels with the power to destroy humanity.
The plot takes you on a run that won’t allow you to take a breath until it ends and you are left hanging.. Again…
Bottom Line

Unique new face of Angels, evil and disturbing.  A hero and a heroine that shouldn’t fall in love with each other but do against all odds and can’t stand on the sideway seeing humanity being destroyed. Fast paced and full of action and sweetness romance!
Final notes and additional stuff:
You can buy this book as an audio and I heard fantastic things about it. I’m sorry that I’ve read it already otherwise I would have most definitely listened to it. Also, the hardcover looks fantastic!!! I saw it a BEA and wanted to have it – right now! This is one of the books you caress when holding it in your hands…
And, on Facebook there are some inspirational images about Alex and Willow..
Much love my friends and Happy Sunday! « Hereafter by Tara Hudson: a review
Winner of Warm Bodies by Isaac Marion »